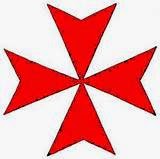 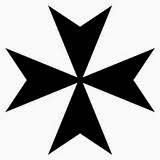 Here's a few connections which I had never made before now.

The Maltese Cross is the insignia of the Order of the Knights of St John who have a 900 year history and who had Malta as their headquarters for over 200 years. They emerged from the Crusades and were a group of Noblemen who chose to live in a religious order with vows of chastity, poverty, obedience etc and dedicated their lives to resisting the Muslim threat to Christendom. These vows were not always adhered to - given that they were a maritime order of fighting noblemen they often behaved like drunken sailors after their conquests. Since 1798 when Napoleon evicted them from Malta they have continued as the Knights of Malta based in Rome and have the same status as the Red Cross in international charity work.

Their insignia has been adopted by many organizations and even incorporated into flags of states. Is that a Maltese Cross I see on the Flag of Quensland, Australia? What's it doing there? The truth is nobody is sure. The flag was designed in the late 19th century and the original plan was to represent Queen Victoria in the design but they couldn't get a likeness so they moved to plan B. Queen Victoria, the Victoria Cross, crosses. The Maltese Cross had some affinity with the Victoria Cross and it seems this was a good enough reason to put it into the design. The designers, it seems,  just liked the Maltese Cross better than the Vicctoria Cross. 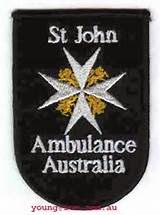 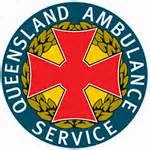 The Maltese Cross appears on insignias of first aid and ambulance services in Australia. The well know and volunteer based St John Ambulance Service clearly has lineage back to the knights but I had never known the connection. The Queensland Ambulance Service uses it on their badge. This is all consistent with the modern Knights of Malta (ST John) who are dedicated to good works.

Strangely the national flag of Malta incorporates the cross of St George rather than the Maltese Cross. This is in recognition of the only time a nation has been awarded the George Cross for bravery. Malta was accorded this honour in recognition of its contribution to the war effort in WWII.  Britain was originally supposed to withdraw after two years - post the defeat of Napolean Bonaparte by Admiral Horation Nelson - but overstayed its welcome by  almost 200 years. Malta achieved independance from Britain in 1964 with the Brits finally departing in 1979

The 8 points of the Maltese Cross are supposed to represent the 8 virtues by which the knights lived.

wonderful post- and the 8 virtues are excellent- although I don't think I could "Endure persecution"
I think I would fight persecution.