I'm off to Tanna - Vanuatu as we speak. Community development project, volcano etc. I think we're prepared.
Will blog from there if i can get connected.
Posted by little hat at 12:17 1 comment: 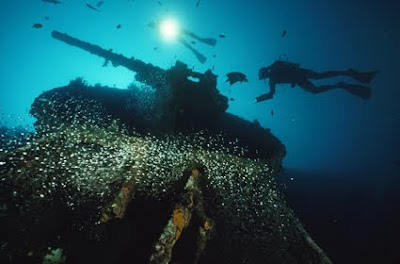 At the end of WW II the Americans, 100,000 of whom had been based on the Vanuatu Island of Santo (pop. today less that 20,000) offered to sell a mountain of equipment to the British and French colonial powers. As New Hebrides, the nation was ruled jointly with two legal systems two police forces etc. Neither took up the offer so the Americans bulldozed the lot into the waters off Luganville (the major town). This included scuttling a major passenger liner the SS President Coolidge which lies peacefully a mere 5o metres off shore as a mecca for scuba divers. I don't scuba dive. I did spent two hours, however, snorkelling over acres of military equipment including bulldozers, forklifts, landing craft etc etc. It was remarkable. Now home to tropical fish and masses of new coral growing in colourfull displays over every surface.

My moment of panic came as I cruised past a large landing craft and there lurking quietly below was a two metre barracuda, long snout and razor sharp teeth causing me to back paddle urgently and check in my rear vision mirror that I wasn't being stalked as lunch as I gently but purposefully headed for a new destination.
Posted by little hat at 10:30 2 comments: 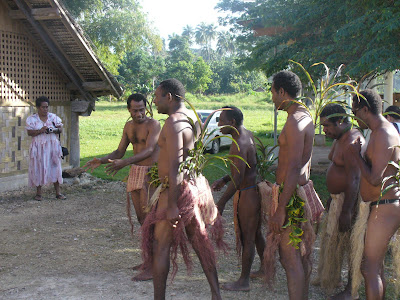 I've just returned from 10 days in Vanuatu working with the local chiefs and community leaders on a project about Kastom Practices and strengthening relationships across villages and islands and families. Vanuatu is an island state in a process of change. The partnership project brings Australian facilitators and local Vanuatu facilitators together to learn from each other. It's a long term project and this past visit was my second but the first where I was in the role of watching and supporting the locals to deliver a 5 day workshop ("Storian") to 35 leaders from the Island of Santo.

It was great. We three Australians were largely irrelevant - a mark of success for us. The most exciting and challenging aspect of the 10 days was the intentional use of local tribal languages and practices where appropriate. At one stage I had tears in my eyes as I watched a powerful reconciliation process unfold while not understanding a single word uttered over about a fifteen minute period.

We return next week to help facilitate a Community Development (Komunity Akshun) 10 day program. This will be on the island of Tanna.

Marina - an Italian connection in Orsago

In 1988 I spent three months in London studying theatre. My wife remained at home in Brisbane working and caring for two children, one 2 and the other 7. She was supportive of my jaunt overseas but ultimately wanted her reward. We agreed to meet in Italy without the kids for two weeks at the end of my study. Thank god for generous grandparents.

We enjoyed a week in Rome, anther few days in Florence and then Venice - the highlight for us. Venice is the capital of the old Venetian Republic and now is part of the Veneto Region in the Province of Treviso which in turn is where my Great grandfather was born arounf 1837/38. I convinced Andrea to take a day trip to Orsago, his supposed birthplace. It was on the trainline. Simple. It was a great day but fruitless in terms of unearthing birth certificates or any church records giving us any new information. The best part of the day was meeting a young girl, Marina Batistuzzi, at the Municipio (Town Hall) who wanted to practice her English and so shut up shop for the rest of the day to accompany us on our search. I've written this visit into the draft of my memoir (see previous blog) and

The trip from Venice north was a short forty-five minutes. We stepped off the train in Orsago to be greeted by a dry and dusty main street. It was June, summer was raging on the northern plains. The 3,900 residents were clearly on siesta. We were on foot with no map, no directions and no language, save good morning and an ability to count to ten – ten words, uno duo tres, which rattled around in my head constantly in some vain attempt to convince myself that I was a native speaker. My mother was a self-confessed counter. She would quite cheerfully tell anyone who wanted to listen, that, not only was she good at English she also loved numbers, to the point of absurdity. She would count out time – in the shower, while drying her hair, peeling carrots. She seemed to think this was normal and I am afraid I may have inherited this quirky aspect of her personality.

Andrea, the pessimist, already doubted the wisdom of spending a precious day on a wild goose chase. I, the optimist, was sure we’d uncover something and, being the eternal pathological version was convinced that the experience would be uplifting in an, as yet, unexpected way. We stepped into the foyer of the Municipio Di Orsago. I recall a white stone building with a large foyer, the type which echoes as you cross the marble floor announcing your presence and in this case sending shivers of anxiety to paralyze my memory where nothing resided beyond numerals.

I hadn’t expected to be proved right so early in our trip, but there behind the counter sat a young woman who was so excited to encounter English speakers with whom she could practice that after a short conversation where ‘buon giorno’ was the only word I needed, she agreed to shut the Municipio for the afternoon and offered to accompany us on our search for Lorenzo. That this was unsuccessful was not the point. The unexpected delight in finding this angel in remote Orsago made the trip worthwhile in itself. We did knock on some priests doors during that afternoon, and in each case they reluctantly agreed to Marina’s request to look at the parish birth records. In each case they were written in long hand in large impressive volumes but without a specific date we were faced with a long and tedious search. Marina was more than happy to drive on a sunny north Italian day and played tour guide as we visited small villages in a game of pin the tail on the donkey. Given that we had so few clues and at that time searching for only one name we were doomed to failure.

Sixteen years later a distant relative, unbeknown to me, also visited Orsago and also made a beeline for the Municipio and also encountered the delightful Marina. As Barry recounts it he approached this young woman, now in her late thirties, and asked for advice regarding his search for records of Lorenzo. As soon as she heard the name she said ‘Oh, there was another man here asking after that name’. Barry was a little shocked as she hurried to the back room and returned with a paper on which was written my contact details. ’Yes’ she confirmed, showing Barry my name as if I had been there the day before, ‘he was also looking for the Capelins”.

So vivid is my memory of that occasion that I still feel a strange connection with Marina 23 years later. I decided to send her an email telling her what I was doing and that i had included her in my book. No response yet but I believe she is still there. I check my in box for her reply each day. Like waiting for a letter from a long lost relative..
Posted by little hat at 17:43 2 comments: