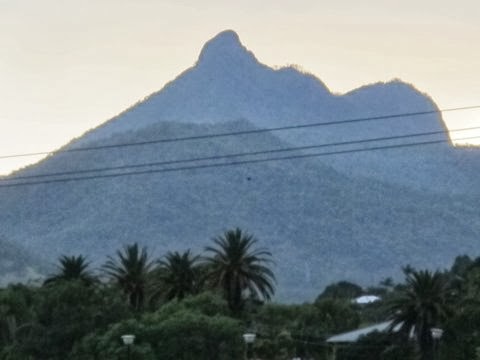 In the foothills of Mt Warning lies the sleepy town of Murwillumbah.

What should we do between Xmas and New Year that won't cost an arm and a leg we asked ourselves.
Go camping? Nah - too hot, too crowded.  What about spend five nights in a youth hostel surrounded by strangers half our age? This suggestion came from Andrea! I'd stayed at the Murwillumbah Youth Hostel en route to Ballina a few times and had described it with affection but I wasn't sure it would be Andrea's idea of a holiday destination. I warned her. She hesitated and then took the plunge.I booked a double room. I'd only ever stayed in the men's dorm room. I wasn't sure what the double room might offer. I had a picture of a double bed bumping up against the wall on all four sides with no space for humans to stand and drunken parties outside our window on the deck. As a backup we invited our friend Lynne to join us and she gamely took up the challenge.

We arrived on the Saturday afternoon (Dec28) via a Currumbin Beach swim. Murwillumbah was closed.

The owner/manager had left a key out for us and we settled into a surprisingly nice room, with standing room and storage space, overlooking the broad murky Tweed River. Mt Warning loomed in the distance. It was beautiful.


We were in the company of two young people from Singapore who were about to begin a traineeship at a Yatala (a most unattractive industrial centre halfway between Brisbane and the Gold Coast. Half way to nowhere). Other guests included two young women backpackers from Holland, another two from Germany, a young architect originally from Zimbabwe; Gary was an ex Navy seaman from the English midlands who has  spent extended holidays at the hostel over a ten year period; a bunch of Czech tourists who appeared late at night desperate for a bed, and Stig. Stig, the ultimate contrast to the cliched young blonde Swedish backpacker. Stig was a bit unnerving. He was a significantly older man who floated silently around the building, pausing ominously outside our room and then drifting on. More of him later.

The owner/manager, Tassie (yes! a Tasmanian) had arrived in town 33 years previously (late '70s) as a young backpacker. Fell in love with the place. Bought this crumbling house high on the banks of the river, registered it as a YHA, did some renovations and a paint job befitting the times. Never left. Never changed the paint scheme.

Come New Year's Eve and all the young backpackers had managed to find accommodation at Byron Bay and we were a group of ten, seven of whom were, shall we say, mature aged. A late addition to the group was Jane who had flown in from Canberra specifically for New Year's Eve. She works in the National War Memorial as an archivist. She's the one who receives and assesses all the offers of photos and memorabilia from families whose WWI and WWII parents are gone, or not much longer with us. Sounded like a richly rewarding job. Turns out Jane has been coming here for twenty-eight years.

It was turning into a reunion.  Not the least because Tassie's local lady-friend, Toni, had offered to cook for us if we were happy to fork out $15 a head. She had run a Thai restaurant in Mullumbimby until recently.

What a memorable night. A five course meal cooked in the shared kitchen by Toni  - assisted by the young Singaporean couple who loved the opportunity of finding a role in our wacky Australian evening. We ate till midnight and, surrounded by a deathly silent Murwillumbah, toasted the new year and promptly disappeared to our beds.

Stig was the surprise of our stay. Not only did he show a great sense of taste in his choice of hat for the evening, but he had a great story to tell. He's 76 years of age and is travelling in Australia for a year. He has seen it all, having spent a previous twelve months here a few years ago. He was an engineer by training and had worked most of his life in third world countries, mostly Africa, for the UN involved in development projects. His memory was razor sharp, his energy unfailing - he had  caught a coastal freighter north from Cairns to Thursday Island and then bumped his way down the Gulf in a 4WD on a group tour. He had then made his way to the Laura Dance Festival by hitch-hiking (when his arranged transport failed to arrive at a remote intersection 50 ks west of Cooktown), and then slept on the ground under a tree. He even agreed to swim with me in the Tweed River despite his misgivings about the bull sharks I had told him lurked there.

When I grow up I aspire to be a Stig. I reckon I could do the drifting ghost bit quite well if I put my mind to it.

Rod Laver and Me

I called Tennis Australia in the middle of the Australian Open today thinking "what else have they got to focus on but my search for a long lost relative?"

They took my call. I spoke to a young woman with whom I felt compelled to share my story. "Martin Mulligan, long lost relative. Maybe the last in his line. Lost the Wimbledon Open to Rod Laver in 1962 ( I needed to make the tennis connection quickly). I'm doing some family research" I could hear the wheels turning, her thinking "You're calling Tennis Australia with a family history enquiry?"

Clearly she was well trained in customer relations and rather than hang up on me or remind me that there were hundreds of elite tennis athletes playing for their lives on scorching hot tennis courts all needing her help, she said; "I'll make some enquiries and get someone to call you back." I was pretty sure I would never again hear from TA.

But they have called back - twice.
In the first call, I gave a more succinct version of my life story and asked if they had a listing of a contact for Martin. They promised to check and call back. Which they did, within 15 minutes.
"Sorry but we don't have a contact. He lives in San Francisco I believe." I pressed for more but that's the best they could offer. Christ, how many Martin Mulligans would there be in San Fran!

I decided to push my luck.
"Does Rod Laver live in San Francisco?" I asked. "No" they replied, "I understand he divides his time between Australia and California."  the voice at the end of the Tennis Australia line continued. Isn't San Francisco in California I thought, making a mental note to check my geography on Google Earth.
"Do you think you could get a message to Rod asking him if he is still in contact with Martin?" I asked, or more truthfully suggested, expecting a pretty direct no to a pretty cheeky question. There was a pause....

"I could try and get a message to him."  he said.
"That'd be great" I said. "Should I follow that up with you later?" "No. I'll endeavour to get that message to him for you and we'll see where that takes us."
"Tell him it's about family" I said as I signed off. "I'll leave it in your hands."

I fully expect a call from Rod Laver Arena in the midst of some climactic moment in the mens semi-final from the man himself with news of Martin. I'm sure they email each other daily reliving that great battle of 1962.

Oh BTW if you were watching the 7:30 report last night on ABC TV, I appeared fleetingly in the segment on the Griffith (Kevin Rudd) by-election. That was filmed unbeknown to me. It was asimilar experience to my being featured on a commercial news report last year where I was asked in a street interview about some topic I knew little about but had an opinion on anyway - I think it was the use of speed cameras as a revenue raising tool.

Andrea suggests that I'm some kind of media tart - but they chase me not vice-versa. I think I'm just one of the stupid ones who pauses long enough to get caught on film. I'm sure my media profile will make all the difference in getting a response from Rod.
Posted by little hat at 14:44 No comments: