Capelin Lynch 2016
Greetings all.
We’ve had another fulfilling and busy year.
Here’s a few memorable moments .

Family moments
Steve                    Going to the AFL with Jess and preferring to chat than watch the dismal performances.
Golf with Nick. Watching him hit like a baseball player and somehow have a card with a score half mine. Not envious!
Andrea                                 Playing with Nick and Dim’s new dog Abbie; getting to know my brother Dave again when he stayed for a couple of months to perform at QTC.

Good Friends    Being lucky to have a circle of long term friends with whom we share meals, laughs, stories, holidays, weekends away, good and hard times. Let’s grow old together.

Holidays
Steve    PNG with MIck and friend Gabrielle. Where to start? Stepping on to New Ireland where my great grandparents landed in 1880. Pinching a 150 year old brick each as souvenirs. Finding Mt Hagen clothed in razor wire on the one hand and being adopted by locals on the other. Memorable.
Spending time with cousins Rita and Vince in Kalamunda, Perth as part of our WA trip. Freezing in our hired campervan as we experienced the coldest October in the west in 30 years.
Andrea                   Palm Cove and Cairns in July for a “girls holiday” with Mally and Lindy. The Indigenous Art Fair was  wonderful.
WA in Oct- seeing the amazing variety of wildflowers in WA and being shown around Fremantle by a knowledgeable local, Margo O’Byrne. Meeting Sarah Drummond author of “The Sound” at Broke Inlet was another highlight. 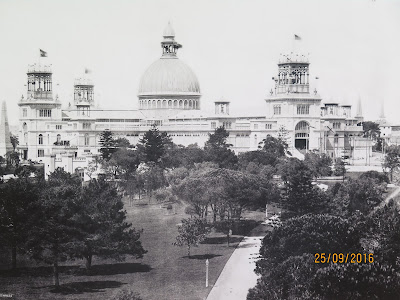 This was the house next door. On arrival in 1881 the 250 Italians escaping from the disastrous attempt to establish a colony in PNG were housed in a hall in the Domain, Sydney. This hall (Agricultural Hall) was fifty metres away from this amazing building. It was the Garden Palace built to house the 1879 Sydney International Expo. It burnt down in 1882. The Agricultural Hall then became the collection point for all things technical and historic and was the precursor to the Sydney Powerhouse Museum.

Andrea     Still exploring the living relatives so not yet up to the dead ones.

Books.
Steve                    Rereading David Malouf’s  “12 Edmonstone Street.” Realised it was actually about the notion of memory and family rather than a simple memoir.  Inspired me to write about my mother and her collection of wildflowers from 1946. http://mymissinglife.blogspot.com.au/2016/11/wildflower-dreams-seventy-year-story.html
Andrea                 Discovering Randolph Stow (“The Merry-Go-Round in the Sea”), a Western Australian writer whom Tim Winton credits as his inspiration. Loved reading “The Sound” (Sarah Drummond) set in WA.


Music
Steve                    Gareth Liddiard (The Drones) acoustic version of TAMAN SHUD at Mullum Music Festival
“Thud thud my heart pumps blood
Whenever someone talks about my Taman Shud
Who ditched that fox-gloved snitch?
Loaded him with poison like a puffer fish”
You had to be there. And I was.
Andrea                                 Happening on the local ukulele club playing “Hallelujah” in a nearby café on the night that Leonard Cohen died.

Lets get physical
Steve                    Kept swimming. Took up pilates. Played a weekly round of golf with mates Denis and Nev. Outcome: everything between despair and elation. More of the former. We’re improving. Indicator: less cursing.
Andrea                                 Continuing to go to aqua aerobics and deep water running where the jaw and tongue get a good workout as the women share their lives.

Moments of sadness
Andrea’s Uncle Kent – an elder and missed
Steve Gahan – eldest cousin on my father’s side. A much loved bloke. Missed.
Death of Derek Ives – so talented, so young.
RIP Patch (1994-2016). Buried under a pile of wood in the backyard.

With 2017 beckoning we wish you a peaceful Xmas break and everything you hope for next year.
Love Andrea and Steve
Posted by little hat at 12:10 1 comment:

Big Bang to the Coffee Explosion - a billion year history 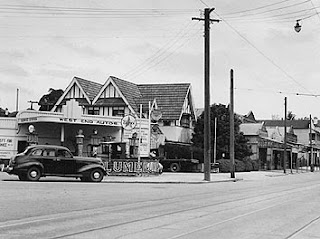 I wrote this last month to be read at an event at our local bookshop celebrating the history of our local 'high' street. I've been doing a lot of research with my colleagues - the West End Making History Group.


It’s still up there


For billions of years


A boat on a sea of magma


This whitefella and a mate


‘Good place for a Penal Colony,’ he thinks


Regarded only as a place for crops to grow


And so begins the resistance


‘We are not to be toyed with’


And the Spirit of West End begins to flow.


What does this Oxley find?


To ridges falling from a high hill behind


This gully, dry - but when it floods


The boundaries of this Brisbane Town


So Boundary becomes an exclusion zone


No blacks inside these lines at night


On Sundays no bullroarer dance.


The times are good


The boom’s upon us


Homes spring up to fill the gaps.


A general store and then Shay’s Shoes.


But Boundary is at the centre

A Picture Palace, A School of Arts


All this and more


Before the death of the corner store


And birth instead of another sound 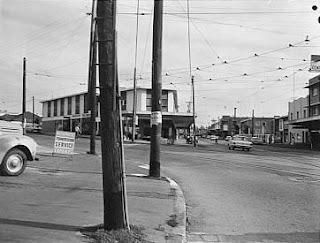 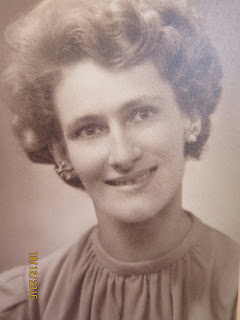 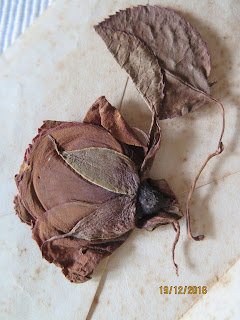 You might remember I wrote recently about my mother and her copy of 'The Complete Works of William Shakespeare'. I was talking about her hidden life and her love of literature.
Her well thumbed copy includes all his plays and his sonnets and a few other surprises.
As I opened the cover of this 1312 page tome the first thing that fell out was a fading paper, brown and ragged at the edges, containing a 'Lamington' recipe. Unusual place for a recipe I thought.
Further on was a set of newspaper clippings - all poems of a spiritual or "bring home the diggers safely" mode - evidence of her devout Catholic upbringing. And then, there, a few pages on, was an envelope, speckled with brown stains like a chickens egg containing a rose pressed and wrapped in tissue, perfectly preserved. Suddenly my mother was with me again. She, along with many women of her generation, had a real love of their rose bushes. The rich cocoa brown of the petals are velvety, almost edible.
Finally, further into the plays, around Richard III, was the piece de resistance. A poem she'd written giving an account of a disastrous holiday she and her girlfriends had taken, written in sonnet form. This was the mid 1940s; she's about 26/27; the war has just ended; she hasn't yet met my father (as far as I can tell). It's so faded it has almost disappeared. I had to use a magnifying glass to deciper it.


Eileen Hill's Poem in the style of a Shakesperaean sonnet.

Dear friends our tale will now begin
Of how we spent our leave
Of mud and flood and more be-gud
You'll hear and with me grieve.

We left the town one Saturday
Our joyful hopes were mounting
We little thought those clear blue skies
Would soon spurt like a fountain.

We hauled our three selves in the bus
And sallied to our cottage
To find too soon ourselves marooned
With nought but mess of pottage.

Our first night brought a cyclone in
The house supports were quivering
And underneath our scanty shorts
Our own pins set up shivering.

When dawn broke with a watery smile
We thought twould change our courses
When o'er verandah rail we spied
The heads of eight great horses.

We stamped and yelled to scare them off
They snorted but the harder
We must explain our cruel shame
They cut us off from larder.

On fifth day when our hopes were sunk
All chance of suntan gone
O'er garden gate at three twenty eight
Our first faint sunbeam shone.

We danced about in great delight
The air filled with our cackle
We even thought at that late hour
The slimy brine to tackle.

Three full days of sun we had
Of surf and swim and beach
But now alas has come to pass
More rain -- I've lost my speech.

A thunder storm we thought at first
And tried to spy blue patches
But storms don't last for days on end
While mushroom round us hatches. 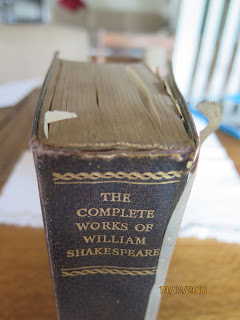 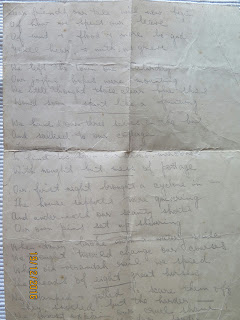 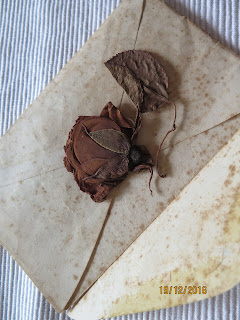