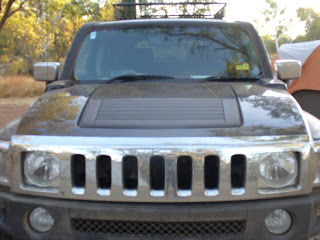 I’ve not often been the object of envy.

I have experienced envy on the other hand. In my case this is usually triggered by the twin themes of wealth and talent: the owners of impossibly expensive houses perched on headlands overlooking rolling surf and secluded beaches; international travellers who journey to exotic destinations without a second thought; artists who are gifted beyond what seems fair, who toss off inspired canvasses one after the other while the pathetic remnants of my many art classes languish in bottom drawers of dusty cupboards; and gifted athletes who are invariably endowed with both exceptional skill and exceptional good looks.

I am not an unhappy man. I understand my limitations. I have an acceptance of my lot. An ability to celebrate the moderate gifts I possess.

Hummer envy, the deep desire of others to have what I had, took me by surprise.

Four of us, two couples, were about to set out on our long planned journey across the remote north west of Australia. The Kimberley.

We had arranged to hire a 4WD to be picked up in Broome on our arrival. We had booked it five months in advance. On arrival we were surprised to find our booking had taken an unexpected turn. We were presented with a big ugly 4WD. A Hummer. Our initial response was one of scorn and embarrassment. Myself and my three travelling companions experienced a serious case of Hummer rage.

We had expected a simple Toyota Land Cruiser. A white or cream one, complete with double fuel tank, bull bars, a few dings and a tent on top. Instead we stood before a large black bull of a car, the sun glinting off the perfect polished duco. Instead of a bull bar it sported a shiny metal grill, silver teeth bared. There was no auxiliary fuel tank, no tent on top and no dents. It was an immaculate Middle American dream.

Every aspect of the design was square. It was full of right angles as if a curve might be too girlie for this beast. The windows were small, the wheels oversized and every window, bar the windscreen, was tinted an impenetrable smoky black.

This was our vehicle for three weeks. 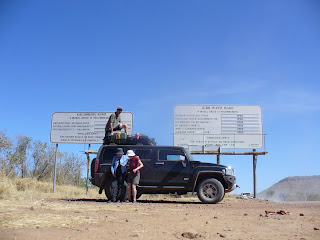 Back home my wife and I shared a four cylinder Mazda and our companions were proud drivers of an old 90’s Commodore. We’d never driven a 4WD, never seen a Hummer.

Our first instinct was to hide. We feared people would laugh at us. We had images of being ostracised in camping grounds, of being the topic of whispered conversations. Our Hummer distress was palpable.

It drove well. The girls in the back remarked on the comfort of the seats, unexpected in a 4WD. They’d been expecting a plank of wood covered in foam, not contoured seats with lumbar support.

When we drove into the Aboriginal community at One Arm Point at the northern most point of the Dampier Peninsular we felt like aliens. The streets were largely deserted. In the hot afternoon dogs slept in the shade of dusty trees. The occasional local emerged from the store with an ice cream. Silver corrugated iron and ochre backyards greeted us as we glided silently into town.

Inside the Hummer, behind wound up dust proof windows, each of us wore dark sunglasses. We peered out like hit-men from the Mob or a team of FBI Agents travelling incognito. Invisible behind our tinted windows.

We had aspirations. We were intent on making contact with some local Aboriginal communities. We had delusions of self importance.

We knew that the first rule of community work was ‘maintain a low profile’. ‘Listen’. The second rule we knew was: ‘do not arrive in a large shiny black American 4WD looking like characters from Ghostbusters’ We couldn’t exactly hide this monster. We were snookered.

Resigned to our fate we purchased a $40 fuel card from the store and motored across the road to the gas station. The two boys jumped down from the Hummer running board (it took two of us to complete most Hummer activities – one to open the fuel tank, one to operate the pump; one to drive, one to read the manual). 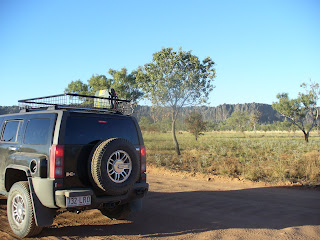 The gas station could have been out of a scene from a John Wayne movie. Everything was rusty or rust coloured. Every surface had taken a beating. Our brilliant black limo stood out like proverbial dogs balls. The bloody thing was so shiny it seemed to repel dirt and dust. We couldn’t even claim off-road cred. Heads down we went about our business.

‘How long you had that Hummer?’

A young bloke filling his battered Toyota Hilux on the other side of the bowser was talking to us.

‘My son wants me to buy im one of those’ said a second black voice as he emerged from the mechanics shed. ‘He seen em on TV’

‘How much that Hummer cost you?’ said the first.

I made up a figure.

I discovered later that he was pretty spot on.

The Hummer was working its own miracle. We’d suddenly gone from aliens to celebrities. The Hummer had suddenly become our ally. A point of connection at petrol bowsers. At the rate the Hummer was chewing up petrol it’d have quite a few opportunities in the next 3000 kilometres to work its magic. Things were looking up.

Back at the camp-site however, things were a bit different.
Posted by little hat at 20:15 1 comment: 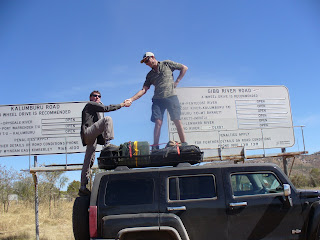 via Kunnunurra and the Gibb River Road.

For those not familiar with that part of the world we're talking about the remote north west of Australia between the Northern Territory border and the pearl coastline of the Dampier Peninsular.
The Broome area has a long history of many cultures working within the pearling industry. Japanese, English, Indonesian and Indigenous communities all worked side by side, not always harmoniously.


Gibb River Road (Denis and I and the Hummer) 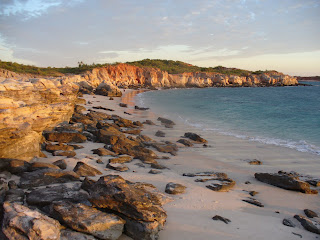 We spent 3 days at Cape Leveque, 200 Km north of Broome (about which there is a story coming featuring camping disasters, long distance phonecalls and enforced sleeping under the stars) before returning to Broome for our big trek along the Gibb River Road and back.

The Gibb River Road is 600 kms of dirt road though stony spinifex plains interrupted by occasional ranges and massive river systems, most of which are dry at this time of year. We took the challenge in our rented Hummer - another story in the pipeline. 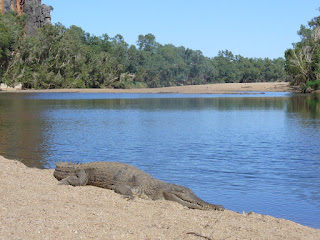 Four of us on a 21 day epic of camping, dust, stunning gorges and swimming holes (Manning River story to come), indigenous communities, did I mention red dust, vast landscapes, inspiring optimism and hundreds of fellow 4WD adventurers - and lots of exciting indigenous art pieces, two of which came home with us.

I could give a running commentary in retrospect? On second thoughts maybe just the three main stories and some commentary on some great photos (if i do say myself).

And so back to work. Yawn.

Wandjina Gorge (and freshwater friend)
Posted by little hat at 18:53 No comments: