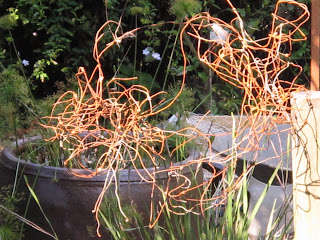 Can a found object be a piece of art? I found this tangle of wire on a friend's farm recently. It looked like ready made art to me, so I attached it to a post (plinth?) and let it work its magic on me. At about 3:30pm each day the sun from the west changes it from a dull knot of rusty wire into a lustrous light catcher. It gives me pleasure and it has some of the qualities of an art piece except it was not made consciously. Da Da!
Posted by little hat at 21:34 8 comments:

Bought myself a new camera. I wanted something small enough to carry in my pocket but something whcin gives me the option of full manual control. I'm happy with my Canon G12. Unfortunately it hasn't turned me into an instant Cartier Bressan or Eliot Ewitt. I've got a lot to learn. Still it does things my former Panasonic could never do. I can set a wide aperture for narrow depth of field and take shots in low light.

It rained this weekend after an extended dry spell here. It was a wonderful to hear the sound of rain on a tin roof after such a long time. The photo of andrea was taken in Melbourne two weeks ago. The green shots were taken at my brother's weekender at Boreen Point on Lake Catharaba north of Brisbane.

BrushTurkey put to good use

It's summer. The brush turkeys are on the prowl. Breeding profusely and tearing gardens to shreds to make their huge nests.

This is the only good use I have found for these terrorists, though my Uncle Paddy says if you get them young they cook up quite well. Others say that to cook them, boil in water with a rock and they're ready to eat when the rock is tender. Unfortunately they're a protected species.

I've always wanted a wind vane, a weather cock. I love their simplicity and in a strange way I always feel connected with the elements when I watch them.

I've hinted to the family about my secret desire over the years but my requests for a birthday or christmas surprise have always been deemed to be a tad eccentric and fallen on deaf ears.

I've taken matters into my own hands and decided to make one of my own. Google helped, but of even more assistance was the natural qualities of the brush turkey. What a great tail. If only their heads were anywhere near as attractive! They're pin heads of very little brain and spend many hours with their heads stuck in the mound of nest material taking the temperature. Hence functional but ugly.

So I googled and then had a sudden inspiration. After ten years I have designed and made a prototype over the past couple of days. And it works. It behaves just like a turkey - spinning and checking and changing direction in response to the breeze.More rational than the real bird.

I've just read Lily Brett's Lola Bensky. It was a mixed read for me. It was my first foray into Lily Brett and only triggered by my membership of my Australian Bookclub.

The novel centres around a young Australian music journalist who travels to London and New York in the 60s to interview the rock stars for her Australian magazine. She's very young, quite innocent and ends up backstage with the most amazing array of iconic characters. It verges on unbelievable.

The conversations she has are often about herself and her family and their holocaust experience. At times it felt a bit twee to find her with yet another star innocently musing on her weight (another theme) and her life. I felt engaged with the Jewishness of the Bensky character but her drive-by relationship with the musicians of the 60s didn't quite work for me. I guess Lola's (Jewish) tendency to constantly ask questions and become absorbed in her own life , triggered by her conversations was the intent but it became a bit predictable and indulgent for me. Jimi Hendrix is portrayed as a sweetie, Jagger as intelligent and insightful and Jim Morrison as an arsehole. Mind you, I did find myself singing many of the tunes of the 60s which she dropped into the text along the way. Am I just nostalgic, or was that an era of exceptional pop music? Beatles, Rolling Stones, Jimi Hendrix, Mamas and Pappas, Sonny and Cher, Canned Heat, the Doors etc etc to name just a few that appear on the pages. 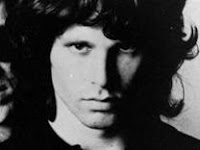 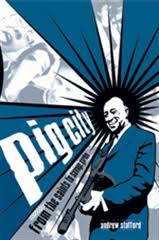 As it happened I was finishing reading "Pig City" by Andrew Stafford at the same time (a factual account of the politics and music of Brisbane in the 70s, 80s and 90s). Stafford is not Brisbane born and was a kid when all this happened so, I suspect. he's not setting out to create some new mythology. His account explains the phenomena of creativity thriving under adversity. The era was characterised by political oppression and an attempt to smash the counter culture and suppress dissent. The pig in the title is a slang reference to the police and the 'police state' of the time.I was excited by the dash and daring of the Brisbane bands of the era even though I seemed to have missed many of them (Saints, Gangajang, Tex Perkins, and my favourite band name - Pineapples from the Dawn of Time). I was a late convert to the Go Betweens even though I was at Uni with their drummer Lindy Morrison. My turn to drop names. Stafford finishes with Powderfinger in full flight.
Posted by little hat at 07:34 No comments: