I was doing my Wednesday morning laps at the local pool yesterday and intercepted a conversation taking place between two young women swimming in the lanes on either side of me.

One was the  daughter of Alan who has the lease on Musgrave Park Pool. Alan has been managing the pool for quite a few years. He swims every day and puts me to shame, both as a swimmer and in general fitness terms. Turns out Alan is 70. I would have guessed maybe early 60s. But I digress.

"Was your father a top swimmer?" asked lane 1.
"Yeah, he was a state champion in his day" replied lane 3. "He should have gone to the '64 Olympics. He was dudded by the Australian selectors. He won the national breast-stroke championship but the selectors took the guy who came second and left dad behind." Do children embellish the memories of their fathers I wondered? Or maybe just make things up?

Alan swims well, but at 70 he's no lomger a contender. And come to think of it I don't think I've ever seen Alan doing breast-stroke.

As I left the pool I asked Alan about the story. "Yeah, it's true. I missed out on the Olympics. I came second in the national championships and the selectors took the first and third placegetters." "What was that about?" I asked him. "Dunno really. They thought he would be more likely to perform and be a medal chance than me apparently." I detected a hint of unresolved anger still lingering these 50 years later.

"You must have been a contemporary of Murray Rose?" I added. "Yeah. He was a strange bloke. Kept to himself and didn't really make himself part of the team. He was from a wealthy family, went to a private school." I had recently seen a documentary on Rose. He was a vegetarian, pretty unusual in 1963. Clearly an educated man. "He was very strict. He wouldn't even step inside a butcher's shop when we went shopping for supplies. It wasn't just about health. It was a philosophy."

Rose missed out on selection for the 1964 Olympics because he refused to return from the USA where he was in the middle of filming a B Grade surf movie - Ride the Wild Surf. He fancied himself as an actor. "He did some awful movies." observed Alan.

"The bloke who beat me went on to win the 200m event at the Olympics in world record time." Alan was making a subtle point about the quality of the competition. He had finished second behind the next World Record holder.

His name was Ian O'Brien.

Only Murray became a household name - understandably so, as he won three gold medals at the Melbourne Olympics and again won Gold in 1960 in Rome. At one time he held the world records in the 400m, 800m, and 1500-metre freestyle.

Still, for me, Musgrave Park Pool, probably the most neglected pool in the city, has gained some gravitas.
Posted by little hat at 10:26 1 comment: 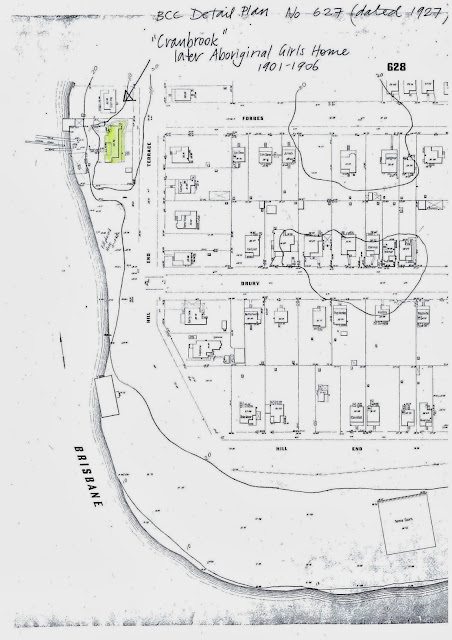 This is the story of making the invisible become visible.

On the bend of the Brisbane River where the St Lucia Reach and Milton Reach meet, a set of stone steps leads from the river bank to a vacant piece of land high above the river.

This was once the site of "Cranbrook", a large Queensland colonial home built in 1885. Waterfront property in the Hill End area of South Brisbane was prime real estate in the late 19th Century. The 1893 flood washed many of the riverfront properties away but Cranbrook survived. It was high enough to escape the worst of the raging torrent.

Perhaps the stock market crash of  the1890s played a part in the next phase of its life for, in 1899, it was purchased by the Qld State Government and converted into an Aboriginal Girls Home where it received girls from across the southern part of the state. These young girls would, for the most part, become domestics in well to do homes of Brisbane's white families. The demand for these girls was high.

The first matron of the home was Frances Meston. She was also Queensland's first Protector of Aboriginal Girls, a position established by the state government when it legislated the "Protection of Aboriginals and Control of the Supply of Opium Act" in 1897. (Full title: An Act to make Provision for the Better Protection and Care of the Aboriginal and Half-Caste Inhabitants of the Colony, and to make more Effectual Provision for Restricting the Sale and Distribution of Opium)

Frances' husband, Archibald Meston, who had advised on the drafting of the Act, was appointed the first Protector of Aboriginals in South Queensland. Popular history has been inclined to deal harshly with Archibald and also Frances, but research reveals that this might not be wholly warranted in that they were well intentioned rather than malicious. Interestingly Frances was in her position for only one year and Archibald for five years.

The matron who succeeded Frances was not at all well intentioned, as the home was shut down in 1906 after numerous complaints regarding its management. "The Act", as it was referred to, resettled large numbers of Aboriginal families on reserves where a permit system operated restricting movement into and out of these reserves. Initially this was used as a way of separating unproductive, ill and 'problematic' Aboriginal people from those working in European industries. Later it was used to create labour pools for white industry and to make those regarded as half-caste, wards of the state to limit the reproduction of part-Aboriginal offspring – the so-called 'half-caste menace' – seen at the time as a threat to an ideal 'White Australia'. The Aboriginal people were under the total control of government officers, missionaries and police.

To my surprise I discovered that this knoll, on the bend in the Brisbane River, in the midst of the Hill End community, was designated a "Reserve" under "The Act" from 1904-1906 to allow the home to operate and the permit system to be enforced.

"The Act" was amended multiple times and additional acts passed varying this regime but it was not until the Commonwealth stepped in and passed the "Aboriginal and Torres Strait Islander (Queensland Reserves and Communities Self-Management) Act" in 1978 that the reserve system came to an end.
.
Posted by little hat at 11:27 1 comment: 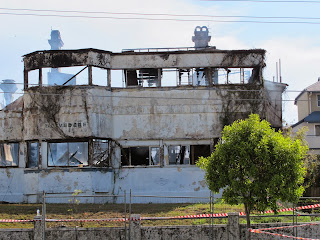 Writer David Malouf is perhaps better known than the old mansion, the Belvedere, though the Belvedere (originally named Bandarra) had been in existence for almost 100 years before Malouf wrote his personal account of West End in his 1985 memoir "12 Edmondstone Street".

In his memoir he described his life as the son of Lebanese parents living in Edmondstone Street in the 1940s and 50s. His family home near the corner of Melbourne Street no longer exists. It has been a small business site since the 60s and is about to be redeveloped as an apartment block. 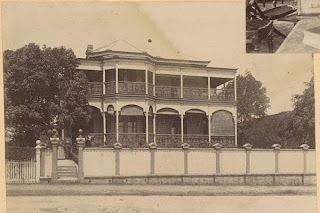 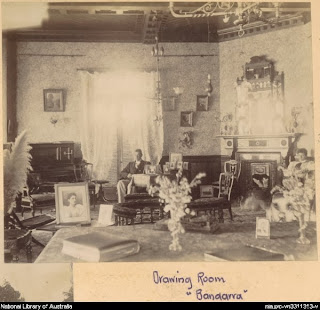 He described Edmonstone Street as "the most fashionable area south of the river". He was talking about the 1880s before the global financial downturn of the 1890s and the great flood of 1893 when the Brisbane River peaked three times in one month.

Built in 1888, the Belvedere was a product of this time of prosperity. It survived the flood which inundated Musgrave Park opposite; it also survived conversion to flats in the 1930s which was the fate of many old mansions of that era.

It fell into neglect in the latter part of the 20th Century and, while other buildings were lovingly restored as West End again became an attractive area for investors and cashed up families, the Belvedere continued to sit idle and empty save for a moving population of squatters. The surrounding workers cottages of West End continued to house Greek families, artists and salaried families.

My Greek barber tells me that the Greek Club purchased the Belvedere about thirty years ago so they hold some responsibility for its slow decay. Their vision for the site was in response to their need for space for expansion and parking. Their application to demolish the decaying mansion led to a protracted battle with the Brisbane City Council which the BCC won insisting on the retention of the Belvedere as a heritage listed building. This was finally resolved in recent months and the Creek Club agreed to restore the home to its former glory.

From reports of those who had been inside, the interior was largely intact. Rare Queensland timbers which had never been painted were evident in the staircases, fireplaces, walls and floring. From the outside it was a heap of junk but inside it still retained the diamond at its core.

On Tuesday 12 November at 6am a fire broke out on its upper level and within an hour only a shell remained. By sunset there was only a pile of rubble.

Police are investigating.
Posted by little hat at 10:05 No comments: