Who is Allesandro del Piero 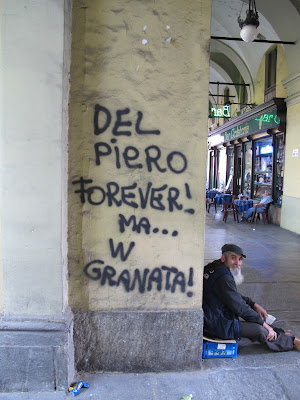 Indeed. apparently he is a GOD in Italy. Something about the world cup. He was born in Cornegliano in the Veneto where some of my ancestors had connections. We are almost related. The young girls on the information desk at Treviso (the provincial capital) couldn't believe I'd never heard of him. especially now he lives and plays football in Sydney.

I hope he's not going to follow in George Best and Diego Maradona's footsteps.

Allesandro del Piero.
Born in Conegliano, Veneto, Del Piero is the son of Gino, an electrician, and Bruna, a housekeeper.[16] He regularly played football in the backyard with two friends, Nelso and Pierpaolo, as a child. All three dreamed of becoming footballers, but only Del Piero would eventually manage to do so.[17] Alessandro's older brother, Stefano, briefly played professional football for Sampdoria before an injury curtailed his career. The family lived in the hamlet of Saccon, a rural home in San Vendemiano. While growing up, Del Piero's family did not have much money for travelling abroad, so he considered being a lorry driver in order to see the world.

'While playing for the local youth team of San Vendemiano,[18] Del Piero used to feature as a goalkeeper because he could play a lot more football that way. His mother thought it would be better for him if he played as a goalkeeper since he would not sweat and the possibility of him getting injured was less likely. His brother Stefano commented to their mother that Alessandro looked better playing in an attacking position and Del Piero switched.[19]'