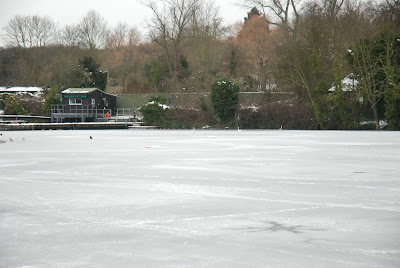 I wrote a story in 2008 about my strange experiences at the Men's Only Bathing Pond on Hamstead Heath in London (Beware of Breeding Swans - 27 Oct 2008). That was July. The sun shone in an Australian way, hot and direct. Still the water was chilly by my mid-summer standards.
Today I received a photo of that same pond (taken on the 10 January) from my sister-in-law Fang who who lives nearby. She told me that the locals were still swimming there, using ice picks to gain entry. A friend, a visiting first timer as I was in 2008, ventured out with towl and trowl to partake of this strange ritual. It was so cold his feet stuck to the ice on the platform leading to the water. He could go no further.
He who hesitates is lost. 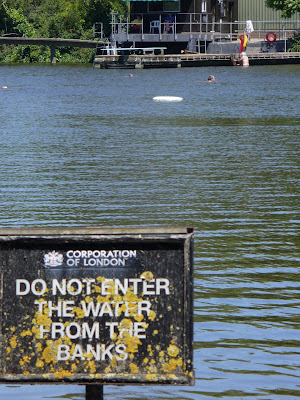 Yesterday I saw loads of photos of people from around the world all doing the New Years Day swim, all of them without exception having to swim amongst ice. What brave souls. Paddling through the mud with my boots on is enough for me!