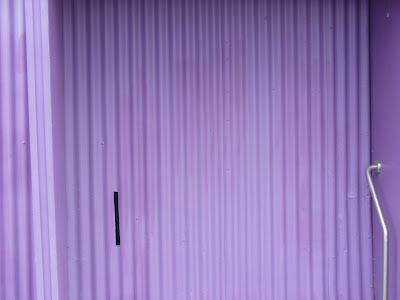 Corrugated iron - study in mauve. No, it's not an adult shop. It's for lease. Prime location. Recently painted.

Let's face it Caloundra is daggy. It's full of overweight working class people (or people like us attempting to reclaim their working class roots), generally ugly apartment developments and a main street from the fifties. We love it.

And Caloundra loves colour. Seems like the concept is that if you use enough bright and mediterranean colour schemes it will prove how vibrant and 'now' this beachfront family destination is. Noosa it is not. Thank heavens!

Its cuisine matches its daggy reputation. It has a restaurant owned by the former Australian Rugby League captain Alfie Langer. Alfie was an Ipswich boy. Enough said.

We ate at an Indian restaurant which proclaimed itself as 'voted the best Indian food in Queensland'. Voted by the proprieters I suspect. We couldn't taste the difference between the Prawn Vindaloo and the Mattar Paneer (homemade goats cheese and pea).

And in the main street the 'Love Figure Gourmet House' Chinese Restaurant. 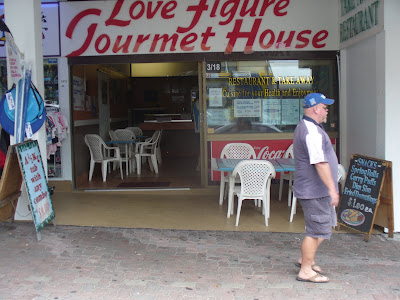 Love figure? Go figure. Oh well. It does have the most spectacular board walk on the coast. C-C-Caloundra.

Love the colour of that purple paint, and looks like it has been painted without a single drip! And what an odd name for a chinese food shop, but could put up with that place being shipped over to France - there is a notably absence of fast foody places here, in particular, the chinese ones!

Ah yes I know that area well. But Noosa. I was in Hastings Street last week and haven't been there for years. It's lost something. Was all Surfers Paradise to me. Sigh. Love today's pic.