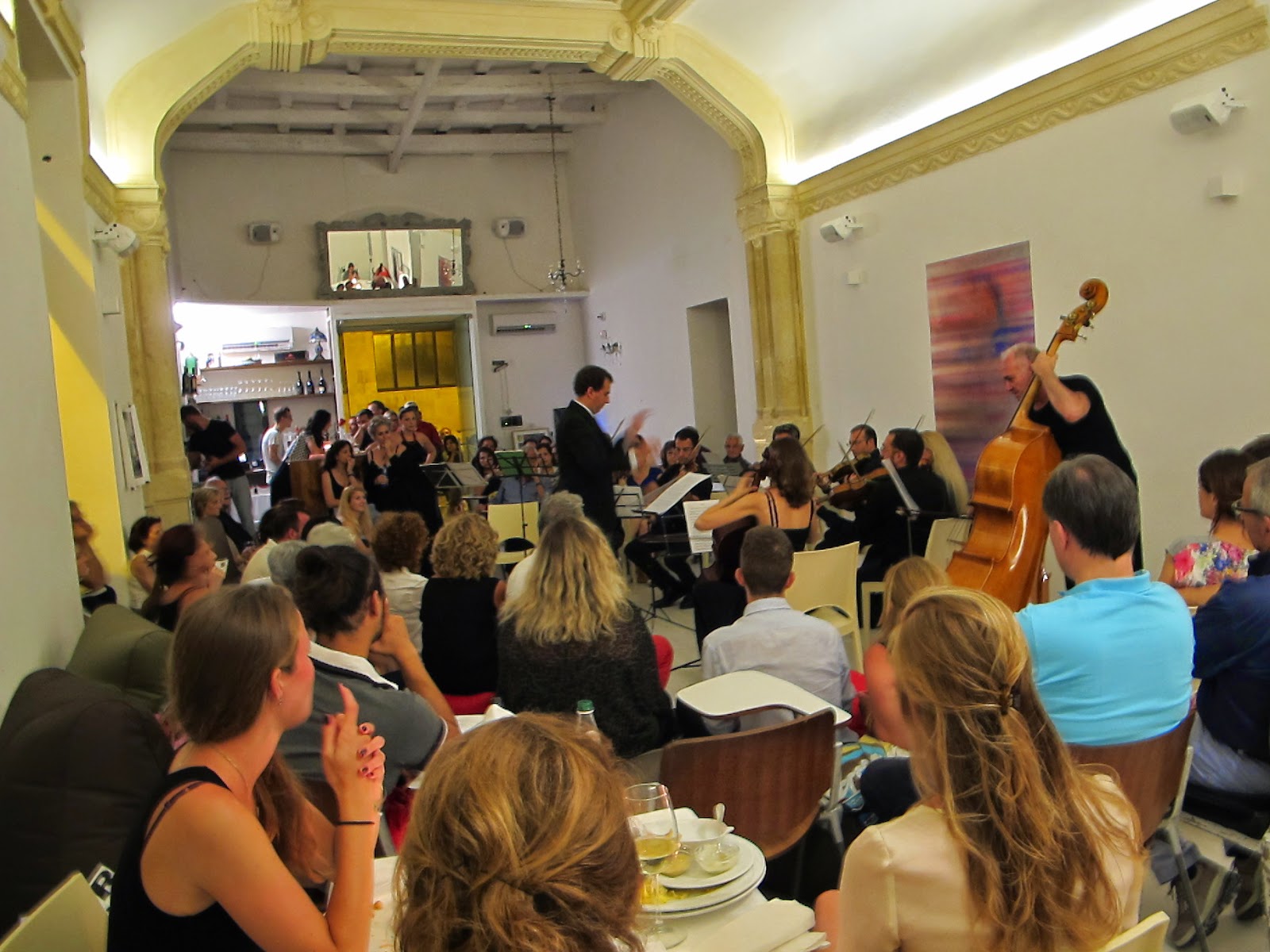 We were on our way back from the Ortigia supermarket (there is only one) with supplies for dinner (chicken, a few salad vegetables, buffolo mozarella - so smooth). We had booked an apartment close by the water with a full kitchen. We cook for ourselves when we can. It saves a lot of money (almost pays for the apartment) and we cook local ingredients with ( and I am trying to sound humble) some success - Andrea's spaghetti vognole (clams) was every bit as good as the local version.

Anyway, as we walked down the Via Roma on this island at the tip of Syracusa, the original Greek settlement of Syracusa, we were distracted by the sound of an orchestra. I say distracted because Via Roma itself is mesmerising. The narrow street is lined with charming three story limestone buildings, every balcony a wrought iron work of art and many bedecked with bougainvillia. An orchestra was not something we expected at five oclock in the afternoon when the rest of Sicily was asleep.

A tall woman, long dark hair falling across her shoulders informed us that there was a concert in the restaurant that evening, a chamber orchestra and singers.We paused and Barbara (as I later learnt her to be) told us it was E20 a head which included food - a generous tasting dish per person. We looked at each other and at our two large food laden bags, realised we hadn't had a chance to properly celebrate Andrea's birthday of the previous Monday and booked a table.

Now this is a story not only of music and food but of dangerous choices and bravery.

We arrived at 8:30 to a packed restaurant and were treated to a performance which I, in my ignorance, simply took to be a 'best of' selection of classical vocal pieces but which I later learnt was a full performance of a thirteenth century hymn - Sabat Mater (a meditation on the Virgin Mary) by eighteenth century composer Pergolesi (for those of you who know your music). It was sublime. The acoustics were perfect, the soprano and contralto's voices soared and plunged and filled the room with prayer (and as you know I am not a prayerful person).

Barbara was there in charge. It was, after all, her restaurant. Also there was a young English girl who heard our accents and introduced herself at the door as we entered. She too was arriving - to work in the kitchen. 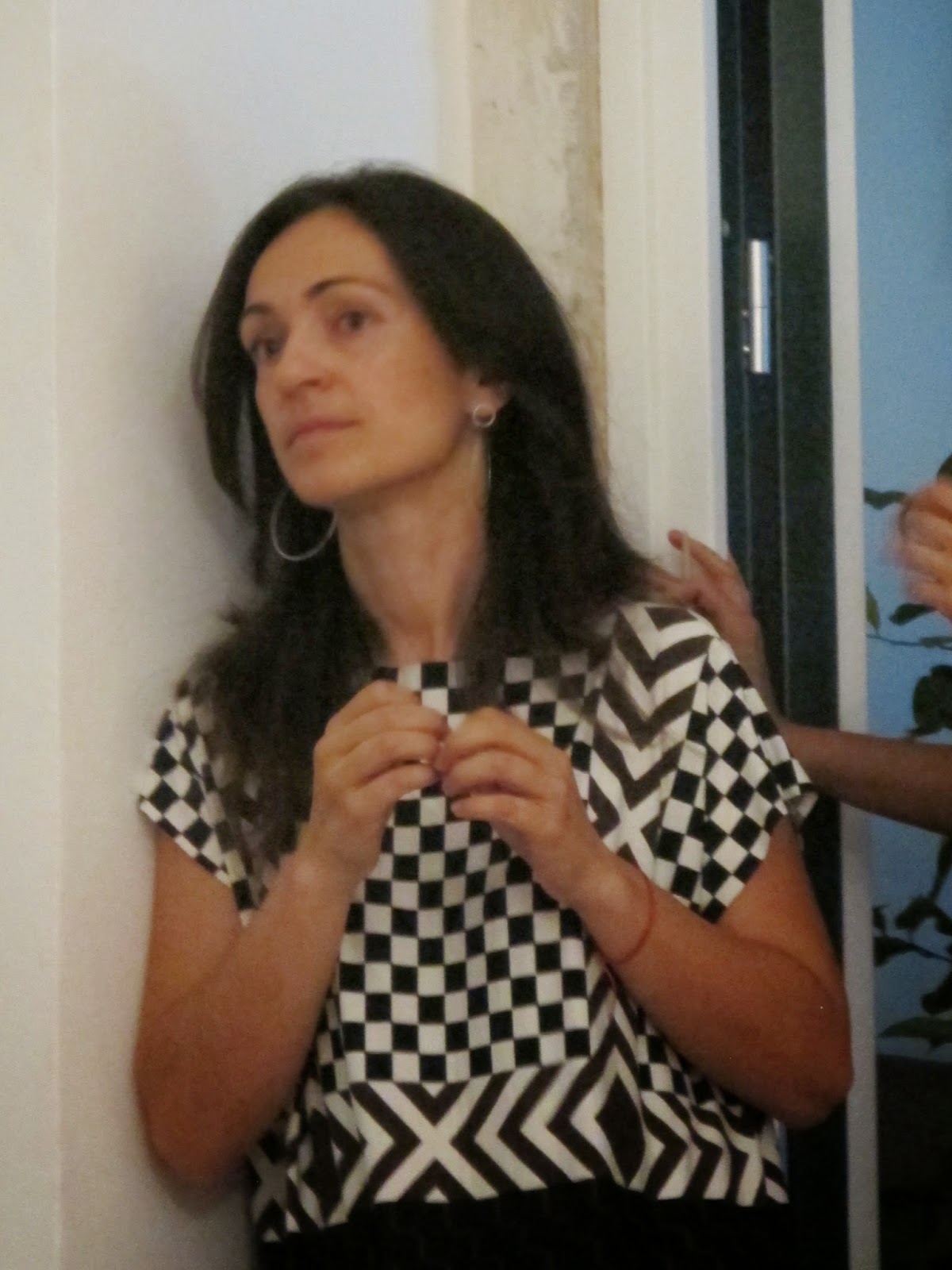 Where's the bravery you might be thinking. Well Barbara and her husband had only recently opened this venue as a vegetarian restaurant in seafood and pizza and cured meat mad Sicily. Francesco, her husband, is from Salerno on the mainland and she is a northerner from Bologna. They are attempting two difficult challenges - first the vegetarian menu and second, establishing a viable quality local music venue on this tiny island outpost where the most often heard music is the accordion of the gypsies wandering the streets and bars seking tips.

As I said the place was packed and that after only two months of operation. MOON, as they have named it, has a clever acronym as a tag line - Move Ortigia Out of Normality - but I think that a moon, a new moon, any moon, is evocative of romance and beginnings and reaching for the stars and doesn't need any assistance. Barbara swept from table to kitchen to bar ensuring everything ran smoothly. I have a photo of her in a moment of pause late in the evening leaning against the portico leading into the garden calmly observing the soprano and contralto in full flight, her tall frame and dark eyes accentuated by a long black silken shift with a dramatic black and white top that flowed with the music.

The English girl was in the kitchen all night. Our only contact had been the brief exchange on arrival. At this stage she was just a young vibrant traveler holed up in a vegetarian restaurant in a place far distant from home.

It was two nights later that she gained a name. Andrea had gone to bed early to read. She is half way through Robert Dessaix''s 'Night Letters', a lovely piece of writing in the form of a series of letters from an Australian to a friend back home written from Venice and Padua. I, meanwhile, wandered back to MOON looking for more music. There had been a young ukelele player the previous night and this night Dario Chillemi, a Sicilian (Catania born) guitar virtuoso, based in Berlin, was performing. Sadly only about a dozen people were there to share his mix of classical, traditional and contemporary pieces all delivered with intensity and wit.. He told us a little of his life, of his campervan in Berlin which needed a new gearbox - not a plea for sympathy, more a way of helping us understand the life of the itinerant musician. 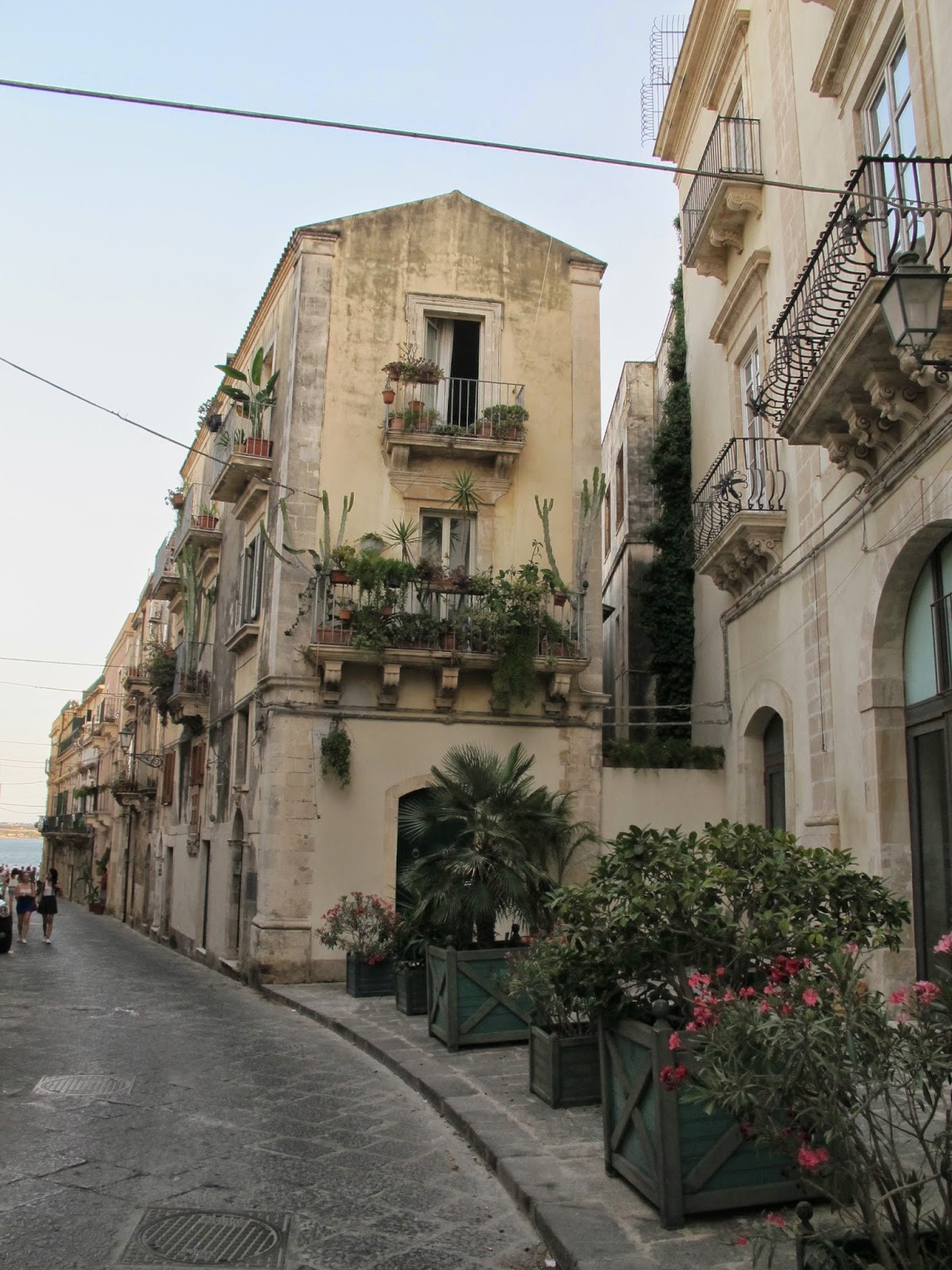 The audience of English and non English speakers couldn't understand much of what he said but that didn't faze Dario. He told stories and introduced the pieces in an excited mangled English that had everyone charmed. But where is the English girl in all this.

I had arrived at 9:30. Dario was having a break and was standing at the front entrance and beside him was a young woman in burnt orange, her dark hair and skin glowing.. I recognized her but the transformation from kitchen hand to this new self was remarkable. Dario was talking as if he needed to tell us his whole life story in the next five minutes and we listened. When he returned to his guitar I purchased a glass of red wine and chose a comfortable leather bean bag with a good line of sight. I was joined by Nicola and when I left at 11:30, two hours later, I had heard something of her story.

What was she doing in Syracusa? I wanted to know. Why was she at MOON every night even when she wasn't working? And the answer? Here's the brave part.- I'll try and keep it brief.

Raised in Kent, hated school, had some confidence issues which were exacerbated by an unwelcome stint as an exchange student in France with a family all of whom were barking mad. She was fifteen at the time and returned shaken. Her final three years of school were in the Steiner system - the best years of her school life she said.

Two years later as a twenty year old, having spent time studying cooking and other practical skills (the nature of which I can't remember) at an institute of technology (Polytechnicals I think the English call them) she knew she had to escape, to find her feet in the world and risk growing into an independent adult. Brave? Well yes. She sent off a swag of emails across Europe seeking a position and Barbara responded and here she was in Syracusa. Nicola, the girl raised in Kent with a rounded English accent and the skin and eyes of a southern Italian (her father is Calabrian from the Amalfi) has had the courage to be alone and at times lonely. She's finding it hard as I, a man in his sixties, also did when faced with ten weeks in Malta with no connections to family or culture.

My experience surprised me. Fears, self doubt, a sense of being trapped rose to the surface and an inner voice suggesting that I didn't have the guts, the wherewithal, the mental toughness to survive was my constant companion. But it passed as my friends at the end of my email system assured me it would. Nicola is experiencing much the same and if she can tame her demons then she'll know that when the next challenge arises she can meet it. We talked about survival and mental games we play to cope and she admitted that she, the girl who never cries, had found herself in tears more than once. 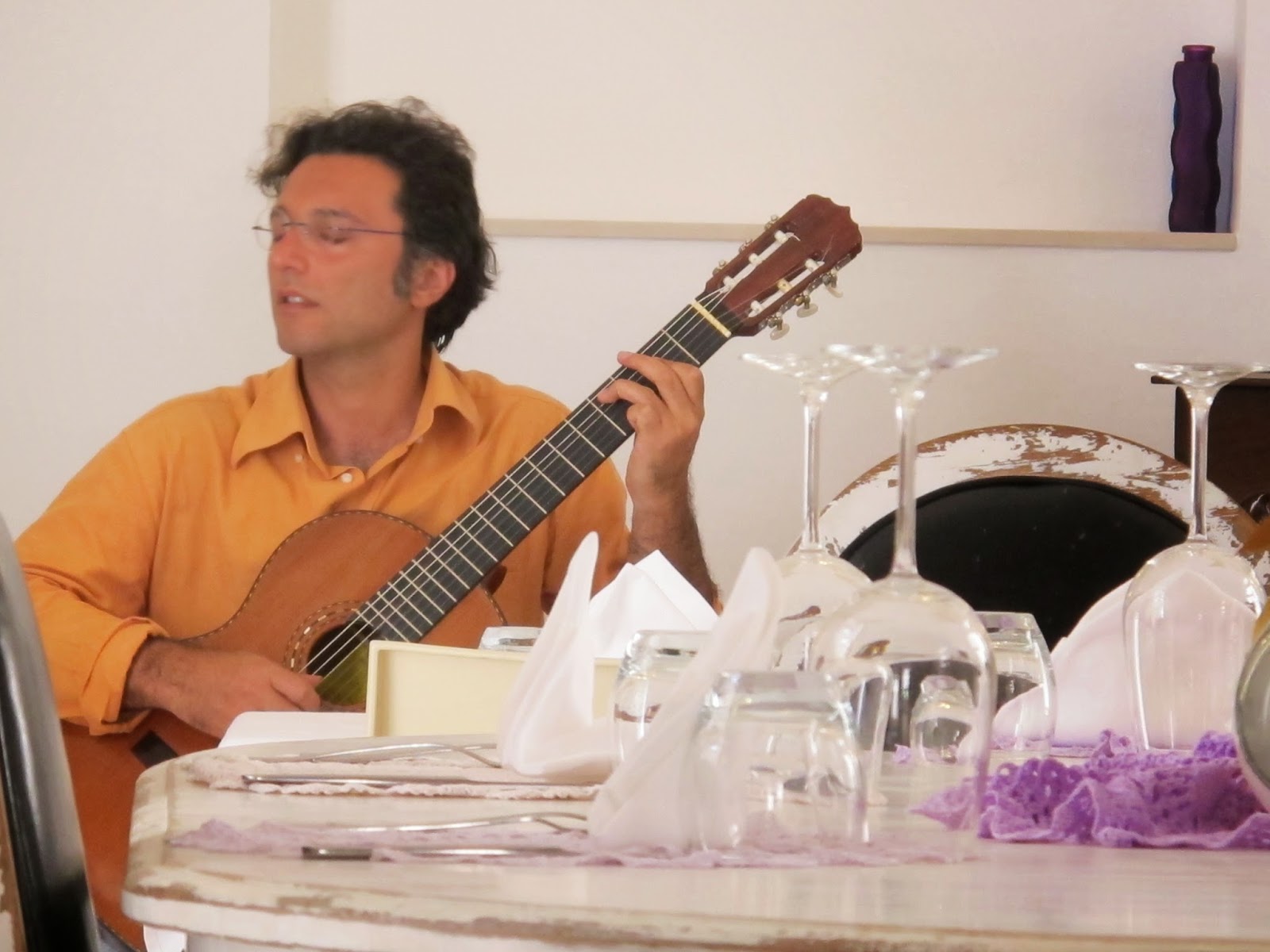 As Dario played for his small but appreciative audience, his fingers approaching the point of pain, and in between gypsy girls offering budgerigars for us to nurse and fondle (for a price) and over that long glass of wine something happened. That strange thing that can happen to travellers who seek human contact when away from the familiar. I thought we connected. I may be deluded but I felt part father, part grandfather and part friend for that brief two hours. Dario completed his marathon set with a traditional tarantello and we bad farewell probably to never cross paths again.

Except for the fact that Ortigia is a small community and the next morning as we dragged our luggage along the gray cobble stones towards our bus thirty minutes walk away, there on the beach below was Nicola sunbathing on the lumpy pebble beach. Hey Nicola, I called. She craned her neck to look up. Arrivederci,
I shouted. Is Andrea reading again? she called. No, we're leaving. We have a plane to catch in Catania. And with a doff of my hat and a final 'enjoy Malta' from Nicola we bumped our way towards the Via Roma and past MOON one last time - where Dario was playing again (still playing perhaps) and Barbara was at work behind the bar in another elegant black shift.
Posted by little hat at 18:57