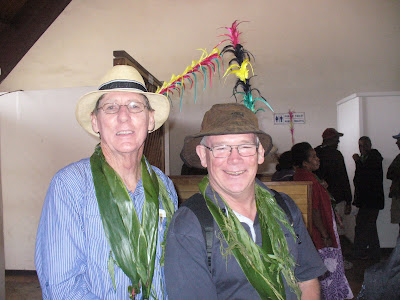 Paul and I almost missed the welcome our host had arranged for us and our group. We walked across the tarmac in the drizzling rain and entered the one room arrival area, a room about 5 metres square. We watched as the ground staff loaded and unloaded the baggage from the twin engine plane we’d just arrived on. As we had checked in early it stood to reason that our bags would be the last to emerge from the bowels of the aircraft.

Before they arrived I heard a call: ‘Stif, Pol, over here’. We followed the sound of Franklin’s voice and headed back through the entrance gate towards the plane. As we emerged through the doorway there, lined up beside the building, were four young women in make-up and traditional costumes, two chiefs in tribal cloth , and Seth our Tanna host. We were greeted, swathed in fresh garlands of greenery and given a feathered adornment which was supposed to be held in our hair. Problem was our hair was short and soft. The feathers were designed for tight curly hair. We improvised, me by putting mine into the band of my hat and Paul by arranging his behind his ear.

So began our visit to Tanna.

We then travelled 20 minutes along the coastal dirt road over a series of fast flowing creeks in 4wheel drive vehicles finally arriving at the Nakamal where we would be working for the next week. Here we again were treated to local hospitality with a morning tea of peanut butter sandwiches, fruit and French style donuts. Next was Tanna Lodge, ten minutes awy.

We were shown to our thatched roofed accommodation on the black volcanic sand beach and then spent an afternoon in the drizzle enjoying the view, dark clouds hovering low over the Pacific.

A group of mature women who had been stranded at the airport when their transport from the eastern side of the island failed to materialize were unexpectedly accommodated at the Tanna Lodge. They had hit paydirt. Unbeknown to them or us Seth and Hugh (owner of the Lodge) had arranged a surprise performance for our group of facilitators.

First was a family string band singing fabulous harmonies and that, ewe thought was the end of that. Suddenly our coffee was interrupted by a group of eight warriors who invaded the dining area and proceeded to perform a series of traditional and at times funny contemporary dances accompanied by chants similar to the Maori Haka and then danced to a sound track – the ni-Vanuatu version if a John Travolta soundtrack. The local ladies were in fits.

I went to bed at 10pm the music and dancing continued until about 11”30 when the party animals in our group were ushered off to bed.

How wonderful - looking forward to reading more about your trip