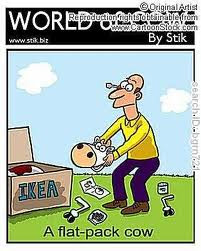 My son and I spent the afternoon putting together some 'flat-pack' furniture this afternoon. It was a nice opportunity to spend time working together. Father passing on some of his highly developed technical skills to his son.

There are too few opportunities for father-son bonding in my life. I keep busy, Nick keeps busy. We occasionally go to the football together; two years previously we spent a week at Carnarvon Gorge walking and camping with my mate Denis and another 'old fella'; last year we spent a weekend camping in the high country of Stanthorpe freezing our butts off in the middle of winter visiting wineries and climbing granite outcrops.

It's winter again and though the sun shines each day the cold gets into your bones. This year our bonding looks like being an IKEA experience. Nick has moved out. He moved out for the first time eighteen months ago when he got a teaching contract on the Darling Downs, the fertile tablelands one hundred kilometres west of the coast. He was terrified of living in the country so chose to live in Toowoomba, a regional centre, ahead of Clifton, the tiny one street, six shop, grain silo siding where his teaching job was located. He survived his year and discovered the joy of living in a household other than with his parents.

He quite liked Toowoomba and learnt a lot from a year in a tough country high school where talented young sportswomen were forbidden by their fathers from competing at the state athletic titles because they were needed for early morning milking duties; where one young fella chose to sleep on the footpath outside the Principals residence because he figured he'd be safe there. Those places teach you about the best and worst aspects of family life.

He came home at the beginning of 2010 as the Clifton contract, a maternity leave back-fill, was not extended and he was desperate to return to the city and his mates. He moved back in with mum and dad for a couple of months. And stayed eighteen. Mum and dad then went away for two weeks over Easter in 2011 and he rediscovered the delights of independence.

So he's gone. He's signed a 12 month lease on a two bedroom apartment in the neighbouring suburb of Yeronga, an inner ring suburb five minutes drive away. Funny, it's been less than two weeks since he left and we've done more together in that time than we normally do in a month.

Furniture is our common bond. I have a tow bar and access to a trailer and he has a bed, and a fridge and a washing machine which need moving. Saturday morning we head to Springwood, a half hours drive south on the motorway. The IKEA showroom is less a building and more of a football field with a roof. We find a park (under the football field) and head upstairs. I nearly turn back to the car when I see the crowd. It's like it's grand final day and it's a sellout.

IKEA is designed to sell you stuff. You enter one end and can't deviate from a preset path until you reach the exit 30 minutes later. As a maze it works well. I wish I was a kid again and maybe I could enjoy it. We do some aisle surfing, swerving in and out and around families who seem to have come for a sightseeing trip. A day out at IKEA. We're efficient. We spot the table we want, sit on four seemingly identical plastic chairs and select the cheapest and head towards the pick up area and the exit. Nick has noted the code and pick up aisle on his iPhone. Things are going smoothly. We find the aisle, load the flatpacks on to a trolley and head for the cashier. We're all done in twenty minutes. We've broken the official land speed record for shopping at IKEA.

That afternoon the fun begins. We carry the rectangular packages up one flight of stairs to the flat and feverishly begin to pull the boxes apart. Ten minutes later the floor is awash with discarded plastic and cardboard and we've laid out the pieces we need to put together. We start with the table. IKEA instructions are designed to work as well in China as on the coastal plains of Australia. Everything is set out as a series of diagrams.

At first glance it looks like a simple task and the first few steps flow freely. We chat and laugh and line things up together, the only challenge comes with attaching the legs. Hey, who needs legs on a table? We choose to continue, deciding eating Japanese style is probably not our ultimate goal. We do manage to finish the job and set it up in the corner of the room. It's white melamine and looks good. Our struggle with the legs was a simple case of alignment - bolt with socket. We've made a few false starts but it doesn't prepare us for the chairs.

These chairs are SIMPLE. Four pieces of black metal plus a plastic back and a seat. We also have two screws, four bolts and an Allan key. We follow the large diagrams. They are designed for children and could translate into a childrens illustrated story book - "My Chair". Sadly these two adults have lost their ability to read children's books and the first horizontal metal rod connecting the left and right frames across the front takes twenty minutes to attach. We've explored sixteen variations in our attempts and finally have them in place.

We then turn our attention to the rear cross bar and after five minutes have managed to complete the second step. Next comes another straightforward task. The diagram tells us we need to "slide a plastic sleeve up the back upright, rotate and attach it with the screw provided". This takes another seven minutes. Nick is impatient and keeps trying to force the screw, consistently missing the intended destination. I take over and demonstrate to him the art of gentle persuasion. 'It like making love to a woman' I tell him, 'don't force it. It's all about touch. Be gentle'. He looks at me bemused.

I may be older and think myself wiser, but my eyesight is not my best ally. The black plastic sleeve and the black metal frame contrive to turn me into a blind man. I can't see the hole. I resort to closing my eyes and working by touch, caressing the pieces into place. The final step in constructing the chair is to slide the plastic back over the metal sleeves and then over the plastic guides until with a final 'CLICK', the only words included in the instructions, it will be finished. But there is no way the plastics will fit, let alone 'CLICK'.

We try the same step a number of times until out of the corner of my eye I spy the instructions lying beside me as I work on my hands and knees and the penny drops. 'Shit', I say to Nick. 'We've got the frame reversed'. 'Are we dumb or something?' asks Nick, beginning to lose confidence in his intelligence and his fathers. I assure him that IKEA has set out to achieve this outcome on a global level. The Swedish pointing out to the rest of the world how intellectually and visually advanced they are and how far we have to go before we catch them.

We start again, unscrewing all the connecting screws and bolts until we again have a pile of bits strewn around us. It's now thirty five minutes we've spent on this one chair. Luckily we have learnt something from the previous excruciating experience and our second attempt achieves an outcome in five minutes. The sun is sinking. We decide to proceed, attacking the task of putting the final two chairs together with enthusiasm.

We have succeeded in completing our task. We have managed to avoid serious damage to our relationship and I have demonstrated to my son that my sixty one years of life have taught me many things, about women, relationships, trailers and tow bars, curtain rods and light fittings, cooking and budgeting but clearly I have not reached full competency in the IKEA department.

It's then that Nick digs into his pocket to check for messages on his iPhone. His face drains. It's not there. I pretend to stay calm. We retrace our steps and realise that he must have put it on the shelving in the aisle where we loaded the table on to our trolley. We've been so busy he hasn't paid attention to his favourite toy. 'How much to replace your iPhone if you've lost it' I ask gingerly. '$900' he replies, his body language giving away his despair.

It's a forty minute drive down the highway at this time of day. We're part of the endless sets of tail lights as we have another opportunity for extended father son bonding and we have IKEA to thank.
Posted by little hat at 19:05

Ahh IKEA - its the same the whole world over ... the long line of traffic heading to worship at the great furniture haven.

Hate the place with a passion but need beds etc thats were we head. My son has proved to be a pure genius at IKEA kit construction - I am thinking of hiring him out ...

Hope you found the iPhone!

Great story. Haven't experienced the IKEA pleasure yet but putting together those computer chairs is always an interesting exercise.

Clifton! Clifton! Gawd. Poor Nick. We drove through Clifton the other day on our way back from Warwick. Clifton. Whew! And he survived.

Did Nick get his phone back?

For all those concerned about his phone. Thank you. But to tell you would break the unresolved tension in the story.Maybe a future story will reveal the outcome.

haha! Well should we be thanking you for not destryoing the unresolved tension in the story? Actually, I think maybe yes.

I really enjoyed this. It might have something to do with the unresolved tension left in me by some IKEA purchases years ago. Na, really you know I love "moments" like this.

Ben told me Andrea sent this story to him with her letter. He liked it a lot. I could hear him smiling.