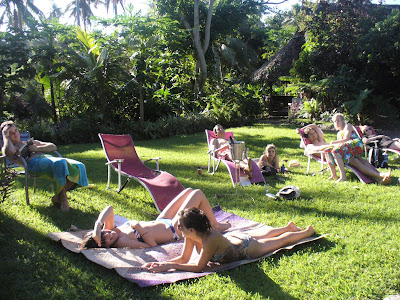 I was told that there are no ni-Vanuatu doctors. An exaggeration perhaps? Or perhaps not. There is no medical training available in Vanuatu. Fiji has the nearest medical school and the fees are prohibitive. And so the voluntary efforts of Australian (and other) medical practitioners are often the only medical treatment on offer.

I met two groups in the past week. One was a group of 25 Australian health practitioners - doctors dentists and other specialists, who had travelled to Vanuatu at their own cost to work in remote communities for a week. They were part of a pastoral Christian group and drew members from across the nation. The two I met were from Kalgoorlie in Western Australia, a gold mining town remote enough in itself. They spoke of seeing thousands of people in the week including some babies and young children with malnutrition due to a diet of powdered milk and milo. The dentist was particularly busy extracting teeth.

The other was a group of medical students from Wollongong University. This group of second years was spending two weeks on Tanna attached to the Lenekal Hospital. One of the young men had a connection. His father is the administrator/head clinician at the hospital, even though his skills are in biochemistry. Things are desperate.

These eight students have set themselves the task of collecting samples from villages across the island to test for the presence of TB. It’s not a simple blood test but the collection of sputum samples. Not pretty work. The men of Vanuatu are not averse to a good cough and spit, mind, as this is the after-effect of drinking kava. They have identified about 15 cases from about 100 samples analysed in their first week.

This is the first stage. They hope to use the data to support their application for funding to return and begin a treatment program. They have established their own charity to raise money to continue to support this work into the future. They reckon they need $60 000pa to continue.

People are amazing.
Posted by little hat at 19:22

Its only when you get there you find these sort of people ... in the general scheme of things their good work goes unnoticed (mores the pity)