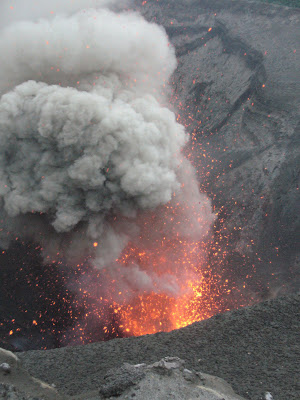 I wasn't expecting too much from Mt Yasur, Tanna's active volcano. I thought I might see a pool of lava far below me. I thought maybe some volcanic ash (and maybe a QANTAS flight plunging to earth); maybe some rocky lava fields from eons ago. Not much. But I was determined to see it. I mightn't 't get a second volcano in my life I figured.

I was not disappointed. One and a half hour drive in the trayback of a Mitsubishi 4WD ute over the worst oficial roads I've ever experienced brought us to a black ashen plain at the foot of the monolith. A further ifteen minutes up a 30 degree incline past walls of steaming earth lining the road and we were parking a mere 250 metres from the summit.

We climbed the lava strewn path and reached a plateau which gave us a view of the crater below. It was smoking with occasional jets of sparks and associated huffing and puffing from the fissures below. I ventured closer to the edge. And then the f....ing thing went off, exploding with a thunderous blast, sending shockwaves through the ground under my feet and lava shooting about 200 metres into the sky above us. F...k I thought and scuttled back a few meaningless metres to save myself from certain death. I was hooked.

We stayed another hour and a half watching transfixed as this beast of the earth coughed up clouds of lava and belched black sulphorous smoke into the sky above. It seemed like it took a breath after each blast and prepared itself for another magnificent belch. The sound was disconcerting, as if the mountain was warning us off.

We stayed until the sun had set. we got a final sunset performance and stumbled back down the slope to our waiting 4WD for the rough ride home with my collection of photos - every one a variation on the same theme - KAPOW!
Posted by little hat at 20:07

Sheesh! I quake at the thought! ♥

Bit different to lounging in banana beds in a pretty tropical garden.

Wow. That is so far off from anything (or landscape) I've ever known. I expect I'd be inclined to stay too. Do you make a wish or something?

I can't think of what to say (a first for me)... how fantastic. I would have been scared sh**less but transfixed at the same time