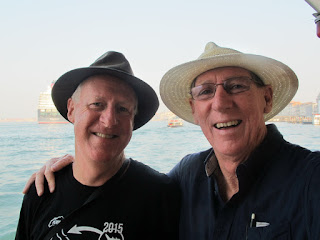 Love him. Always have. Sometimes close by, sometimes at a distance; sometimes forgotten in the midst of life and love and travel. He married and had kids, so did I. We lived in distant cities and towns and both ended up back in Brisbane.

It isn’t a blokey kind of love – beers at family BBQs or cheering on football teams, though they are there too. It’s a love as I imagine love should be. I love him and like him for all the best reasons and this trip has shown me all those more clearly than I’ve seen them since we shared that bedroom more than fifty years ago.

He’s easy to be with; we share a sense of humour; he’s generous with his time and his attitude. We share a set of values (I can’t imagine sharing meals with a narrow minded bigoted brother – we’re lucky brothers in that). We’re both forgiving of each other’s annoying habits (which neither of us can see as clearly as the other – did I mention that he snores? He’s in denial about that.) He would have something to say about my habits but he’s much more discreet than I am (he does hint at my eccentricities but doesn’t go into details). He does think I need a new hat. Mine is loved and battered; his is loved but cared for.

We’re not identical, not in the least. He notices things I miss. I can speak some Italian (through hard work and perseverance), he can intuitively read Italian signage. I come to the rescue with the vocab I’ve learnt and we combine to make sense of the world. He has a great eye for colour and composition (his photos and dress sense attest to that - my hat is a case in point); I have a facility with written language and speak of personal feelings. He is science and art, I am art and science. He has a good sense of direction, so do I but on this trip he’s been the navigator whether on road or on foot. I trusted him implicitly.

Only once did I get frustrated, though it wasn’t really his fault. He took us on the scenic route between Udine (lovely city) and Orsago (tiny village where my g/grandmother lived with her first husband for fifteen years  1865 – 1880). We squeaked along narrow roads in the foothills of the northern mountains (the lower Dolomites) until we were suddenly blocked.  The major road through a village was closed for the day for a cycling event. We re-routed and again the nearby village was also closed to through traffic for the same event. Mick tried this lane, that road, left at this fork, higher into the hills, across that bridge, all assisted by his girl Friday on his iPad. All to no avail. Alas we were forced to retrace our steps.

It was late afternoon. I was tired. I was over the idea of by-ways so when we got to the SS something which would take us to Orsago and he suggested we take “the scenic route” for the final Ieg I was not impressed. I remained calm and said: ‘Non. Directtore per favore,’ and off we went. That was our biggest disagreement in two weeks.

For my part, I am more inclined to be dangerously social at times – hungry for connections. It was my idea to knock on the doors of complete strangers in isolated villages in the vain hope of finding a familiar Italian face (and we did). Mick never hesitated to follow, documenting each encounter on film.

And so we are two but one. We are solid. For me this has been a great rediscovery of my brother. One which is timely as we enter our dotage. Heaven forbid, one day we might end up in the same old peoples' home together. I hope we would recognize each other and remember all this.
Posted by little hat at 22:06