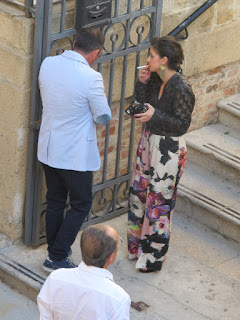 Yep. I'm in heaven. Albeit an unlikely heaven. It's Sunday. The devout attend mass across the road from my balcony, sneaking out for a quiet cigarette when things get slow.

In the afternoon Marsala was closed. Not a shop open. Not that I can fully vouch for that because I was at the local saltworks, just outside the city having a break and a beer having worked up a thirst after my day at beautiful Erice (I've decided to skip Trapani - SHOCK! HORROR!).

Tonight I sauntered forth expecting to have to search for a place to eat. I assumed all the good Catholics would be at home kneeling in penitence begging forgiveness for what they might have got up to on Saturday night BUT to my surprise the place was pumping. Kids, adults, babies in strollers, grandparents ..... There was a pop concert going on in the main square (which is quite small - something I like about Marsala); It's butt ugly to drive into but intimate and charming once you find the centre - marble paved laneways, human scale piazzas, most of it pedestrianized.

Found the Osteria I was looking for and had what might be my most delicious seafood meal ever - so simple. Tuna, lightly seared both sides (olive oil and salt) and topped with lightly grilled and chopped zucchini, mushrooms and slathered with pureed Sicilian mint. MMmmmmmm. A complimentary glass of Marsala which reminded me of my father - I'm sure the only heavy wine we had in the house was a Marsala. Sweet and rich. Plus a plate of sweet orange slices to finish off. Come over (or invite me to cook) when I get back and I'll see how close I can get to tuna Marsala style.

Yes there's more. In the back streets, in the shadow of the giant (and ancient) stone city gate, now named Porta Garabaldi and dated 11 maggio1860. Garabaldi made Sicily his first stop (I hope I'm correct in this) in leading his red shirts on their campaign to unify Italy. We Venetians didn't appreciate our loss of independence and held out until 1866; the papal state opposed unification for even longer. Where was I? Oh the gates. Yes in the shadows of the gate, a bar - La Marinara (its a seafood city); and at the bar a band, five piece playing funky rhythms and Italian vocals. It was infectious. So there I was dancing in the street surrounded by all those previously mentioned but particularly young women (25 - 35) dressed for a big night out (at the bar?) and also grooving along to the music.The Sicilian ladies go to a lot of trouble for a simple night out - even Nicky used to do the make-up thing before accompanying me to a cheap Trattoria. She couldn't bear the thought of being seen as a scruff - pity about her choice of company!

And so a night out in Marsala comes to a close and I haven't got a photo to show for it. That may be a good sign. Too busy enjoying myself to be bothered with a camera.

Here's a couple of Erice and the salt pans of the Marsala lagoon. 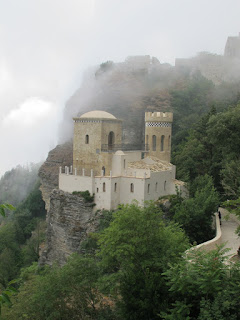 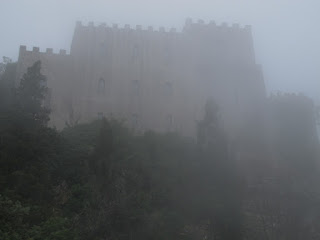 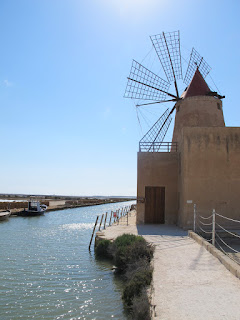 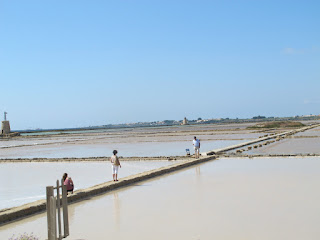