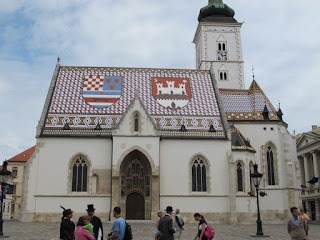 Mick and I have always had separate beds. I just want to be clear about that. I just like the sounds of the words in the title of this blog.

Speaking of beds, I still have the two identical single beds which we slept in for sixteen years in that tiny bedroom. They are identical pieces with silky oak bedheads. The sagging wire base has been replaced by plywood sheeting but they still sport the Clark Rubber mattresses of  the 1950s - there's a pretty good product endorsement. They are lovely pieces of craftsmanship of the time. I couldn't bear to dump them ten years ago when we cleared out the Morningside house. Since then they've been slept in by my son, my daughter - one each (isn't that sweet), a couple of nieces and nephews and the occasional over-nighter.

In Zagreb, as I seem to be at pains to point out, we again have separate beds but both doubles now. This allows for sweet dreams and reminds us of our wives sleeping alone (we presume?) at home desperately waiting for us to call - NOT. Our apartment is about as big as the average double bedroom with beams for us to bump our heads on - we're in the attic. Little by little we are feeling our way into the city.

.The locals can't quite understand why you'd visit let alone stay for 3 days. On the other hand they are quite intent on telling you all about their history and their sometimes famous but unknown historical figures Nikola Tesla (electricity), Goran Ivanisevic (tennis - Wimbleton Champion 2001 - beat Pat Rafter),  Ivan Mestrovic (sculptor up there with Rodin).

The poor girl who took us on a walking tour on Friday really had a serious case of "my Zagreb" syndrome. She couldn't leave out anything. As a result Mick and I (who were the only ones on the walk) yearned for escape at times but couldn't. She took the first hour to go 300 metres. She described the inside of the cathedral before we went in and then proceeded to describe it again inside - every statue. The second hour was much better thank god.

The Zabreb cuisine is a little like Portugal - lots of potatoes and grilled meat or fish. Potatoes with everything. The architecture is beautiful -  mini Paris comes to mind. The squares are large and thronging with locals out for a coffee and a stroll. There are tourists, but they're thin on the ground compared to Italy and places like Berlin.

And did I say compact. At the end of the day we took a tram ride which took us on a loop which almost encompassed the whole3 city of 800,000 people. It only took 40 minutes. While the centre is picturesque and historic the suburbs are very much soviet highrise. Block after block of towers surrounded by desolate deserted green spaces. It brought the romance of Zabreb into the world of reality.

I understood why the centre of the old city is still vibrant. It is the only place with a sense of place and vitality.

A moment of truth for the traveling Cappellin brothers.
Posted by little hat at 06:42