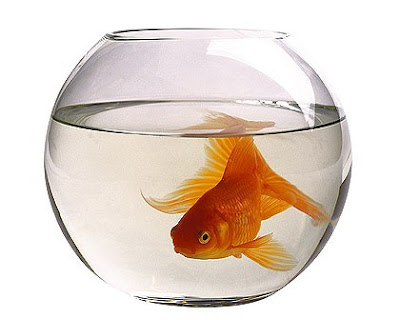 Peter Otto was a special fish. He lived for ten years in a gold fish bowl swimming in one direction until he died of arthritis brought on by his uni-directional habit. His spine became permanently curved towards his right shoulder. An occasional anti-clockwise lap of his pool may have extended his life even beyond his remarkable years.

Peter Otto 's major challenge in life was maintaining a working set of gills in the midst of the ever darkening toxic waters of his tiny bowl. Adventure was not a concept known to him.

Perhaps his longevity was due to his zen-like acceptance of his simple life and an understanding that the way forward was the way forward. I would have died of boredom.

Peter Otto died a lonely accidental death in the freezer compartment of our fridge and now resides forever at the bottom of our garden. Our garden of our last house that is. He never made the transition.

At our new house we put in an above ground pool which after ten (yes ten again) years we ripped out and replanted as a garden. As a way of fulfilling our need for 25 thousand liters of water in our backyard we included a 250 litre pottery water container amidst the new plantings. It was home to water lilies and some bullrushes. Concerned about the possibility of breeding swarms of disease bearing mosquitoes at the bottom of our garden I sought advice from my local aquarium and brought home some guppies who were guaranteed to devour the larvae before they could hatch.

Whether these tiny fish were what attracted our new visitors I wasn't sure but a day later a family of kookaburras began visiting the pond, perching on the edge and plunging in for a cool bath or carving up the water lilies with their powerful beaks. Within two days there was no sign of the guppies and the lilies never recovered. Had the guppies died of fright? Were the kookas just great at fishing?

I tried a second time and this time included a goldfish, thinking that this hardy breed might fight off the invading swimmers. Within two days the pond was again silent. The kookas continued to visit and entertain us. I kept a container of fish food for a few months then chucked it in the bin. Meanwhile the garden grew. The bottom of the garden became a wild place. The bullrushes fought back and the kookas couldn't find a landing spot. The lime tree failed to produce a crop two years in a row while my composting system evolved and became my pride and joy. I even put together a vegetable plot and provided the family with a regular supply of leafy greens.

This last weekend I did my regular wander to the bottom of the garden - "inspecting the estate". I pulled a few weeds, talked to the lime tree and harvested a handful of late season macadamia nuts from the tree overhanging the old pool site. As I passed the pond something caught my eye. I froze, staring into the murky depths beyond the scummy surface. At first I thought it was the light revealing the colour of the root system at the base of the reeds. I touched a reed. The rusty colour disappeared. I stood for another minute and the colour didn't reappear. so I wandered on.

As I passed by a second time there it was again, a rusty orange spot, motionless. Another jiggle of a reed and there was a small movement. Another and another. I called for verification from an independent observer and sure enough there it was. Peter Otto had been reincarnated as himself. A gold fish living in my pond which I had passed by every week for two years?

Was this a miracle? Had this visitor been deposited by a passing bird of prey? Had he been sent as a sign to me? What was I to make of this? Was there something in my life which I should change? Should I divorce my wife of thirty years? Was it there to help me understand that my new career as an unemployed freelance community worker would take time to emerge? Was it showing me that patience and acceptance were virtues that would bear fruit in the long term? Or should I pack up my worldly goods and go and hide from the world? Become a hermit in a cave, or in a large pottery container?

I considered heading for the shop to pick up a new container of fish food then reconsidered. A fish that had survived on the detritus of pond life for two years needed no help from me.

I considered all the options offered my by this sign from the pond and decided to stay. I'm still here close to the miraculous site. Welcome home Peter Otto (the second coming).
Posted by little hat at 17:07

What an inspiring tale!

I don't think it means you should do anything radical - Peter Otto II didn't survive this long by being radical!

I am extremely impressed with Peter Otto I longevity, and equally by your cause of death theory ... did you carry out the post mortem?

I looked up some of the symbolic meanings of fish (couldn't find goldfish specifically) and some are:

There are loads of others, but it's my comment and I'm choosing these as potential kickstarts to reflection.

Or a disinterested "I see."

Jane, I attempted a post mortem but given his frozen state I merely broke the scalpel. My investigative skills led me to interview the last person to see him alive who stated: 'He was floating belly up in a pool of water" "I assumed he was dead." "He didn't resist my move to relocate him to the freezer" "On reflection perhaps I could have attempted some resusitation techniques but I was afraid that i might accidentally swallow him"

Jenn, thanks for your in-depth research into this mystery. Wiothout making too light of the matter I agree that any event can be an opportunity for reflection. That's a pretty pleasing list. Perhaps the fertility option is a bit marginal but the rest of the list are my dream life writ large - with transformation as the final element. Wow!
Andrea is part of a regular trio of ladies who have been meditating weekly for the last seven years based on a buddhist approach. Perhaps her influence is in there too.
Strangely I did have a revelatory moment on Sunday evening while listening to music at a friend's house concert. It became very clear that what i really wanted was to continue to explore and find an outlet for my creativity and performace side AND NOT get locked into long term employment which would hinder this. And then an email on Monday offering me an extra piece of work on the Vanuatu project(10 days in June). Perfect timing. "Happiness and Freedom"

Tea hea hea. That is very funny.
A good read.

Great story... and the nasty diseases didn't get you despite your lack of guppies. Interesting...

Your comment on my blog appears to have been lost in the black hole of the recent Blogger outage, but just to say I did read it, many thanks. Enjoying your blog very much, which I found through Cara's Brisbane photo blog.

How brilliantly bizarre! I'm coming back as a goldfish now....I didn't really want to be a 200 year old turtle anyhow...!!