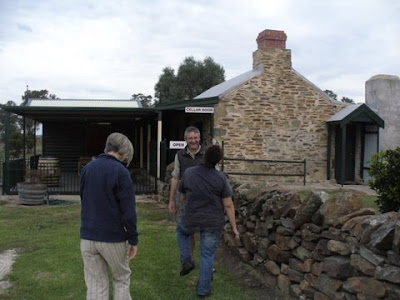 We'd had a great day. The Barossa Valley vineyards winked at us, their afternoon autumn colours flashing through the red gums lining the road as we turned for home. We'd visited Maggie Beer's farm and picked up some of her treats as featured on her TV show "The Cook and the Chef", Maggie being the cook. The Richmond Grove winery had treated us to a set of Rieslings going back as far as 1998, the leftovers from the previous day's wine-tasting festival.

Denis suggested we finish the day with a visit to one of the boutique wineries of Eden Valley about thrity kilometres south on the Adelaide Road. Denis always makes things sound so certain that I had visions of him leading us to his favourite secret location, carefully chosen from the many. From the passenger seat I opened the tourist map to peruse our options. Mike, who had demanded we stop at the very first winery we encountered and then argued for a stop at every one of the sixty in the Barossa region, seemed content in the back seat. His taste buds had been satisfied with our choices. He and his wife Angela were in their first month of their drive around Australia, having begun two thousand miles north in Queensland.

I could only find one cellar door listed in the Eden Valley district. That'll do said Denis, barely betraying the fact that he hadn't had a clue where we were heading. It was quarter past four. My guidebook informed me that Fernfield Wines was open seven days a week from 10am to 5pm. We turned left off the main road as we passed the Eden Valley Hotel and were soon following a dirt road which followed the vineyards planted to follow the contours of the low hills. The entrance to Fernfield had a 'Cellar Door Open' sign propped beside the road but the signage on the gate informed us that they were only open 4 days a week from 11am to 4pm. It was four twenty. We all felt deflated but spying a figure in the distance and sensing an opportunity we boldly ignored the sign and cruised through the open gate.

Are you still open we asked the young woman standing beside the drive. She gave us a doubtful look and with a shrug of resignation, or a sniff of one last sale, she ushered us towards a small stone cottage fifty metres distant. I guess we can make an exception since you're already here she added. She was a broad faced woman in her late thirties with the smile and sense of purpose of a working farmer.I've been pressing all day she said proffering her purple palms as proof. 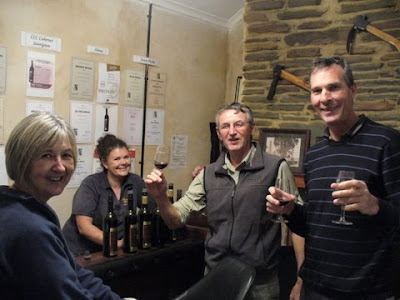 Inside the stone cottage we found ourselves in a room with space for no more than the four of us and her behind the bar. The walls were lined with photos of the farm and images of her father, grandfather, great and great great grandfather - the original. She was a great storyteller and for forty minutes we laughed and joked and heard about the family and the wine and were utterly charmed by this young woman. The feeling it seemed was mutual.

Fernfield was the ultimate family boutique winery. Mother was the winemaker, having enrolled at age fifty-five in a viticulture course which took her ten years to complete; father and brother were the farm workers tending the vines with love and Rebecca was the marketing manager. Come harvest time the four of them joined forces to hand pick, hand crush and hand bottle the fruits of their labour, four thousand cases. Mother's wine had won a medal every year sine 2002 when she created her first vintage - much to the exasperation of the major wine companies of the Barossa who took it as given that they would be the celebrated winemakers. The wine was fabulous. Rebecca's energy and enthusiasm gave it a quality that totally seduced us.

As we turned to leave this charming room, our arms laden with one of every wine on offer I spotted a business card on the sideboard. I figured I might need this as I'd ordered a case and might need to contact Rebecca if it went astray in the post between Eden Valley and Brisbane. I quickly scanned the details. Wait wait wait! I called to the other three. We're not finished here yet. There's one more thing.

Denis looked at me thinking what is Steve on about this time. I looked at Rebecca. She looked at me. You want one don't you she said. Yes I replied. If that's possible. By now Denis and Mike and Angela had stopped in their tracks and were in consensus that I'd obviously lost it. I pointed to the business card, reading: Rebecca Plummer, Marketing and Cellar Door Manager/Singer.

Denis is a musician, a music lover. He was captivated. What do you sing he asked. Oh, opera, classical stuff. You know. The girl with purple hands was suddenly transformed before our eyes. We were in the presence of a character from a grand opera, set in a rustic barn surrounded by us as chorus. 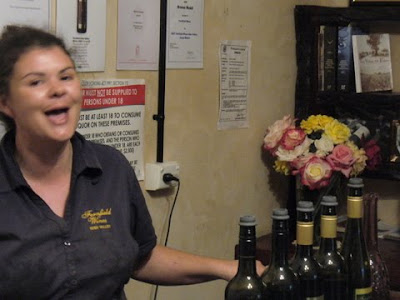 Rebecca offered us a couple of options. Something French I urged. And then Rebecca, eyes closed, standing behind the cellar door bar, a line of half empty bottles of red wine in the foreground, sang us a beautiful unaccompanied version of Piaf's La Vie en Rose .

As she sang she gained in power and knowing she had us in the palms of her grape crushing hands took us on an emotional ride, making eye contact and becoming the epitome of the popular cabaret performer. God, what a way to end the day. As she finished I could hardly speak. I spontaneously took her in my arms and gave her a hug as if she were my daughter. Denis followed.

We walked towards the car in silence, our spirits lifted by this moment you could never hope to manufacture. As we drove off Denis, not one to readily give voice to his emotions, shared his inner most manly feelings with us. I had a tear in my eye at the end there, he said, his footballer's eyes misting up. 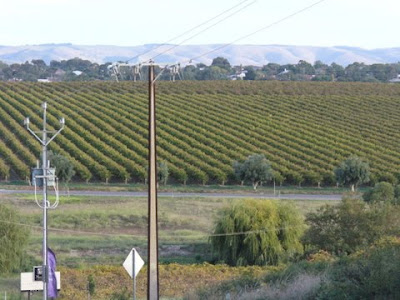 Aw Steve. That is a bit spesh.

One of those mighty magical days. Glad you shared.

God, - why can't my days out end up like this...!! What a delightful lass Rebecca sounds. I'd love to hand out business cards like hers - must be helluva unique!

Fab story and you tell it so well!

Thanks for stopping by Catbird Scout. You are an amazing storyteller - this piece brought tears to my eyes. I'll be back for more.

I still read this and your words make my heart melt!
Rebecca