Stories of loss and survival 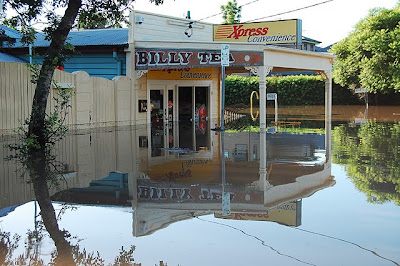 Last Friday evening our local bookshop (Avid Reader) hosted a night of storytelling. The West End Making History group invited community members to come along and share their experiences of the recent disaster. It was a simple community building night. I was invited to play MC.

What a great night. We had lined up a range of people ranging from Theo, a Greek born gentleman who had experienced both the 1974 and 2011 floods in West End (where each time his corner shop had gone under) to Bronwyn who told us of having 26 children under 5 in her back yard at one stage (two sets of twins, one pair being their birthday). People simply dropped kids off on their way to help or to survey the damage.

At 80 Theo has single-handedly stripped and relined the walls of his shop. He shared his distress that followed each event, despite having experienced this previously. With great compassion he expressed deep understanding for those who had been hit this time;
Dan O'Neill had lost hundreds of books from his lifetime library collection;
Francesca told of "looting" her friend'sTony's house with the help an extended network of friends while Tony and his family were away in New Zealand unaware of the impending disaster. Strangely, Francesca's kids knew, not only where the spare key was hidden, but also where the private family documents were stashed.
Tim Quinn told of missing out on both floods despite have been born and lived in the suburb his whole life and Bu, from Ache, Indonesia (his story appears earlier in these blogs as "Disaster is relative - Bill and Bu") told of his relief at knowing he had lost no family members and still had a (rather wet) house to live in.

The mostly late 30s to 70s audience all marvelled at the role young people had played in the post flood recovery and 19 year old Verdi shared her simple perspective: there was a need to help, so we just did it.

Local photographer Cara G has captured the night on her brisbane daily photo blog. as well as some great photos of the events as they unfolded in January.

And so the stories ripple on, building connections across the community in ways we can't predict.

My question now is how far to go in collecting these and other stories more formally in an attempt to capture this oral history for the future? Has the rush of initial energy disippated? Is the pain still too fresh in people's minds to see this as a priority? 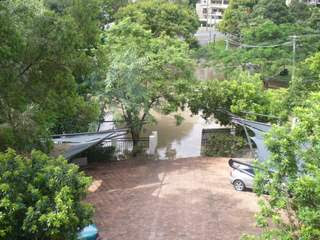 Damn, I missed it. Would have like to have come to that.
Oh well.
next flood.
:-)

ditto!! Great to hear about the writing course and the project....you sound very productive !

Sounds amazing. Wish there was more of this kind of thing available here!

I heard about the evening through Cara's blog and came over here to read more. This is fascinating.

Interesting question you ask about whether now is the time to record people's memories of the disaster. I guess the right time is when people are ready to speak. If they're too busy with rebuilding perhaps it's too early, but the evening you organised shows that many people were happy to share their stories. Congratulations for this community building exercise.