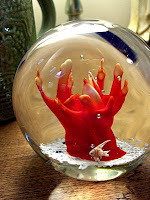 'But I want a dog.' Seven year olds can be so insistent. And deep down we wanted a dog too. Our family had almost everything. We lived in a lovely old timber Queenslander in a cul de sac overlooking the interstate passenger and coal line with trains passing through our living room at eight minute intervals. But I shouldn't whinge. We had breezes from the bay, glimpses of the city, almost weekly fireworks displays presented by the local council with flybys by jet fighters crossing the night sky at tree level, after burners flaring; plenty of on street parking allowing visitors to the local Boggo Road Jail to stop by in their stolen and often abandoned cars. It was perfect.

But we didn't have a pet. Dogs need a lot of attention we explained to the seven year old. They need to be walked every day; they need someone at home to love them; they can't come on holidays and need to stay in very expensive dog motels. We would probably never ever be able to have another beach holiday and Christmas presents would be out of the question. Was that unfair? Was I overstating it? Isn't it important for children to have access to the full facts to help them understand just how cruel life can be?

So we got a fish. My research led me to believe that fish in bowls on kitchen tables with no aeration do not have long life expectancies. We figured the potential trauma of early bereavement would be another good lesson in life and so on the next birthday a package duly arrived. One goldfish in a plastic bag; one glass bowl, diameter about the size of a dinner plate; one fliptop box of food flakes. Outlay, about fifteen dollars.

The fish, who became known as Peter Otto for reasons unknown to me, was not unattractive. He (or she) came with a long feathery tail, golden fins and a white pot belly. He made the transition from plastic bag to luxury prison without a hitch and proceeded to explore his domain. That is, he swam in circles. I don't know if fish are, like humans, prone to favour right handed or left handedness but Peter Otto was definitely a one way anti-clockwise swimmer. Perhaps in the northern hemisphere he would have been the opposite. I never got the chance to test this theory. Though I might have as, unbeknown to me, there was to be plenty of time.

There is not a lot to tell about the escapades of fish in bowls. We did everything required - changing his water every time we could no longer see him through the ever darkening murky water; feeding him the same diet day in day out; letting him out for a little flip in the vegetable colander every time we drained his benchtop pond; and passing him off on friends whenever we went on our annual holiday to the beach. In short he was much loved.

Our seven year old ignored him after two weeks of feeding and watching, having discovered that Peter Otto's repetoire was sigificantly limited.She loved P-O in a kind way but slowly grew tired of him, perhaps understandably, in that she was under the impression that after P-O's demise the dog would follow.

Which may very well have been true but for the fact that P-O was a stayer. He was a resilient little bugger and despite developing a serious scoliosis condition due to his anti-clockwise journey 24 hours each day, he continued to threaten to outlast his owners. His demise came, perhaps inadvertently, 14 years after his first dive into his lap pool when a friend who was minding him for a week mistook his floating on his back, distended white belly to the ceiling, as rigor mortis and humanely, she thought, despatched him to the freezer. We had forgotten to inform her of P-O's tendency in his old age to place himself into a state of suspended animation to conserve energy. His trance, she should have realised, could be broken with a simple tickle with a fork. There was some low key mourning and some consternation about the effect of arthritic pets on food stored for human consumption in freezers. Suffice it to say that the family survived.

Well our daughter was now 21 and with imminent plans to move into independent accommodation with very little liklihood of a fenced yard or parents to feed her beloved pet, the idea was dropped.

Click on the image for more Mapie Tales from writers across the globe.
Posted by little hat at 19:40

14 years? Peter Otto certainly was well loved and cared for. I'm surprised he could still fit in his little bowl!

Enjoyed it very much and can remember the fish-in-a-bag treat as a child. (I don't think my fish lasted 14 hours.)

wow. that is some fish...ours died after about 2 months...many tears and a funeral in a coffin pill bottle...my son even wants us to dig it back up if we ever move. funny his quirkiness....nice magpie. excellently written.

Yes, a 14 year old goldfish would seem to be a natural wonder. Nice story, LH.

A great 'fishy' tale -- amazing 14 years old --loved it --brings back those years when my sons were young -- - one summer when my boys were young we volunteered to take care of the 10 year blind Oscar from the preschool for the summer and the week before school started the fish died -- we had a funeral in the backyard -- my older son declared he will never eat fish again-- and we bought a hamster for the school -- how can you replace a 10 year blind Oscar?
Once again great story.

A terrific look at that age-old desire for a furry pet and all that goes with it. This charming tale with humor streaks is a fine read!

Loved this! When I was a girl we had a fish that actually jumped out of his bowl, landed under a radio, never to be seen again ~ until we moved the radio.

So this is what they mean by a fish story!! Very fun and charming..RIP, PO...

Good comment on what a pet, any pet, can mean to a person's life.

I really enjoyed your story! Peter-Otto was a very fortunate fishy indeed to have lived for 14 years...you were definitely doing something right!

Thanks for the memories! Your story brought back fond recollections of goldfish and turtles won at school carnivals. They all had long lives whether in a glass bowl or large pond.

A regular gold fish? or Koi? 14 years? I believe in Pete-Otto is a miracle. Who'd need a pet after that? Particularly love the line: "developing a serious scoliosis condition due to his anti-clockwise journey" FUNNY!!!Are you serious? The counter-clockwise (whats anti-clockwise)journey could be the key to his longevity. Cryology? Some fish I hear pop right back to...gosh forbide...LIFE! Great story!

I can't believe fish have such longevity! My son got a Siamese fighting fish for his birthday
2-1/2 years ago and it is still swimming away in its glass fish bowl, far away from warm waters.

I enjoy your style!

Ha! Poor Peter Otto. My post is eerily similar. The psychic network is open. Too bad about the dog, though.

this was charming!! who would have ever imagined peter otto outliving even your daughters hopes?? your storytelling is just fascinating and i can't wait to return for more!

I love this family story LH. And wow Otto - he's like some ancient uncle or something! (Wouldn't that be like 95 in human years?)

BTW Thank you for your kind remarks at my blog and about my writing.