Travel for me always begins as an adventure. A feeling of excitement, of potential and of discovery. Only later do I realise that in fact it's really about reflection. and self discovery rather than simply learning about other cultures. 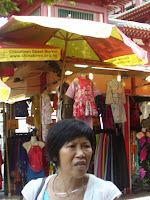 Thus my two days in Singapore worked in both directions. Much of my time was spent in the company of Helene who led the two walking tours which I signed up for. Like the best of teachers she made me think as much about Austrtalia as about the Singapore which she was introducing me to.
Helene is a proud Chinese Singaporean (with a touch of Malay) who walked our group through first the colonial history of the state and then into her personal Chinese history. She was extremely well informed about both but her heart clearly lay with her Chinese heritage.
What struck me was the repeated celebration of herself as a third 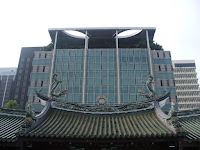 generation Chinese/Singaporean. She had a way of saying it which made it sound ancient. Perhaps this was supported by the fact that we were clearly in Asia.
As I listened I became aware 0f the parallels between Singapore and Australia. That Singapore's history, as we know it, is relatively recent - the British only took control of this trading outpost in the early 19h Century - after Cook and Arthur Phillip had well and truly established Australia as a British penal colony.
Helene's grandparents would have arrived from China about the same time as my paternal Italian side was arriving in Australia and in similar conditions. While they were willing migrants the survival rates were appalling. Only one of her grandfather's 3 siblings survived. In my case my Great Grandmother died on their arduous voyage.
Two thoughts struck me. While personal and national history can be recent, it has deep roots which we sometimes dismiss or fail to recognise. My second reflection was the untruthful way we can present our history when we choose to ignore the indigenous past (Aboriginal or Malay). Singapore was tempted to erase its colonial history when they became independent in the recent past but wisely chose to be honest and own both the good and the bad in their 200 year history, though their Malay origins are not as clearly present..
Posted by little hat at 01:51

Very interesting post and true that we often edit history too much in, what we believe is, in our favor.