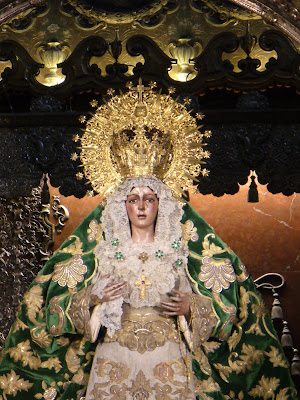 I was brought up a Catholic - taught by nuns, had a Catholic secondary schooling, attended mass every Sunday etc etc.

I was a very devout young boy who in a moment of juvenile madness even considered a vocation to the priesthood. Luckily it was a passing phase. 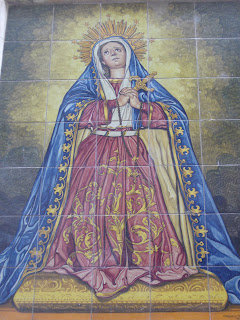 My local church, Our Lady of the Assumption, was lorded over by an Irish priest with a passion for golden tabernacles and hugh golden easter candle stands and other ornaments. The church was small and plain but for the gold. Fr Whelan was a zealous collector of donations to the church - he had a lot of debts to pay off. It's rumoured that when he retired and returned to Ireland so did his treasures but that may just be scutlebutt (in which case I will have to go to confession to seek forgiveness for my sin).

So I am not unfamiliar with the extravagence of richly embossed priests garments and what seems now like pagan rituals worshipping golden idols. I've been there done that. 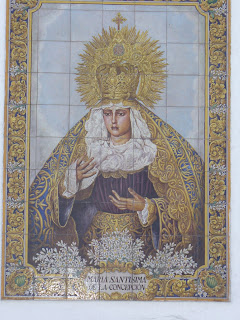 I was not, however, prepared for the madness, the obsession, with the Virgin Mary in Spain.
I swear (there I go again - something else to confess) that her image adorns almost every lane and wall in the central area of Seville and in particular, ironically, the former Jewish Quarter, Santa Cruz (therein lies another story).

She takes many forms as you can see, each going by a different name but the primary Immaculate Conception image in Savilla is La Macarena (protector of Bullfighters among other things). The highhlight of the year is Corpus Christi when she is paraded atop a huge platform (golden of course) through the streets of the city where she is showered with rose petals and accompanied by bands and men dressed in roman costumes and others wearing robes topped with high conical hoods identical to the Klu Klux Klan but here in black velvet. 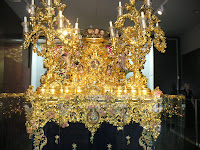 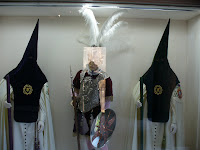 Spain (as Portugal) is fiercely Catholic, at least in tradition. Having spent 800 years trying to wrest control back from the Moors to re-establish a Christian kingdom they are not going to let it go lightly. And the Virgin is on their side. 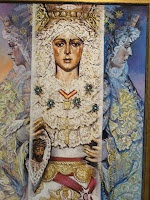 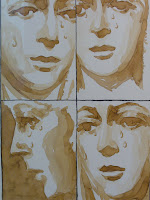 The Immaculate conception, by the way refers to Mar's conception not that of Jesus. She is deemed to have been born in a perfect state od grace and to never hencefrward to have sinned - not a swearword, nor a temper tantrum, certainly no sexy thoughts about boys. Is that your ideal girlfriend? I'm happy to say I'm not married to one of those.

I am also happy to say I am a confirmed agnostic with a love of the great art which all religions have fostered. Most of the above images are on the sides of buildings and made out of beautifully decorated and fired porcelaine tiles.
Posted by little hat at 17:31

The feminist (gasp! the "f-word!") has a lot of questions about this prolonged obsession with the virgin mother and what it has meant to us gals over history. But I digress - this agnostic loves to visit churches and behold the art within them. And the lover of history enjoys learning about what the art all meant. Enjoy!

And the art is absolutely beautiful. So worthy of appreciation.

Jennifer
I'd love to hear more about your feminist analysis. Is there an abridged version? Perhaps I am still a partially unreconstructured Catholic.

In my opinion and you will get it from time to time, is the only things of value that came from Xianity and its other two variants were music, art and architecture! All made poosible by wealth and time, not divine anything. And I reckon Joseph got a rough deal. Pregnant wife and no sex!