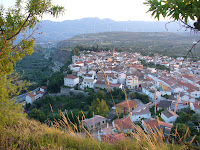 Woke up with a knot in my stomach. Felt like I had a hole the size of a dinner plate instead of intestines.
I’d had a good night’s sleep in a room darkened by timber shutters. Even with the sun in full fury here in the Spanish summer the room was as dark as a bat’s cave. I could have slept all day. In fact I would have preferred that.

My anxiety had begun yesterday as we drove from picture perfect Ronda in central Andalucía towards the Sierra Nevada mountain range and Granada. We descended from the heights of Ronda perched on its precipitous cliffs to pass through a beautiful landscape of olive plantations spread from horizon to horizon across undulating hills with blue tinged peaks in the background. We then gradually entered a broad valley reminiscent of the plains of Australia – brown, flat and uninteresting. I was excited.

Ronda and its mountainous scenery had been striking but I was really looking forwardvto the rugged Sierra Nevada where I imagined that Niguelas, our destination, would be tucked into the narrow end of a deep valley surrounded on both sides by steep cliffs. It would be majestic. My expectations were further lifted when the road curved eastward and there, revealed for the first time, were the snow capped peaks of the range. Our destination was a mere hour away.

Our path would take us past Granada. We would get a glimpse of this fabled city but would hold its charms for a fuller viewing later in the week. Through a series of accidental choices we ended up on the road we needed, a high speed ring road skirting the southern suburbs. From this vantage point the city was disappointing. There was no sign of the ancient Moorish city I had pictured, only a jumble of ugly buildingsof various heights and block shapes. It was a dull dung coloured Lego city. I could see none of the beauty of the ancient Alhambra Palace I had read so much about.

I had convinced my travelling companions of my choice based on the expectation of an exotic Granada surrounded by quaint villages nestled in the foothills of the mountains.

Now I I saw were endless acres of shabby housing sprawling in all directions and not a village in sight. 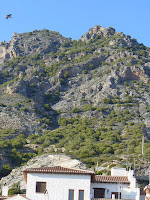 We were still 40 ks from Niguelas so there was no real need to panic. To my consternation each kilometer took us past what appeared to beyet another satellite suburb of Granada. Even well beyond the city limits anything resembling a village to consist of a ramshackle collection of brown buildings occasionally marked by a single bulky church steeple.

In the background the Sierra Nevada rose in a series of steep crumbly hills scarred by huge white gashes apparently the result of quarrying. The hills were bare – not a single tree in sight.

As the four of us drove on there was an eerie silence in the car. Mine was driven by a rising panic that I had booked a house in one of these villages for two weeks and had dragged, not only Andrea, but my brother and his wife to share this idyll.

I sensed a disaster looming.
Posted by little hat at 02:47

Oh, I hope it's not a disaster. I was delighted to learn that my namesake was lovely.

I'm on the edge of my seat crossing my fingers!

it's been days and i'm still holding my breath, waiting to hear whether they tarred and feathered you?? or perhaps you've found something so wonderful that you you're away, enjoying every moment???