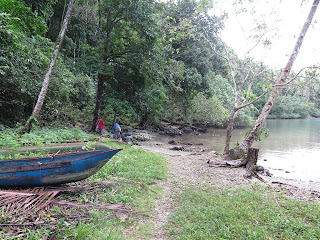 This is Irish Cove. Other accounts of the land which served as the landing point for the colony have referred to this site as English Cove but our guides were adamant that the French based their settlement here at Irish Cove. English Cove sits a short distance away, by foot or boat, in the same bay but to the south. There is fresh water available at both though they described the English Cove spring as better quality. Irish Cove, where 300 European colonists were to establish their community, now supports just one family who live a subsistence existence having planted out much of the arable land.

We met the family who make it home and visited their house built high on stilts like a Queeenslander. Our guide from Lambon Island asked his permission to show us over his tribal land and he agreed. 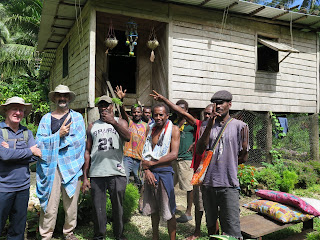 From the narrow beach where the Italians would have landed the land runs inland gradually widening to form a valley about 200 - 300 metres across at its maximum. It appears to have been cleared, perhaps the settlers played their part here, and is quite open, dotted with coconut palms until the land rises steeply and becomes dense jungle. 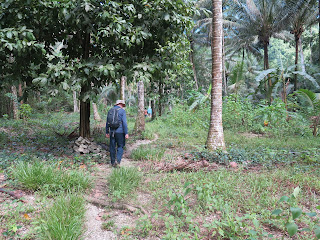 A walking path, which we followed, meandered through the palms. The first hundred metres or so didn't look arable - it was stony and bordered on one side by mangroves. Further along we came to an area which had obviously been the site of a cluster of buildings though the only indicators of this were a few scattered bricks (the Marquis had sent thousands of them for the construction of his promised cathedral) and some rock formations roughly in a rectangular form which might have been part of the base of a simple rough building - the Blockhouse perhaps. The site felt dank and damp, with little sun penetrating.

The existing family have built their house another 150 metres further inland on an open sunny site, on land that appears to be more promising. They've planted cocoa, tapioca, chinese yams, bananas, sweet potato and some vegetable crops in the vicinity of their house but, productivity wise, it was nothing like the lush growth we later saw in the hinterland of New Britain or later still in the Central Highlands of mainland New Guinea around Mt Hagen. In the Highlands you can poke a dead stick in the ground and it will grow. 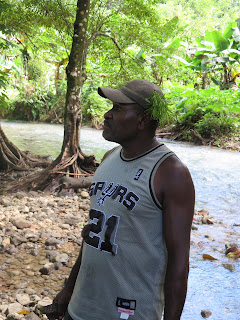 The only moment when I felt at all hopeful when imagining the Italians trying to eke out an existence here was when we next came upon a beautiful fast flowing stream another 100 metres inland. This reminded me of Far North Queensland. It was only small, about 10 - 15 metres wide at it widest and maybe three or four at its narrowest. On the other side the soil seemed to offer more hope. From rough and stony volcanic soil it appeared to be deeper and finer. This was, most likely, the stream that is spoken about in accounts of the site over which a rough crossing was built. Our guides were sure that the settlers had crossed the stream and continued to the end of the valley, maybe 500 metres distant where it rose sharply into the hills. Mt Vernon sat prominently overlooking the site. Our guide said that there were pathways beyond the valley but that the closest next village was far distant in the mountains.

It's likely that there was contact between the locals and the visitors but it would have been these lowland coastal dwellers, the Tolai, rather than those further inland. The Tolai are New Ireland based but centuries ago invaded nearby New Britain and drove the local coastal tribe, the Baining, into the hills. They have a fierce reputation and were active cannibals (exercising it as a form of power over rival tribes) until the 20th century.

Our guides were keen to show us one final site before we left. It was located a short distance around the bay and accessible by boat. We landed on another narrow sandy beach and stepped ashore to find an narrow open area partly cleared which rose quickly to higher land. The locals pointed out sites that they said were burial places for those who had died here. The evidence was slim but nevertheless believable. There were lines of red Cordyline (Palm Lily) which we were told were traditionally planted to mark gravesites; there were mounds of volcanic stones which resembled cairns which might have marked gravesites. The site was separated from the main colony as befits a cemetery and faced east which one of our party suggested might have been significant to the Catholic community. It certainly felt like a special place and had clearly remained so in the memory of the locals.

As for a protected anchorage, Irish Cove is not a deep bay but is deep water and would have been protected from the prevailing southerly winds by Lambon Island which lies close by and south of the bay.

We had been on land for less than three hours but Mick and I felt satisfied that we'd seen almost everything that was available. The only additional thing I would have liked to do would have been to follow the valley further inland and into the forests as the land began to climb. I was interested in what the Italians might have encountered as they explored the area. I've imagined all that in my book but that will be as close as I get to it. I doubt if there will be a next time.

We would have needed another four hours and we'd agreed to meet John's boat at midday. As it was we were in a different inlet from where we had started and John couldn't find us though we could see him. For a moment we had the rising fear that we might be the next generation to be marooned on the southern tip of New Ireland.

After leaving Port Breton/Port Praslin we trawled our way northward along the coast of New Ireland fishing for travelly and mackeral (successfully). John loves fishing so that was where our interest in our history aligned with John's interest in game fishing. The slow trip north revealed village after village established on the coastline. Small canoes were launched from these as we approached. Where possible John sailed close to the shore and had his crew throw cans of coke and fanta to the kids in the boats. A nice gesture if you can ignore the unhealthy sugar hit we were offering.

As the sun began to head west we headed east towards Kokopo and arrived back about 5pm with two good mackeral and a couple of travelly stowed in the ice box. Great day. Thanks John. 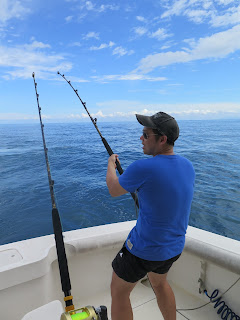