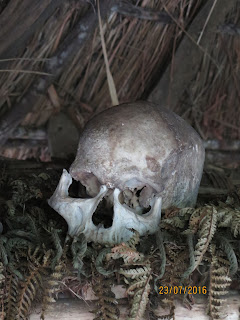 I love tokpisin. It uses English so inventivly to describe things in surprising ways.

I am a very thin man. My new friends, with some encouragement from Gabrielle took to describing me as "bon nuting' - nothing but bones, and referring to our advancing age as 'clos to yumi go pinis" - "soon we'll all die/all be finished."

Gabrielle and I are on our independent pilgrimages, hers to the Hagen of the 1970s and me to the New Ireland  of the 1880s. For each of us the journey feels as if it has some urgency.

We talked about why we  were doing this at this time of our lives. In our 60s. The second half of our 60s in fact!

Maybe, we thought, it was the last chance  we might have to visit such challenging places, such challenging and fascinating (mesmerising) aspects of our histories; maybe we were at the age when we begin to reflect on our lives and what they've meant and maybe history and family had come into a sharper focus; maybe we had realised that time was passing and there are some things that can't be put off; maybe it was a recognition that we were each at a point of transition - that time when you take stock and understand that you are entering a new phase.

We talked about that last one a bit and both had stories of critical moments in our recent lives when we became acutely aware that we were now definitely entering our third age, the final of the three ages of man. In Egyptian mythology the riddle which was posed went: " What animal walks first on four legs, then on two and finally on three legs?" Neither of us uses a walking stick just yet, so perhaps we are not quite ready for this three legged stage. In Shakespearean terms perhaps we are in our fifth of seven stages.

For each of us it had taken an incident or an experience beyond the everyday to provoke the realisation that this time was upon us. For me it had been a trip to Sicily, where in travelling with a younger travel companion I was confronted with the truth  that I would never again be the young man I imagined I still was. For Gabrielle .... well that's not for me to tell.

And where did this conversation come from? Travelling in company with a person you trust but is not your life partner can loosen the tongue and lubricate the ruminations one has about life. It was a safe time for introspection with neither of us inclined to make any assumptions about the other. We were good listeners and the highlands of PNG was far from our standard routines.

We had spent some small amount of time with the wife of our Magic Mountain host, Pym, and after relating to her our separate stories including our ages (though these were easy to fathom from the context of the stories), she made a comment which surprised me. She described us both as being "Clos to yumi go pinis," (close to the end/approaching our last days/death). Though she had included herself (even though she was much younger than either of us) I thought her commentp was a bit close to the bone, a bit presumptuous, blunt. Even misinformed. Or perhaps this stranger in a land and culture largely foreign to our own simply was saying what she saw. Maybe she spoke the truth (of course life expectency in PNG is much lower than in Australia and this may have influenced her perception of us). 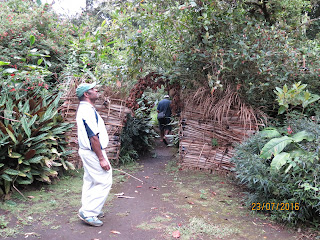 Nevertheless it hit a note which Gabrielle and I found difficult to ignore. We both agreed that getting old was inevitable but we were not quite ready to accept "Clos to yumi go pinis." That we were getting older we agreed was true, but not yet ready to die. 'How do you say that in tokpisin?' I asked Gabrielle.

'Longpela taim yet, mipela," I clumsily repeated Gabrielle's phrase. Pym laughed, though not in a way that gave me confidence he really believed it.

We came back to this conversation again and again over that week as we wound down each night. Our experience in Mt Hagen and in New Britain was an adventure neither of us had really expected to be having but we'd done it without incident, without trauma and with energy and the wisdom of years of travel. We both felt excited by our time in PNG and satisfied in having made this choice which had carried an element of risk when we were contemplating the trip. Now we felt emboldened; confident that these adventures were not beyond us and that perhaps the third age had the potential to be every bit as exciting and fresh as the first and second ages when we were learning about life through a constant diet of new experiences.

I came home with a spring in my step and keen to plan the next adventure. 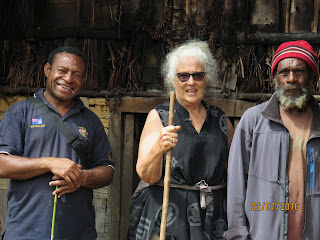