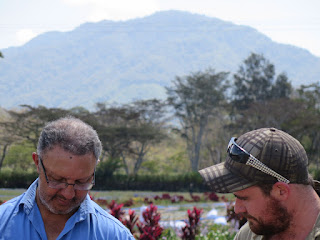 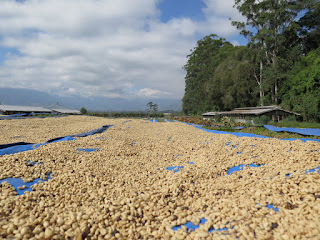 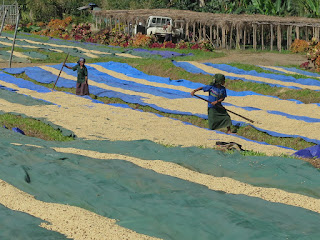 We spent the day with Brian Leahy whose father, Danny, Gabrielle had known in the 1970s. Danny Leahy was the first white man to arrive in the highlands in 1933 at the age of 21. He was a young Irish lad trying to survive during the depression and heard there were opportunities in PNG. There were rumours of gold in the hills and somehow Danny found his way here with his brother. They  had walked from Port Moresby. There was enough gold to encourage them to stay and he took to the place and began a series of ventures, early coffee plantations among them. He took two highland wives and had 10 children by them. Brian would have been a youngster of about 10 when Gabrielle was here. In fact he would only have been here in school holidays as he was at boarding school at Nudgee College in Brisbane in those years. A series of documentary films was made in the 80s which told the story. Look for "First Contact" or google Danny Leahy.

Brian's mother is a tribal woman and therefore, as a mixed race man, he has the challenge of navigating two families and all the complications associated with that. The most recent challenge was organising the funeral of his older brother who died a year ago. He has played a leadership role in his family and so had the task of navigating the expectations of both immediate family and the traditional village tribe from which his brother's mother came. No easy task.

There were angry scenes, demands and even subtle threats all of which revolved around local protocols and, in Brian's assessment, money. His solution: stand firm and face down those who were not immediate family; make it clear that gifts of money and pigs were not required; and insist the service would be held in Hagen, not the village. Most importantly he found ways to weave traditional rituals throughout the week of mourning. Each day involved mourning and crying rituals. On the final day Brian had arranged for all the mourners to have equal status by insisting that they all come through the same entrance to the open area where the service was to take place and, and this is quite amazing, when the tribal group entered and began their traditional crying and mourning ritual, the white educated guests and members of the family found themselves carried along in that same expression of grief. Brian, a big man, a rugby player, a strong man, said he experienced a cartharsis unlike anything he had experienced before. He said he felt cleansed and was close to tears again as he shared this story with us.

At the end of the week even the angry village relatives congratulated him on how moving and significant the whole thing had been. They had ignored his bar on gifts and had brought money and 60 pigs which Brian immediately handed over to the tribal family thereby avoiding all the complex reciprocal expectations which exchange of gifts involve.