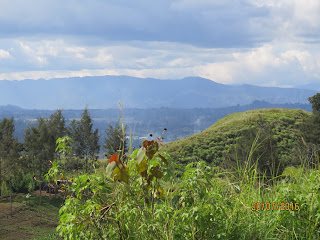 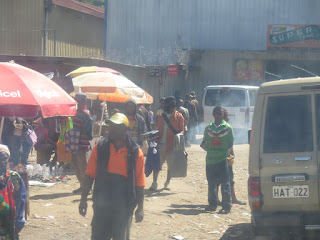 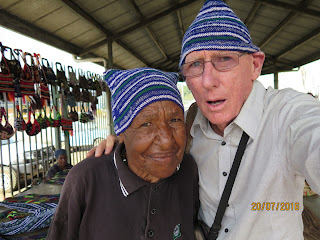 Gabrielle and I are in Mt Hagen after a disrupted day of flying which saw us sit in the Rabaul Airport terminal for 8 hours and Mick miss his flight to Brisbane.

Mt Hagen seemed like the wild west after sedate Kokopo (though Kokopo itself felt a bit challenging when we arrived a week ago). I often think of Beirut when I feel overwhelmed by chaos and decay (though I've never been there), but Hagen sets its own standard. The roads appear tp have been bombed so large are the potholes, the town is heaving with people none of whom appear to have homes - so many are there on the streets, hanging by the roadside, sitting in open spaces, selling meagre amounts of produce or betel nut on plastic mats by the roadside; the buildings mostly appear to be war surplus and about that old (though only built relatively recently) and everything is coated in a thick layer of dust. It felt threatening. A feral shanty town.

Last night the advice from our hosts at the Mt Hagen Missionary Home (we're travelling as fake missionaries) was a little unsettling. Yes its safe but not at night and not beyond the city centre and make sure you walk confidently, don't look lost or confused and always keep your guard up etc etc. We felt our confidence sapping.

This morning we got the driver at the accomodation to drop us in the town centre which turned out to be one block away. We got out and looked confused and were immediately approached by people not out to rob us but to help. We had a coffee, began to relax and went looking for the house where Gabrielle lived in the 1970s. Gabrielle didn't recognise the surroundings but a couple of blocks from the centre and there it was. Again we looked lost and a group of about ten people came to our aid, one of whom then spent the next three hours shepherding us around town and giving us a tour of the market. We'll see Anna again we hope.

Hagen is the food bowl of PNG so fresh produce was there in abundance along with hand made bilums and traditional bush string cloth and clothing.

We're feeling much more comfortable. Gabrielle has made friends with almost every trader in the market and along the street by taking their photos and we're chasing a couple of contacts we have from Australia. The accomodation is good; we're well and it all feels pretty positive.