A Tale of Two Towns 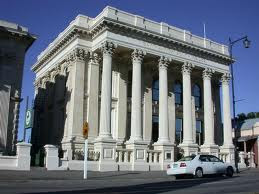 Gotta get this New Zealand experience out of my head so I can move on. My head has been asking to move on since I returned on January 25 but returning to "normal life" has proved a little challenging. I returned to rain and humidity, an unemployed wife and a routine and a rythym from 2011 that I'd lost. It's slowly returning, as is the drive to write. The following posts will be a truncated version of my final week in New Zealand. First a short version of being taken by surprise by unassuming villages in remore places.

Two things caught my attention as I drove into Hokitika on the west coast of New Zealand's South Island. The first was the wide deserted streets, a great setting for a western; the second was the billboard advertising the Whitebait Exhibition at the local museum, extended by popular demand! Let's face it, on first encounter Hokitika was charmless. I was happy we'd only booked one nights accomodation.

On the other side of the island ten days later I had a similar experience. Oamaru had one wide main street running dead straight for about two kilometres flanked by nondescript shops and motels hired in from "allthesameland". I was devastated; I had booked us here for two nights and what had been hyped as New Zealand's largest intact Victorian Precinct looked as if it had the potential to flip me into an instant and deep state of depression. My spirits, buoyed by three weeks of New Zealand delights, were going to be tested.
Hokitika and Oamaru shared a similar history though divided by an inpenetrable set of glacial ranges.

In both cases I was guilty of being victim to my instant emotional responses, first impressionism. If they were people I had met for the first time I was making a judgement based on the shallowest of evidence. One meeting, no conversation and on a day when we were both a little tired. My response: Boring, gormless, stupid, a waste of space; Don't want to get to know you; I'll be gone in the morning. I counsel my children on the need to give people a little space. Spend some time with them, let their personality and values emerge. I had committed this very offence. 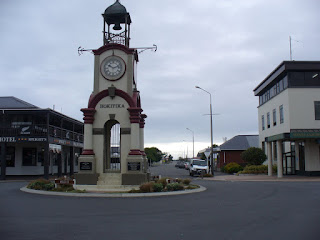 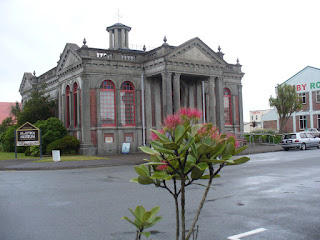 Hokitika was born of gold fever, Oamaru of a massivly fertile hinterland suitable for grain and sheep production. Each town, ,being completely in love with itself, built a series of public buildings of beauty and grandeur. Hokitika was a little less ambitious than its sister and was satisfied with a couple of buildings in the British public building style constructed from local granite. The rest of the town consisted largely of buildings in local timber and being a gold mining community they concentrated on building pubs - 102 in fact, 84 of them in a mile long street serving a thirsty population of five thousand. And then the gold ran out.

In Oamaru the bounty seemed endless. Grain and sheep don't deplete themselves so the investors were confident of their future. In addition, the nearby cliffs contained readily available building material and so to display confidence in their wealth they built an impressive precinct of beautiful classical sandstone buildings.

Here's a list of the highlights. Remember this is 1870/80 in the back blocks of an emerging colonial country: a five story administrative centre, a giant two story grain warehouse, three two story bank buildings fronted by soaring Greek columns, a massive wool store and to top it all off, an opera house with seating for five hundred. And then came the 1890 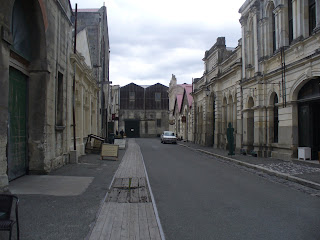 grain prices and the emergence of deeper draft steam ships as the preferred mode of transport. Almost overnight the shallow harbour was abandoned and the export trade deserted Oamaru; the town, in an attempt to block out the pain turned its back on the sandstone precinct and moved its centre half a kilometre north and survived as a secondary regional centre humbled by its experience. The buildings cover two town blocks and due to neglect and their sturdy construction are largely intact. All these first impressions took a mere two hours in each place.

The next day dawned fine in each town and having committed to two nights in Oamaru I decided to give the place a second chance. Surely there must be more than a deep sense of decay here. Hokitika was only two hours drive from our next destination so with some trepidation we checked out of our motel and set off to walk the town and visit the intruiging and self proclaimed blockbuster 'White Bait Exhibition'.

I am pleased to report that in both cases my first impressions were confounded. The secret in Hokitika was the people and the Whitebait. The people, because the locals loved the place and had a strong sense of purpose and confidence in their future. After gold came jade and the town now sports more jade outlets than Beijing. We met a woman who runs a shop called 'sock world'.

She has collected and restored a collection of 100 year old sock making machines and when we were there she had her local mechanic tweaking a tension-screw here and giving a gentle oiling to ancient parts there, and she was happy as a pig in mud. 'Do you make many sales?' I asked knowing the answer was going to be 'no, its a hobby'. I was wrong. She ships socks all over New Zealand and sells them at $35 a pair. 'And people buy them?' 'Too right'.

Another couple, she a born and bred local, he, a blow-in artist, gold miner and whitebaiter had bought one of the pubs and lived and worked in it complete with the original 1880 counter and strong room. They're survivors, digging, panning, whitebaiting in between commissions for his quite sophisticated copper art.

And the whitebait? That's a whole story in itself but, as with gold it's a boom and bust business. Once there was a lot of fish and everyone wanted a piece of the action and pretty quickly they fished out the original northern alpine rivers. So they moved on to the next river and so on. Luckily the southern rivers were so remote that before the hunters could ruin the whole industry the government had begun to regulate things. An example: these days you have to buy a licence; you can only fish by hand - scoop nets of a regulated size and you can't be more than 10 metres from your net at any time. Also outlawed are the building of groynes out into the river to force the fish into the nets. They only run each year for a short time and it's on for young and old. Its not a season without a few fights over bank space. Its an obsession for the committed. And an identity for Hokitika.

Meanwhile back in Oamaru I've read the brochures in my motel room and we venture out. Everything isn't cheap and tacky Victoriana it turns out. There is an excellent Regional Gallery in one of the restored bank buildings; the 10 million dollar refurbishment of the Opera House has created a sumptuous modern facility - new life to a sadly neglected first lady of the town; the local botanical gardens are delightful and the shock of the day - Oamaru turns out to have a thriving underground art movement - post punk combined with 19th Century aesthetics. Oamaru claims to be the "Steam Punk Capital of New Zealand". It's an international art movement and it's thriving in a faded heritage town in the backblocks of the southern hemisphere. I was gobsmacked.

I celebrated by getting a haircut in the new end of town - $15 NZ. A southern hemisphere bargain. 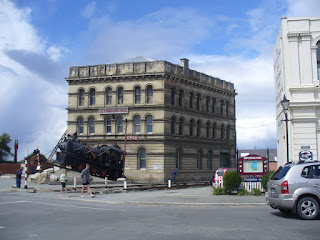 Once a five story building. Now the three story HQ of the Oamaru Steam Punk movement. What's that train doing?
Posted by little hat at 18:34

I counsel writing students to honour their emotional responses. So I take issue with your guilt of being "victim" to such.

Having said that, I'm really glad your impressions were confounded. You were willing to SEE. So glad you did. Loved the story Steve.