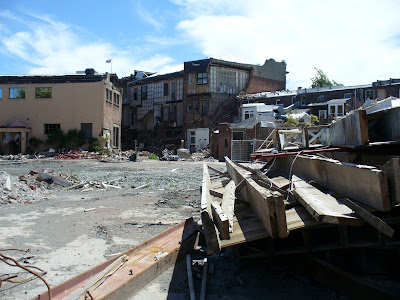 In the queue to check my bags in at Brisbane airport a young lad from New Zealand turned to me looking confused. In his clipped New Zealand vowels he said' Um I un the right pluce?' 'I wus supposed to be un thus flight bet the numbers don't mutch.' I was able to help. In our modern competitive world Air New Zealand was the carrier for the discount Pacific Blue mob. 'in my broad Australiain vowels I reassured him 'Yer in the roight place mate. No worries.' 'Where're you frum?' 'Christchurch' he replied. 'Jest been vusiting sum mates fur a wik.'

'How did you fare in the earthquake?' I asked observing that the city had just been hit by another big one on christmas eve as I was thinking about packing. 'Yeah, alright eh? My house is looking a bit the worse for weir but it'll be alright eh? I'll hafta move inta a motel for a while but the govenmentuis paying for the wirk.' He seemed very philosophical. I discovered that by worse for wear he meant that his house was sitting at a 45 degree angle having been tipped off its stumps. 'Sum people got hut real bad though eh?. On the coast there's houses where half is at the top and half at the buttom of the cluff eh?' 'I was lucky.''

We chatted on as the line inched forward. 'You jest get on wuth it eh? We get a few shudders now und then but mostly it's alrighteh.' I discovered later that Christchurch has had more than 7000 tremors in the past twelve months since the first big one in November 2010.

'How long are you in christchurch?' One night was our answer. We had planned to get out of the earthquake zone as quickly as possible. He seemed disappointed. 'You should have a wee look before you go. I could drive you around if you like.' Reluctantly we declined. We'd booked all
our accomodation in advance and would need to head off first thing next morning for Kaikoura. 'Too bad,' he said.'It's worth a look to see what it's like now. They've set up a new shopping precinct using shupping containers. It's not too bad.'

Next morning, after a fitful night's sleep at the Airport Motel where every plane landing or taking off woke us alert to the posibility of the need to evacuate at short notice we did go for a drive to the city centre. It was New year's Day so the traffic was light but even so there was an air of absence, of people of traffic of vitality. Everyone in the centre was a tourist come to look. the heart of the city was locked down. wire fences blocked what woulod normally have been main entrance points; vacant lots were more common than standing structures; the me3ss had been cleaned up but the effect was to create a ghostly environment whre everything seemed to be on hold, waiting.

Strangely, while the heart of the physical centre had been destroyed the resilience of the locals seemed to live on. People were carrying on about their normal lives; dogs barked, kids rode their bikes the suburbs, largely untouched, hummed with quiet life. Later on we begin to meet refugees from the stress; people who had taken a weeks holiday to escape the ongoping trembles, the daily expectation that the next one could be the really big one; three major earthquakes in 12 months and over seven thousand minor quakes in one year - the nights are the worst.

Last night we went to see a documentary at the Picton Cinema, "The Fall of a City", which captures the past 12 months in Christchurch. It's quite beautiful in a strange way; full of hope and wisdom and community spirit. I left the cinema both exhausted and exhilarated.

My downstairs neighbours here in London are a young Kiwi couple. I was chatting with the husband the other day - "That place is shut" he said ... it took me a couple of seconds to realise he didn't mean it was closed.

The Kiwis I know are generally affable, down to earth people - if anyone can cope with earthquakes they can!

Steve, if you are anywhere near Moeraki (just north of Dunedin)you have to make the detour for lunch or dinner at Fleur's Place, by the wharf on the point - wild southern ocean, fabulous chowder or shellfish hotpot, the catch straight off the trawler up the ramp onto the cleaning table then into the kitchen.

Thanks Gerard. It's gone into my itinerary. That will be one of the last stops of the trip. Hello to Lyn and the boys. (I hear you may be leaving WEST END?)

It's all beyond my comprehension, but I am regularly thankful that earthquakes are not reality for me. We experienced a small one (from where we sat) last year, and true fright came from somewhere deep in my consciousness, even though it amounted for us, some trembling for a minute or so.