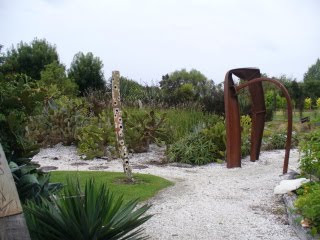 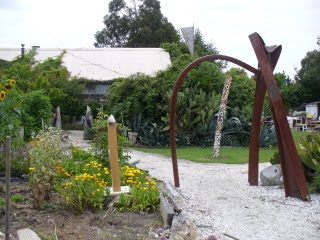 Barry Lopez has a story in his book "About This Life" which recounts his year experiencing the community of potters in the wilds of Oregon who use an ancient firing technique called 'anagama'. It's a Japanese wood firing process which takes between three and six days. The Japanese seek to make the process as controlled as possible while the lead potter in Lopez's story values the wildness and unnpredictability of the same fire.

I was reading this as we made our way north from Christchurch . In Picton I picked up a brochure on the potters of the Nelson area, our next stopping point. There were more than twenty listed. I was aware that the Nelson area was home to numerous craftsmen and women.

My interest was ceramics. My partner was more inclined to the jewellers. So it was no surprise that when we saw a sign on the Picton-Nelson road telling us a potter and a jeweller were located on a local back road we took the turn-off.

The pottery was closed but a short distance further we pulled up outside a charming house overlooking one of the waterways, part of the Marlborough Sounds, the shoreline of which the road was following.

We stepped from the car and were met by Verena. She was Swiss, having arrived in NZ some twenty years previously. she'd met a Kiwi and stayed. An eighty's backpacker who never went home. Today she would be politely but firmly asked to leave - no job, no skills, no future.

Her jewellery was simple but had the hallmarks of craft made with love rather than driven by the market.

Andrea browsed, I talked, and the more interest Andrea showed in the jewellery the more the conversation flowed. 'What other artists would you recommend in the Nelson area?' I asked. 'What are you interested in?' she replied. It was then I remembered the brochure in the car. 'We have quite different tastes, Andrea likes fine work , I like chunky tough stuff'.' 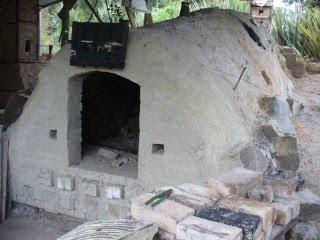 She looked through the brohure and circled three or four studios and galleries one, in particular, she drew my attention to. 'This might interest you, Darryl Frost, he fires his raku ware in a wood fired kiln. An anagama kiln' she added.

Ninety dollars and a quirky pearl necklace laterVerena bad us farewell reminding us to say hi to Darryl if we looked him up. I was hooked. Andrea was less enthusiastic. She thought his work looked like he'd thrown it at the wall and let fate decide the outcome. 'I would not want that in my house'. She was adamant.

In Nelson I found that his studio was an hour out of town on a peninsula off the main road. It was out of the way, Andrea was the navigator, and I resigned myself to reality. quietly storing Darryl as an opportunity missed in my mental journal.

Maybe Verena was on my shoulder guiding me because I was unconsciously being lead step by step closer to Darryl's lair. That afternoon we took a drive to Rabbit Island - neither the wild beach nor the bird filled forest the guidebook enthused about; rather, a windswept muddy beach backed by an ugly pine plantation. Andrea, still navigating, suggested we travel a few ks further to Mapua, a small seaside village with a wharf area, a former cold store and fish maket, an apple store and a harbourmaster's building converted into cafes and gallery spaces.

Darryl's work was at the far end of the "Cool Store Gallery". There were only a few pieces and the proprietor seemed bemused when I asked if she had any more. When I asked about him she was not flattering. 'He'll give you an interesting time if you find him' she said dismissing me. Andrea was even less impressed when confronted by these rough pieces in the flesh. I hinted that his studio was only twenty minutes up the road but to no avail.

Barry Lopez used the anagama story to explore the idea of community and humanity in its simplest and most grounded form. I was beginning to think that my anagama experience was the opposite. The anagama was not bringing people together but generating tension and distress. I needed to be a little more zen and let my desires go; allow my experience to be in the moment, not find every opportunity to feel thwarted.

Relaxed I can be; zen I am struggling with. Later the next day, after a nine hour day of driving, walking a ten kilometre section of the Abel Tasman (National Park) track and three hours at sea, some in a strong northerly swell aboard a small boat (Andrea suffers from sea sickness), we headed home to Nelson.

A sign that Andrea had regained her land legs came half way on the return journey when she suggested we stop briefly at a local art and craft shop. It was pretty awful but it did give me an opportunity to have a quick glance at the map to discover that serendipity was on my side. Kina Beach, Darryl's hideaway, was close by.

'Do you mind if we just do a quick side trip to Kina Beach?' I asked gently. Andrea was exhausted. I was in luck. Her energy for resistance had expended itself. 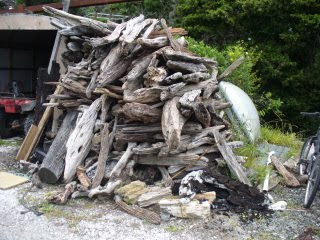 Darryl's byline is "Playing with Fire". I pulled into his entrance drive and followed it fifty metres to a point where it petered out in a scattering of junk and the remains of old machinery and timber offcuts. Andrea setttled into her seat for a snooze. 'Won't be long.' I said.

A piece of ceramic art slumped over a metal frame formed a letterbox and signage to the entrance. Twenty metres beyond that I entered an open space. On the left was a door to a studio crammed with art pieces. Straight ahead was a series of large sculptures. and behind all this lay the mysterious ten metre long 'anagama' kiln. Darryl was nowhere to be seen. The door to the studio was open. I entered to find myself surrounded by a hundred ceramic sculptures, some two dimentional, most three and all apparemntly inspired by nature and organic forms. Each one exhibited the furious energy of a man possessed of a will to wrestle with his medium in the most physical way imaginable; a series of giant pieces of ceramic art, many of them combined with recycled timber or steel or boulders were located around a large area where pathways wound through a wild garden.

About half an hour later I re-entered the studio. I was intent on a purchase. I selected a semi-functional piece hoping that it might find a comfortable place in the household. Still, there was no sign of Darryl. I gave a blast on his air-horn as suggested at the door; I considered leaving sixty dollars but was unsure of my ability to make a reasonable estimate of its value. Eventually I wrote a note leaving my email address and headed for the car empty handed.

Andrea groaned and surfaced as I opened the door. My ten minutes had turned into an hour. At that moment a tractor roared up the drive and a balding man jumped from the saddle. I met him mid-stride and followed him. I pointed to the piece I had chosen and, to my embarrassment, discovered it was one of only half a dozen in the room which was not Darryl's. He was happy to sell it for his anagama colleague for fifty bucks but I was determined to possess part of Darryl. It was an awkward moment. I had hoped that my anagama connection with the artist would flow; that we would click; that he would invite me to inspect his kiln; that we would discuss the finer points of his artistic vision and that the communal experience of the anagama firing; of spending six days and nights together stoking the kiln with small mountains of forest timber and driftwood would somehow be seamlessly imparted to me through some mysterious and magical process.

I chose a Darryl piece, a mashed up vase form with lumps and cuts and furrows and unexpected colourings intending to buy both his and his mate's as a package; Sadly, when I put them side by side his mate's looked like a poor cousin. I put the cousin aside. 'A hundred dollars for my piece' said Darryl. And that was that.

or some reason I slid it behind the back seat as I got back into the car, out of Andrea's sight.

'Did you buy something?' Andrea asked when we got back to our motel. I looked sheepish and began to unwrap my monster. 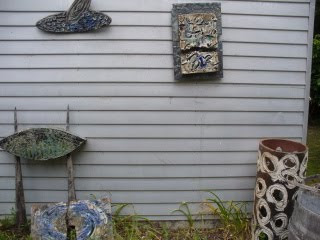 I have an arty niece who lives in Nelson - she paints, and writes - now I can see why she might like living there! :)

My partner and I have completely different tastes -could be becuase I am an artist and he is a musician! We have separate 'studios' in our house, he gets to furnish his with his own selections and I with mine, so that way my delicate aesthetic sensibilities are not offended. (That's a joke, I have a disparate collection of items which includes a full human skeleton and a selection of Barbie dolls)

Seems to work. There are some things you don't really need to compromise on.

Jinksy,
You should visit her. it's a lovely little city - full of life and art and good coffee.

MF,
Your comments about separate studios or splitting the house in wo have been considered by us. At this stage we seem to tolerate our differing aesthetics and maybe even are enrihed by them - andrea may not agree!

We do compromise on a lot of other things.....and have learnt a lot from each other.

Love the quest story! But what, no part 2? How is one supposed to take sides if one can't see the piece!