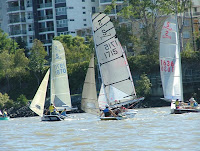 I am a tragic sailor. As opposed to a sailing tragic.

My brother and I started sailing in our mid forties when my daughter was looking for a hobby that would define her as 'not being in the shadow of her younger brother'. This has been a fabulous success as she is still sailing 15 years later and has become an accomplished skipper and sailing instructor. Her brother found the rigging and the waiting for the winds to arrive all too slow and boring. He preferred to chase balls. Sailing was a good choice.

As often as we are available on a Saturday we ageing siblings hitch the boat to the back of the car and drag it the 850 metres from my house to the riverside clubhouse. Our boat is almost as old as us. It's a 30 year old 14 foot dinghy with timber deck, timber mast. timber boom, a fibreglas hull and sails that were made in the 70's. It's old technology. There's not a sniff of carbon fibre on board.

The boats we compete against are incredibly light and float on top of the water while ours more wallows in the water. Theirs have aluminium masts and sails made from from fibres developed by NASA to help navigate to the distant shores of our galaxy. 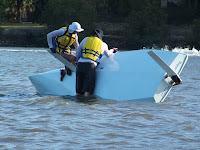 Every week we come last. Except this week. And herein lies the double triumph.

We beat a boat home by almost a lap. We were pretty excited. Triumph number one - champagne all round.

It wasn't until we queried who was skippering the boat we had vanquished that our triumph was put into perspective. It turns out that the other boat was skippered by a bloke with a visual impairment. Now his feat too is something to celebrate. Quite remarkable really. Our club has a policy of supporting people with disabilities but this was quite special. It turned out that one of our gun sailors had chosen to act as crew for the day and was talking his partially blind skipper through the three lap course. The river was crawling with pleasure cruisers, high speed ferries and we were all battling a strong incoming tide.

We zig-zagged from bank to bank, struggled with the current around the top mark, nearly got collected by a CityCat ferry and managed to stay upright - but we couldn't shake off our nearest rival for that plumb spot at the tail of the fleet. We felt fully satisfied with our effort. Our legs told us we had worked hard for over two hours. And we had the advantage of all five senses.

The wonderful thing about sailing is being so close to nature. Your senses are your guide to every decision and the visual cues are incredibly important. The change in the surface of the water heralds an approaching gust which the skipper must take advantage of. The piece of wool flying from the sidestay tells you the direction of the breeze and where you need to be pointing. There is no time to lose concentration. On a good day it's magnificent; on a bad day it's miserable but still memorable. Do it with your eyes half closed? No thanks.

I have often wondered what the lack of one sense does to the others. I imagine that our arch rival has a fine sense of the wind across his cheeks and hence of wind direction and a heightened sense of motion and balance. Perhaps I should sail with a blindfold. I might learn something.

Theirs was the true triumph. We need to share that bottle of champagne.

Lovely jubely about having to share the champers. A little bit jealous of your sailing saturdays.

BS. You ARE a 'sailing tragic'!
Anyone who with malice and forethought keeps sailing in a craft using technology last current when the Ark was on the slips wants to come last! Love your short lived feeling of triumph... reminds me of a similar story. Will post so you feel not quite so lonely in your hubris! Ha ha!