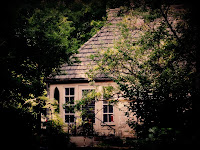 Wistful, dreamy, picture book homes exist.
Slate roofed, cream brick, vine covered
set in large estates
with huge dogs loping across expansive lawns.
I know.
I've driven past them.
They sit in suburbs on hills with views of the city.
Highgate in London, Ascot in Brisbane, Potts Point in Sydney.
I'm not envious.
I'm just more aligned to other planets.
And other lives.

I drive through the poorer suburbs
and wonder at their lives.
I see small houses on small lots.
Fibro, corrugated iron, champerboard.
The yards are sometimes bare.
They're rentals or housing commission.
Some of them are unkempt
but many are proudly neat and loved.
There's an honesty about these suburbs.
A lack of pretension.
I grow to like that about them.

Today I'm visiting a youth centre in one of these areas. I'm in the simple kitchen of this simple youth facility making myself a cup of tea. I'm not familiar with the place so I'm searching for the tea bags and the mugs and the sugar. I open every cupboard and drawer. All the time I'm doing this I notice out of the corner of my eye these three African boys sitting together on the floor. There's no one else here except for the three staff members and myself. It's 11am and all the local kids are at school or hiding at local skate parks or in the bush on their bikes. They don't turn up here if their wagging school. But here are these three looking very comfortable. They look about 16 and maybe school age but Jeff, who's in charge, doesn't make any comment. 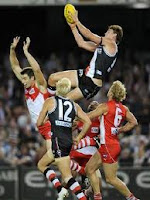 After a while I wander over towards them. They're sitting in the far corner of the activity space and they're playing a game on the TV. A Playstation game I guess. They are totally engrossed and calling to the screen as they compete against each other.
There's been a lot of tension in the local suburbs lately. In the past few years increasing numbers of African migrants and refugees have arrived and settled here. The locals don't like the way they hang around the street and gather in groups in parks. They're too different. They've come from refugee camps where home has been a cardboard box or a sheet of iron held up by four posts or, if they're lucky, a tent with sides.
Now here they are in Australia. Their housing commission home is luxury. And here they are playing and feeling safe. I step a bit closer to see what game they're playing. I'm looking for a way in. I want to make contact. They're playing a ball game, but it's not their native game. It's not soccer. I hear one of them call to his player on the screen 'MARK!' It's a term I'm familiar with. I look more closely. My whole body bursts into a smile. An athletic figure wearing the colours of my favourite team, the Brisbane Lions, soars into the air to take a beautiful high catch. A mark. 'Do you like that game?' I ask. 'Yeah, its good' they say and turn back to the game to send their players scrambling for the ball. To take that mark and kick a long low drop punt towards the goals.

They're playing Australian Rules Football. Aussie Rules. The iconic Australian game which obsesses the nation. If only their neighbours knew. Aussie Rules could change the world!


For more writing on this theme visit Magpie tales. Click on the Magpie Stamp

Nice story...I love sports..I think they are so good for young people and older people too..I watch all of them...bkm

sometimes sports is the way to get everyone on the same playing field, if you catch my drift.

in the end not so much different eh? kinda glad this ended well as too many imigrant stories do not...a nice magpie....

I love the contrast you show in your poem. Excellent! Excellent tale about the Aussie football, too.

well done this story. I enjoyed it!

I get more aligned to other planets too Steve. Maybe because there are certain stories there that make your whole body burst into a smile.

I'm glad you found a link - hopefully the first of many. It should be what this life is all about - links and similarities, not diferences and divisions...

great poem, i really enjoyed reading the post too.

... a lack of pretension. I like that too. Very nicely written!