Election Party. Girls to the left - Boys to the right 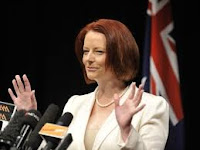 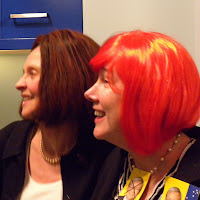 Australia has finished voting in the election from hell.
The result: stalemate
Neither party has a majority or a clear mandate.
The Independants who will hold the balance of power are behaving with remarkable dignity and good sense.
Julia Gillard is the incumbent so holds a few cards in her hand. And she has red hair - that has to count for something.
Tony Abbott is resorting to schoolboy tantrums, refusing to accept that perhaps he won't get his way.
Stephen Fielding (Family First Party-super conservative) is having a cry in the corner because everyone is ignoring him and he's threatening to shit in the sandpit to spoil everyone's fun. 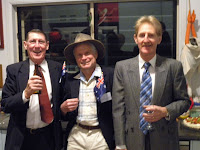 The Greens, who will control the upper house from July 2011, are sitting back, smiling like the cat what got the cream, and watching everyone else tear themselves to pieces.
Barnarby Joyce (National Party - conservative rural) is threatening to king-hit some of his former colleagues who are now independents (augurs well for a stable coalition of the right when Barnaby is that unstable already).

And us, the nation. we watch in fascination or ignore and yawn.

Only real joy of late has been taking the piss at election parties where every politician was fair game. Ours featured two Julia Gilliards (pick the real one?) and three men of little note from the right. Can you name any of them. Clues? Left to right: The invisible man; the cockeyed country man, the anti abortion/anti gay man.

Prize for the nearest correct entry: A copy of my remaindered book "Challenging the Centre- Two Decades of Political Theatre in Queensland" mailed anywhere in the world.
Posted by little hat at 11:44

If I lived at Bingara I would remain anonymous too! But whoever you are, keep up the good (subversive) work!

Steve, I am really pissed off that I was not at your party. But as I said to she who must be obeyed, Loani somebody, we are sure to be back again in a couple of months... another party? A that!

And another thing! My little limerick was not meant to have any double meanings. As Greenbottle used to say: "How could you say such a thing!"