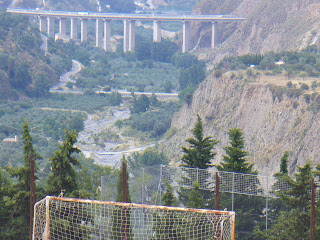 The knot in my stomach sends me a message. It’s in Spanish so it’s a little tricky to comprehend but after translation it tells me three things. One – get moving; two – there are hidden treasures here and three – write about this and you’ll put the whole experience in perspective.

I know one is correct, two I’m skeptical about and three I adopt as my survival mechanism.

We search through a basketful of brochures and maps previous visitors have left in the cottage. There are maps of the major local villages, Durcal, Padul, Lanjaron but none of Niguelas or the local valley. We’re looking for a map of the Valle de Lecrin.

To the Moors it was the Vale of Happiness. That gives me some hope. It must have some charm for it to earn that moniker over the eight centuries that the African colonists reigned supreme. My knowledge of the Moors is limited but I am in awe of their sense of design which is evident everywhere in Portugal and southern Spain. These Berbers and African Muslims called the Iberian Peninsular - Al-Andalus. Their legacy is present in almost every building from local houses to palaces. 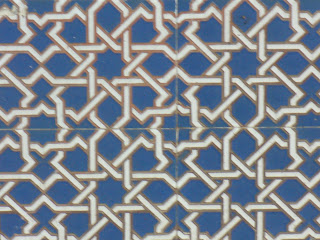 Their decorative tile work, their archways, their insistence on simplicity in external design and surprisingly sumptuous interiors including the ever-present inner courtyard create a wonderful consistency across the region. The constraint which their religion imposed, dictating the absence of figurative representation has reesulted in extensive use of geometric patterns. Abstract motifs abound from relief carving referencing the Koran to patterned tile work which transcends expectations and sometimes covers every available surface . I’m hoping that the ‘Happiness’ label would not have been applied lightly.

The best map we can find is thirty six years out of date. 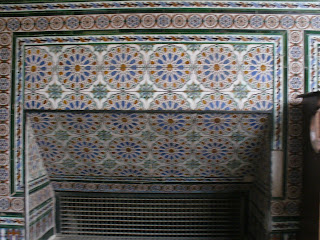 It’s a topographical map of the valley printed in 1974. The motorway is absent and in its place is the A323 which still runs between Motril on the Mediterranean Coast and Granada but is only used by local traffic. All the villages in the area are marked but many of the connecting roads are absent – the only thing missing from 1974 are the donkey trails. On the positive side it is beautiful map showing details which, for walkers ,would be invaluable.

With this as our guide we set out on our day of discovery. The first challenge is finding our way out of the village. It feels like we are in some weird kind of fish trap where getting in is possible but exit much more difficult. We’ve managed to navigate our way from Lisbon via Southern Portugal to Seville and Granada all of which has been a challenge but to be completely mystified by the entrance and exit of a village of 1000 people feels humiliating.

The previous evening had been doubly humiliating as we sought to find the local Supermarche which our host Hermy assured us was down the road, turn right then left, through the tunnel under the A323 and follow that road for about half a kilometer. “You can’t miss it”. It’s as simple as ABC I told the team after getting off the phone to Hermy. We managed to explore the rest of the alphabet in discovering that down and right included a series of dirt slip roads running beside the A323, more than one tunnel and a number of No Entry signs. We did find the Supermarche, which was a good one but slipped up on the return journey and found ourselves unintentionally returning to Granada via the roundabout which had misled us on the way in. We got to know that roundabout very well over the next fortnight , at times circling it twice or three times seeking the correct exit.

As a result we were a little apprehensive about our first day trip. The A323 took us past the false entrance to Niguelas and followed the curves and contours of our map as if by magic. It seemed to be following an ancient line of least resistance no doubt influenced by the wisdom of millennia of donkey paths. From Niguelas to the village of Lecrin, two minutes as the crow flies, took us a delightful ten minutes as we wound our way down into a gorge bypassing the tiny village of Acequias, Niguelas’ nearest neighbor, and passing below the overwhelming monster bridge carrying the Autovia (motorway). The A44 bridged the deep river valley in one giant stride.
The landscape was harsh and stony with high cuttings of unstable pebbled cliffs threatening to collapse across our path as we crept cautiously through terraced hillsides planted with row after row of silver-grey olive trees. Our plan was to explore the series of villages in the Valle de Lecrin both to orient ourselves and to become absorbed in the local environment.
Posted by little hat at 11:31

As someone who could get lost climbing out of a paper bag, I must say, I kind of enjoyed the "lost" bit. Sorry. :-)

But the subsequent journey sounds wonderful, looking forward to more!