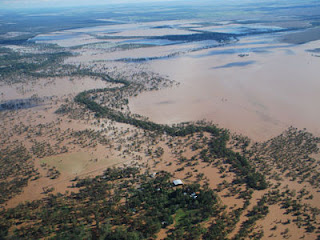 I'm aching in unexpected places this week. I've been digging and planting.
It's been raining for almost two weeks straight here in SE Queensland. It's been wonderful. The dams, which 18 months ago were down to 14% capacity, are now 97% full. An unprecedented level.

The western desert areas of the state are overflowing with record flood heights - 14 metres of water flowing through what were, a month ago, dry creek beds.
When the floods subside the land will bloom again. Desert will become pasture, cotton farmers will have their irrigation supplies replenished.


Cubby Station, 93 000 hectares of farmland, which captures the equiv 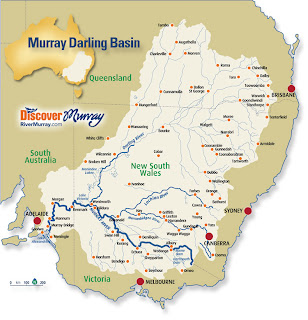 alent of Sydney Harbour in its man made catchment system will be in business again. Cubby station, a miracle of design? Some would argue a disaster of design - intervention in the natural system on a massive scale to the detriment of the larger environment. In this case preventing huge waterflows from arriving at downstream wetland destinations. Luckily this time there are multiple Sydney Harbours on offer.
This ocean of water will now travel its long journey to the Southern Ocean finally reaching its destination in three months. The mighty Murray River, part of Australia's largest river system, will receive water it has been denied over the past decade and will flow to the ocean again. This is the system which gave rise to the belief that Australia had a huge inland sea because many of these rivers appeared to flow west, away from the ocean. Early explorers didn't have the benefit of Google Earth and aerial photography.

Back in my backyard things are going wild. I gave myself a simple task. Plant the kaffir lime tree given to me for my bithday over a month ago. Being a distractable person i turned this 20 minute exercise into four hours of pruning, climbing, digging, planting, poisoning and inspecting. I used tools which thought they'd been retired permanently to the tool room, forgot to have lunch and finally collapsed having created a new list of things to do way longer than the original. 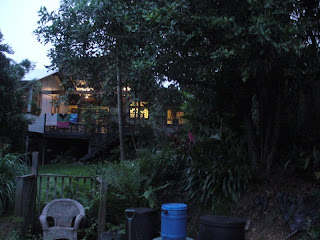 Looking back. The view the kaffir lime tree has of me.

The rain has been lovely! Our little rain forest, that is our backyard, is once alive & lush once more.

Hope your aching bits get well soon so you can carry on with being a seriously earnest gardening-person.

Good to see you on Saturday...sorry for interrupting the all essential weekend siesta....love the lime tree point of view :)

I used to get similarly distracted in my garden. I don't have a garden anymore, and what I wouldn't do for those aching bones of yours.

Wow! It looks lush back there!

What an interesting story of redemption this was. We too have suffered a drought and this year brought rain enough to fill the reservoirs and grow the grass two feet high. I live in the woodlands of central coastal California. The rain, the sound and effect of it, was the subject of several of my posts in February.
Yesterday, I visited an eye surgeon with my cataract-suffering mother. He was a highly accented guy from India. As we spoke about performing surgery on a patient with dementia, he suddenly asked me, "Where are you from?" I told him I was a California native. He said I have an accent, rather like an Australian. I was floored and even a little pleased. The accent of Australia is very beautiful.
I'll be back to visit you.