We got the Sea. 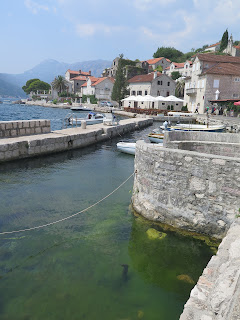 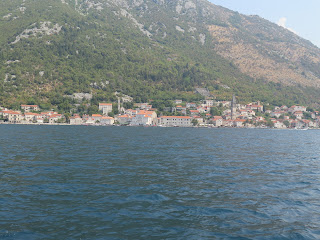 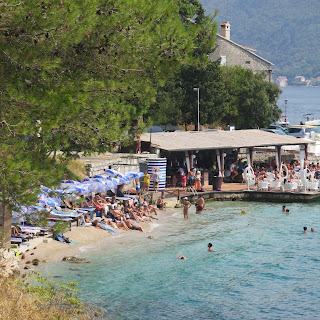 Ekscus mi. One euro, ples.
What's in there?
Ther are two rms. One wth precious objicts and the other wth church vestments. Hnd made and stitchd.
I hand over my coins and she adds:
Also you vil see the church which is began in 19th century, but run out of money and never complet. Vas meant to be fifty metre long but only one third finished.

I go in. The rooms are well presented - very simple and minimal. The precious objects are in a series of glass cases. Each is numbered but there are no notes or any sign of a panel to tell me what I'm looking at. Not that it takes much to get the gist. There are chalices, small plates, cups, those ornate holy things where the consecreted host (body of Christ) is stored and locked away in the tabernacle between shows.

It's all very famiIiar from my childhood. Every object has a sacred purpose associated with the mass or other religious ritual - benediction. christening etc. My memories are of gold and rubies. Our local parish priest, Fr. Whelan (same as my grandmother's maiden name), was an Irishman with a taste for the exotic and expensive. He had a fearsome reputation as a fund raiser, turning up unannounced for breakfast at parishioners' homes and demanding to know why our weekly contribution to church coffers was so small. He was one of the first priests, to my knowledge, to develop a system which did away with the blind offerings which had been standard previously. He wanted to know exactly how much everyone was giving. Families signed up for set amounts and Fr Whelan personally kept track of progress. There were implied threats, withdrawal of privilidges. He stripped the church and the presbetary bare when he retired and took his loot, his ill-gotten gains, back to Ireland with him. He had a big hand in causing my mother to lose her faith. She became disillusioned with his greed and then the church dumped the Latin mass and changed the service so the priest faced the congregation. She much preferred his back.

Anyway in Perast, Montenegro, on the shores of the Kotor Bay  where this story takes place, silver was the precious metal of the day. These pieces were remarkable. Ornate and superbly crafted. Every culture has its collection but I am still surprised when I come across such a collection in places so remote. This area would have been a remote appendage on the backside of the Serbian/Venetian/Ottoman/Roman empire. It's hard to imagine how trade and communication took place over the imposing mountains of what would have been an inaccessible area. The sea would have been critical for food, trade and communication.

The vestments were equally impressive, as was the sunlit filled, but incomplete nave of the church. Religion inspires amazing creativity and has supported so many exquisite craftsmen over the millenium I am almost prepared to forgive the hell that they have imposed on people's lives. No, that's going too far.

It felt familiar, Catholic, but I knew I was in an Orthodox country, Serbian and Montenegrin Orthodox. But t/here were too many images of the Virgin Mary in styles that lacked that ornate over the top Orthodox style.

Is this Orthodox? I asked the young woman who had taken my money. No Catholic, she replied. There are twenty two churches built in Perast but twenty one of thm are Catholic. Only wun iss orthodox, she told me.

She went on to explain that Kotor Bay (Boka Kotorsky) was Venetian for two hundred years and, particularly in the late 16th century when the town of Perast was destroyed by a massive earthquake, the Venetians rebuilt it and their Catholic faith became dominant. And it's true. From the water it's a replica of an Italian town from the baroque period. Red tiled roofs, symmetrical rectangulat houses and palaces in ordered lines. Distinctly different from the rest of the bay. The Catholic/Orthodox mix repeats itself through the coast of Montenegro, while inland is the reverse with the addition of a significant Muslim influence. The Ottoman Empire failed to establish an effective long yerm hold over this part of the world. Neither did the Germans in ww1 and ww2, nor Napoleon. Only the Venetians succeeded, largely because they were traders rather than invaders I suspect.

So, what's the difference between Serbian and Montenegrin Orthodox? I asked. .She looked at me blankly. I rephrased my question. What makes Montenegro different from Serbia? They both speak the same language, same religion, same Slavic roots?

She looled at me as if I was an imbecile. Simple, she seemed to say and shrugged.