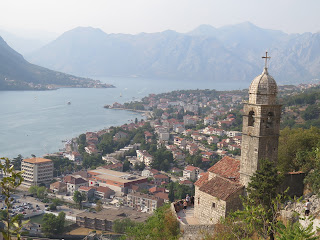 On the ground, in the hire car, on the rightside/wrong side of the road heading for Montenegro and Kotor. Twelve kilometres out of Dubrovnic airport we find ourselves last car in a long queue of vehicles which stretches up and over the crest of the distant hill, curving  left then right like a snake basking in the sun. This must be the border crossing we've been told about.

Croatia in part of the EU but uses its own currency, while Montenago is not EU but uses the Euro. Go figure. Such a small country (and recent - separated from Serbia in 2006) it can't afford its own currency apparently. The line of cars is mostly stopped. We have the aircon blasting and move a couple of car lengths every five minutes. Harry's in the back, already frustrated. Are we there yet? It's too cramped in here? Can I get out and walk? No. Just get used to it Harry. And no you can't get out. It's difficult to argue and enforce that one as he can see others walking past us. Outstripping our snail pace. Where are they walking to?

After an hour we see the border post in the distance. The air con is struggling. Harry is still whinging. The border inches towards us. It's our first day of our holidays. We've already almost died; we've visited the Montenegran capital but never left the aircraft; Jess has been admitted to hospital with pneumonia and influenza A (we heard this as we sat in the departure lounge in Brisbane - so, add guilt to that coctail of events and emotions). We're buggered. We left Brisbane 30 hours ago, fatigue is setting in and I'm the driver - "remind me if I wander into the path of oncoming traffic". Travelling at 5kph makes that pretty unlikely. "STEVE!! Watch out!"

At last we're through the border post - paperwork all okay, and we're cruising to Kotor, mostly on the correct side of the road. I remember how much I enjoy driving manuals. I' m getting my confidence up. Moving through the gears on the hairpin turns and then suddenly ..... we're looking at another queue of cars lining the road as far as we can see. Harry's chorus begins again.

I'm tempted to abandon the car and suggest we walk; to call "Thrifty" and tell them to collect the bloody car. We'd prefer to do the rest of the trip on foot. Of course its only the jet lag talking. My passengers calm me down and we crawl towards what i realise is the Montenegran border - the last one was goodbye Croatia. This one is welcome to Montenegro.

What is it about borders? I thought Europe had decided to open them. Oh yes, I forgot. Montenegro is in Europe but not of Europe - despite its currency. Montenegro is so protective of its tiny landmass that you can't bring across the border more than one (1) kilo of food. That's less than lunch for our carload. Luckily we didn't plan ahead. The guards are pulling apart a kombi van ahead of us. Clearly importing contraband sandwiches and more than four pieces of fruit. We must look too exhausted to be smugglers, so they let us through.

The next hour is largely incident free as we track along fifty kilometres of beautiful waterways - Kotor inlet. It's the largest fjiord in southern Europe. It'magnificent. I have to concentrate so can only see the spectacles as they appear around bends in the road through my windscreen. That works perfectly until we are within sight of our destination and I am momentarily distracted by the overwhelming beauty of the scene we're passing through and veer, not left (bad) but right, towards the water.

"STEVE!! WATCH OUT!!" There's a loud bang. My external rear view mirror has kissed a parked car. It's loud, but I look, and we still have a mirror and there's no way I'm going to stop and inspect the damage. Or leave a note. It's been thirty three hours in the sky and in transit and on the road and I DON'T CARE! Is that bad? Have I done a bad thing?