Montenagro - my near death experience 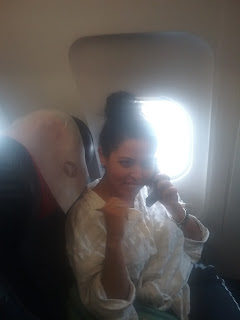 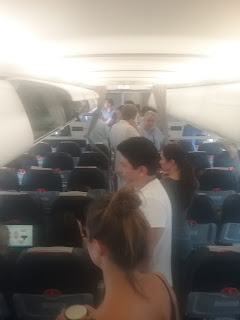 This might look like an everyday image of people exiting a flight? Wrong. It is in fact a shot of a planeload of frustrated passengers sitting in an A320 on the tarmac in the backblocks of Montenegro after trying unsuccessfully to land at Dubrovnic three times over a 45 minute period, each time aborting the approach at the last minute due to strong crosswinds. We'd get within a few hundred metres of the ground and things would start to buck and sway and the pilot wisely powerered us into yet another circuit.

The first hour was delightful. Ibtis, a young woman born in Morocco and resident of Paris was  our entertainment captain and authority on all things French and Moroccan in that refreshing way only optimistic young people can be. And then the pilot informed us we were gong round again, and we thought he said not to be concerned as we had fuel for an hour yet. At least that's the message we got.

So, of course that meant that on every circuit of Dubrovnic we were acutely aware of the minutes ticking by. That was of concern of course but, when, at the fifty minute mark he told us we were heading for Montenegro we flipped. The minutes slipped by while we seemed to be gliding over open ocean with our dwindling fuel supply and our eyes watching the second hand spin around our wrists.

People's responses varied. Ibtis, who has deep olive skin, developed an English complexion, Andrea seemed to be meditating, though it could have been symptoms of a severe state of shock. The woman opposite us just started throwing up and her partner seemed to be sending an awful lot of texts. In front of me a woman continued to do an intricate traditional needlework piece depicting an airliner plunging into the sea. For my part I was, for once, completely unable to lighten the mood.

I was preoccupied with survival plans. The nearest exit door - check; location of floating device - check; read the emergency card - check. Then the scenarios. Land on water - minimal chance of survival; land on runway and flip, or over-run the strip - better chance; land in a paddock - not much better; run out of fuel and ....- not good survival prospects. It was then that I became really scared. I had this growing sense that perhaps the pilot had lost his nerve. I had an image of him in the cockpit curled into a little ball in the grip of a panic attack. Then my brain sent me a series of headlines - MH7 OR 17 whatever it was, all the disasters it could muster in a series of quick flashes.

And then I relaxed. I was surprised. I felt calm. Andrea said she felt the same. What would be would be.

Ibtis had the window seat but couldn't sight anything resembling an airstrip as we flew further south then inland until, suddenly there it was - what looked like a 100 metre bitumin strip with a few light aircraft pulled up alongside. It truly looked like a plasticine model airstrip it was so short. I've never experienced a plane pull up so quickly.

The cabin crew had no idea where we were and the pilot seemed to have no plan B. So here we sit, and sit. Maybe this will be our first night in Montenegro?

No wait! We've just been informed that we're going to have another go at Dubrovnic with a new tank of aviation fuel and if that fails we'll be heading back to Istanbul.

Jo and Rich and Harry are in Italy, in Bari, sitting on the tarmac awaiting their opportunity at immortality having been diverted there for  the same reason.

Quite a start to our Croatian holiday. We can't even get to land there.