Stories from the West 4 - The Beginning 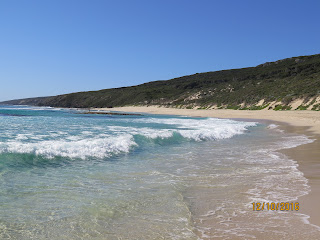 The back window taped with  black plastic to make the van look like a hearse we had a day to fill in. We felt a little vulnerable as we pulled into the Cape Naturaliste car park. Signs warned us to 'Beware of Thieves". "Look Lock Leave" they advised. So we did. To the lighthouse, then a forty minute walk around the headland towards the whale watch point. And there they were. In spades. A way off but when the wind dropped we could hear them blow. The wild flowers along the track looked marvellous any the van was still there when we got back. Good start to what I had expected would be a bad day.
So far so good.
The water in the bay was turquoise under the pastel blue sky. The sand was blindingly white and the sea calm. I plunged in. Silly really. We're close to Antartica here so why wouldn't the water turn my head into an ice cube. It did. And I held my breath with the belief that intense pain is generally only temporary. That once shock sets in the body no longer feels the cold. And it proved correct. I survived and stayed until I was dangerously close to hyperthermia. Wow! It's great to feel so alive when death could be so near. 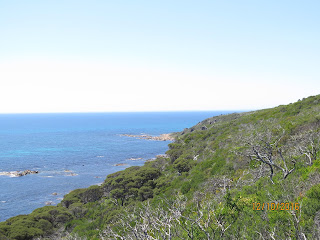 Yallingup, a few ks distant proved to be Paradise so we made a plan. Get the glass fixed in Busselton (we decided not to go there for the second time - strangely the Busselton Bypass is the way into town) and head back to Paradise; arriving in time to see a sky blazing orange as the sun set over the sea.
I believe the holiday has begun.
Andrea was in hyper-alert mode most of the day and suffered a series of PTSD moments  triggered by my selection of reverse gear. She was sure there were more trees ready to launch themselves at us. 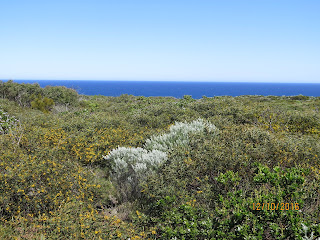 Terrific series Steve, enjoying it. Good job. Carry on. Seems a world away. Well I guess it is a half a world away...