Caravan Parks
There are some awful caravan parks in Australia. The ones where they've chopped down all the trees so the grass grows green and unimpeded. The notion of shade and protection from the elements is sacrificed in the name of smaller camp lots and more income. WA has its share. The best ones are still in the hands of local councils and offer waterfront views AND trees. Augusta has two. Both on the water and both old school.

Wineries
Back in Margaret River, the young girl at the tourist information bureau understood our needs and that's why she had recommended the Big Valley sheep property. Strangely she steered us away from Peevelly which turned out to be a beauty. She was right about Big Valley and she was right about her recommendations of wineries. Yes, it was a bleak day as we packed up and bad the bleating sheep goodbye.
It was 10am and Andrea was definitely not interested in wine tasting at that hour. She was much more enthusiastic as the day progressed. So I tasted and she browsed at the Stella Bella winery. We weren't being served by Stella but the next best thing. Donna knew her stuff. And since we were her first and only customers for the day she gave us her full attention. I was invited to taste anything, any vintage while she patiently explained vintage and climate and grape variety to someone who had heard it all before but forgotten it each time before he got to the exit door of the cellar. Cousin Vince had said: taste everything but don't buy it at the cellar door. Buy it at BWS in town at discount prices. How unscrupulous. It's like downloading music and bypassing the musician. I had to buy. Was it because I liked the wine? Was it guilt (payment for twenty minutes of informed conversation)? Or was it a compulsive shopping addiction?
I felt much better about my purchase at Stella Bella than I did later at Voyager Winery where they ask you to pay by the taste (25ml) and then offer you it back if you buy a bottle of their wine. Of course you buy a bottle of wine. After investing $15 in sips you want to cut your losses. Its a like the roulette wheel - you just hope that you can take something away from the disastrous experience so that you don't feel so dirty. So stupid. It's a form of blackmail. On the other hand the wine was quite nice. Probably better than most. But I did spend more than I would have at any normal wine outlet. Stupider and stupider! (at $4 for 25ml, that would make a $50 bottle of wine worth anout $120 to them! That's just greedy. And here's the rub. Voyager wines was started and is still owned by a very very wealthy man - it's really just his hobby.)

Hospitality
The fish at the Augusta Cafe was cooked by a young Sri Lankan boy who worked for a Frenchman who had come to WA via South Africa and New Caledonia. The coffee at Yallingup was made by a Spanish girl who worked for the cafe owner who was from Italy. The waitress at Watershed Winery where we had lunch was Italian from Roma. She spoke Ittle English and as a result the orders became totally confused. She was lovely. She'd come to WA and lived the first three months with an Italian family who never spoke any English. The girl who ran the Prevelly caravan park and complained about the cold weather was from Estonia. Everywhere, young European migrants/bacackers are running the tourist industry. I felt like I was in Europe. I couldn't figure out if these were low paid jobs that only backpackers would take or if these young entrepreneurs just saw an opportunity to make their way in this sunny climate and took it on. I think the latter because there were so many of these voices in so many places it was impossible to not conclude that something special was going on. And many of them weren't the dogsbodies but the owners or lessees.

Getting used to gray cold days. At least it's not raining. 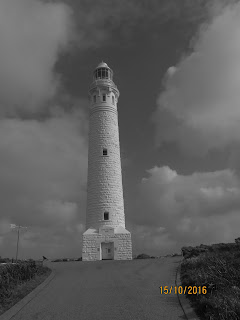