Stories from the Wet West 7 - Ways of Seeing 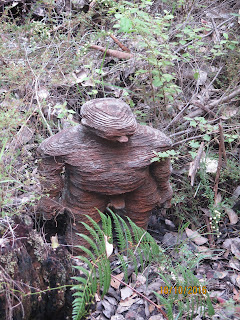 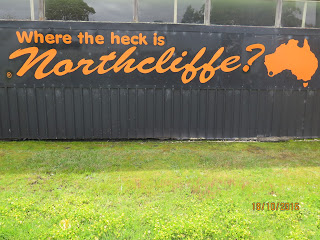 Ways of Seeing. The title of a book by social commentator and philosopher John Berger. His book was an early version of a graphic novel in that there were more images than text. He was exploring how our social and cultural experience influences how we see the world. He used art as his reference point in pursuing his thesis and , as a Marxist (as I recall), he was deconstructing the lens through which we see the world.
Sounds very deep. It was an influential text for its time. Don't expect a femininst or Marxist treatise in this blog. Expect something much simpler. How art can make us see differently. A similar but simpler theme. In Northcliffe in SW WA there is an art trail. In nearby Pemberton, we were asking questions about what we should see in the area. The attendant was quite helpful, singing the praises of the her home town and guiding us to a bush campsite that turned out to be magic. When I said we'd  be heading south the next day I asked about our next port of call, Northcliffe. What was there? Nothing much was her reply. One pub, one shop. Nothing else worth mentioning. So as we entered Northcliffe there they were, the pub and the general store. She'd not mentioned the cafe with terrible coffee. For that I forgive her. She had also not mentioned the award winning pioneer museum and the Sculpture Trail. Being a bit drawn to arty stuff we followed the signs which promised this art trail. "Understory" proclaimed the signage. A clever play on words that I myself might have dreamt up in my days in arts project management and been proud of, unaware that it was way too subtle fot the busy tourist with multiple competing slogans and clever titles to wade through. 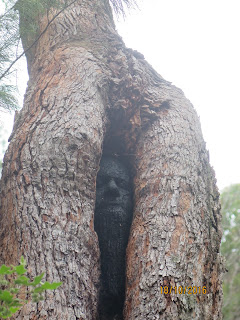 But we'd heard a Iittle about it so we paid our money and went for a walk. Forty minutes later Andrea and I were both in raptures. Without any shared conversation we had had the same experience. What began as a wander along a meandering path with the work of sculptors set in the landscape became a walk where everwhere we looked became sculptural. It sounds corny but I became convinced that natural pieces were in fact deIberate sculptural works. Part of this response was influenced by having to look to find each of the pieces so I was tuned into sculptural forms. They were everywhere. In branches, in the way native grasses suddenly appeared and disappeared, in the shapes of trees against the sky, in root formations. It was quite astounding. Many of the artists works appeared in different guises at unpredictable and subtle points along the track. The result was that you were alert to the possibility that at any point there might be another face hidden in a burnt stump in a blackened tree or a minitature figure in the landscape, or a piece high up in the canopy. We were "looking and seeing" rather than merely being in the landscape. I was blown away. We both were. 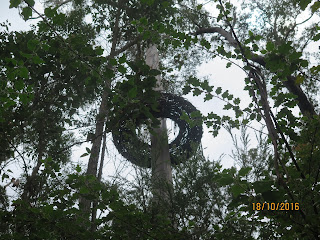 It was one of those rare moments when something really new happens and your consciousness is altered. I remember having many of those moments when i was young and first discovering art and theatre and music - my first encounter with Ray Hughes Gallery on Enogerra Tce in Brisbane - John Olson, Rosalie Gasgione, Davida Allen; a visit to the Musee d'Orlay in Paris featuring Monet and the impressionists; my first visit to the weatherboard cottage that was La Boite Theatre in Hale Street Milton, where the stage was the tiny living room of the house and the audience sat on bench seats around the perimeter of the room. I watched actors up close, so close I could see their spittle. It was Thomas Keneally's 'O'Halloran's Little Boat'. I'm not a big fan of classical ballet these days, but my first experience of Swan Lake as a teenager at Her Majestys Theatre was unbelievable. I fell in love. My aesthetic sense was awakened. What possessed my working class parents to take me to see that, and in the same year, the Sound of Music I can only imagine. I guess they were never quite the stereotype of the struggling working family that I still think of them as.
It happens less nowadays.

I am from Northcliffe and Understory is my ....well, I don't really know how to describe my relationship with it...it depends which day you speak with me. Some days I feel great pride, other days I begrudge the vast amounts of my life that I have invested in getting it started and keeping it going.

Your post, therefore, hit a home run with my heart and I thank you for that.

We - that's those of us on the Southern Forest Arts committee - always think of it as a love letter from those of us who love this place to those who may one day visit and learn to love it.

We welcome you into our circle. You 'got' it.

If you're ever back this way. Look me up.