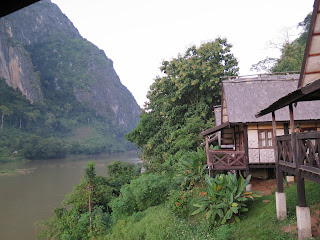 Day 6. Nam Kiau. The mad bus ride took us to Nam Kiau. Surrounded by vertical cliffs and in a bungalow overlooking  the Ou River this was a special place. Hard to describe really. It was just the quiet, the tranquility.When we returned to Luangprabang the next day that serene town seemed like a madhouse.

Day 7. Ever driven at breakneck speed for three hours down a mountain passing other vehicles (always) on blind corners or crests of hills? It's adrenaline rushing stuff. We had the good fortune to be sitting directly behind the driver so we saw all the near misses in technicolor. Amazing how many dogs, ducks, bullocks, chooks, children can find their way into the path of a minibus in one afternoon. This was the bus we passengers had bribed to leave on time - so it wasn't as if we were running late. 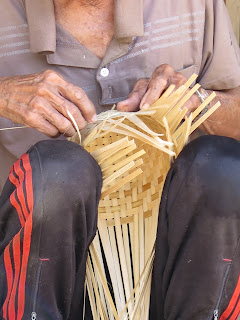 Day 8. Ben (Beh), the manager of our hotel in Luangaprang, has flown to Vietnam for a few days to check out his (prospective) new wife. Turns out the woman/girl who is filling his role while he's away is his sister-in-law and is also Vietnamese. I know Laos custom requires you to marry outside your immediate village community but is that taking it too far?

Day 9. So any French speaking tourists in Laos. French colonial history seems to draw them back. They are by far the largest group of travelers in the country.They are mix of young and old and are invariably charming and unpretentious..To Stephane, Nicola, Cecile, Olivia and all the other intrepid explorers - bonjour et merci beaucoup.

Day 10. Vientiane. Feels like a city albeit a pocket sized one. Traffic, rubbish, building projects, signs in our hotel declaring sex workers were not permitted to use the rooms. Still it feels largely untouched by the scourge of rampant drugs and sex tourism. It is sedate. Great coffee served by a lovely and helpful Chinese girl who came here to work on the hydro schemes and now makes flat whites and great espressos. Paul Ryan, who scoured Europe searching for "flat whites", would be impressed.
Posted by little hat at 21:36