Cambodia Day 11 - 13 Suk Veasna - Temple Guide, The Blacksmith and others 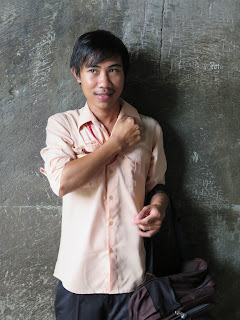 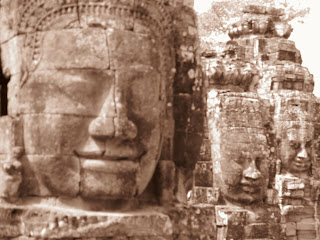 Day 11. Flew fro Vientiane to Siem Reap.Got abused by immigration for not getting my departure card stamped on arrival - go figure?

Day 12. Day of Temples. Second 4am start in row. Spent 7 hours with Sok Veasna, our 22 y old guide with an obsession with pretty girls and the havoc they wreak on the world. His 20 word take on the Hindu epic, the Ramayana,  was priceless. Many years ago I saw Peter Brook's theatre version of the Mahabharata, the sister story to the Ramayana. It ran over three nights, a total of ten hours. Vesnae's took less than a minute  (there may  be more to it as  it's an epic poem  which runs over several hundred pages).

"A big fight between two gods over the Goddess Lakshmi  aka  Sita  which involved  all their forces. So God  versus God, man versus man,  animal vs animal  (the Ramayana is full of mythic animals  - monkeys as minor gods  (Hanuman), giant birds (Garuda) which carry the gods into battle, seven headed cobras etc etc)  all to win the favour of the beautiful girl. Pretty girls always cause too much trouble!"

I said I couldn't comment as I had avoided that problem. Andrea  glared  and stored it away for the future.

Veasna had apologised at the outset for his poor English and then proceeded to talk and play the comic for the remainder of the day. We fell in love with hi and his quest to understand women. He was concerne3d that he  would never be attractive to the  pale skinned Cambodian girls as he was too dark. If that were  to happen he said it's called: "Frog eat Goose" (their frogs are big brown monsters similar in appearance to our toads).

Beautiful temples, Great Hindu/Buddhist history.  You  had to be there. (Some photos on this blog) 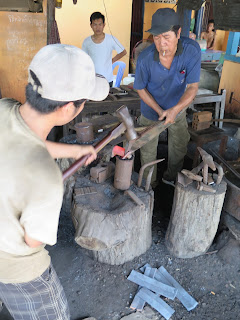 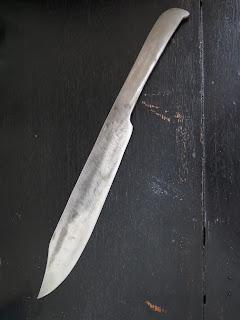 Day 13. Became a blacksmith  for a  day. Made kitchen knife using a sledge hammer and an angle grinder- with a  little help from a master blacksmith and his three assistants.He was 69 and as fit as a malley bull. The knife began life as a length of steel reinforcing rod. I wielded one of the hammers and the sound of metal on metal rang through the  streEt as we changed the shape of that thing until the magic happened. I did bit of angle grinding to remove  the black coke from the surface and he did the  final shaping and sharpening. Luckily I had an interpreter as no one  spoke a word of English.  His  workshop was a ramshackle patchwork of corrugated iron thrown together to protect the space from  the sun, no walls, set up  in front of his humble house.fro there he produces scythes, hoes, cutting impleents of many shapes and sizes at the  rate of about 20 a  day.He's been doing it for fifty years.
Posted by little hat at 11:01