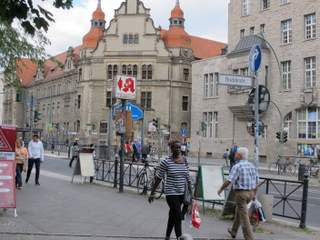 Muslim women, black Africans and gays on Karl Marx Strabe. Hitler and his henchmen set out to eliminate all of these, and particularly the Jews, from German society. I knew some of this but the details were harrowing.. I didn't realise, for instanc,e how deep-seated and historical was the hatred of the Jews in Europe. It preceded Hitler. He became it's ultimate expression.


I spent three hours today at what is known as the Topography of Terror site. An area based around the massive Third Reich central administrative complex. In a wall of information and in a specifically dssigned building, the story of the rise to power of Hitler's National Socialists was told in unforgiving detail.

Ironically only Goring's Luftwaffe headquarters survived the allied bombing and stands today as a reminder of the excesses and the ambitions of Hitler. He and his architect,Speer, had designed a new Berlin as the capital of the new German dominated world. It was to be named Germania and the central building was to be a closed, covered arena which could hold 200,000 people.  The scale of the vision was monstrous.
Posted by little hat at 05:51

Hi Steve,
Good to hear you immersed yourself in the history of Berlin. Hope you had some fun as well!