There's not many cities that can do that to you in the space of a few hours. !2 houris ago i would have said that I was underwhelmed by Berlin. Our apartment is in a five story 1980s block of east Berlin apartments. Our view is of the largest construction sight I have seen in my life - think three whole blocks of a major city. The walk I took introduced me to a bland landscape of shop fronts including Starbucks, MacDonald's and Pizza Hut. And, where a day ago there were baguettes and boulangeries on every corner, there was pumpernickel bread and supermarkets.
Twenty four hours is a long time in the life of a tourist. I am gobsmacked. I'll try and be brief but i could fill pages. 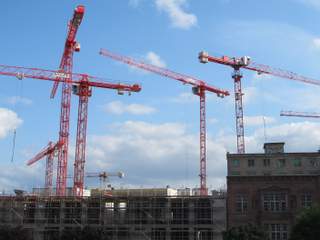 Okay lets start with accolades for a young orange bearded Belfast born guide with a PhD in German folklore. Thank you Finn. In a five hour walk he turned my head around. What history, what turmoil, what a city of contrasts, contradictions and devastation.

Built on a swamp with a constant need to pump water from beneath the city, Berlin has been destroyed and rebuilt many times over. I knew it had a Nazi German third Reich history and a East West Berlin Wall Cold War history but nothing prepares you for the evidence of that.Even the evidence of that which is invisible is compelling.

The building we are staying in, for instance, turns out to be one of the last East German apartment blocks built before the wall came down in 1989. That's gives it some redeeming qualities. some historical significance but wait - it's built on the land that once housed the Albert Speer designed house built for Adolf Hitler - a house the size of the shopping complex I referred to earlier being built outside our window. The bunker in which Hitler suicided sits 100 metres away. 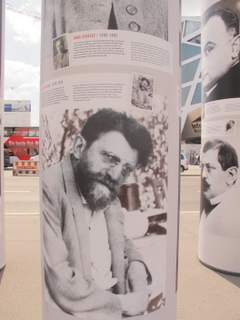 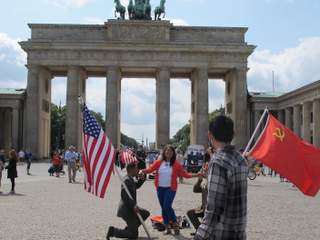 ﻿
CSo what is Berlin after one day? All of those words I began with. A sense of exhilaration that a nation could survive such turmoil and be committed to confronting its own history. Everything is acknowledged  - the tragedy and madness of Hitler's regime, the folly and pain of the Cold War era, the Jewish legacy, the horrors of war and the indulgence of capitalism. Only one element is not spoken about or signed, and believe me there are stories on walls and monuments and street fronts everywhere. The German people still struggle with a horrible fear that it could all happen again. As a result, all physical evidence of Hitler - his home, his bunker, his life have been eliminated. There is not even signage to indicate where these might have been.There remains a fear that he could still become a hero to the far right in this country. That these sights might become pilgrimage or worship sites. Even now it is illegal to stock or sell copies of his book 'Mein Kemp' in Germany. Some say it should be studied in schools to understand how this madman came to power; others fear it might ignite a new madness.

And the appalling and confronting. The, to my eyes, crass rush to commercialise the city, the bizarre way the history is turned into an amusement park, the experience of seeing and hearing the squeals of teenagers playing in the maze at the memorial to the Jewish victims of the holocaust. All this beside some of the most honest and moving tributes to humanity I have exer experienced.
And it's only day one! 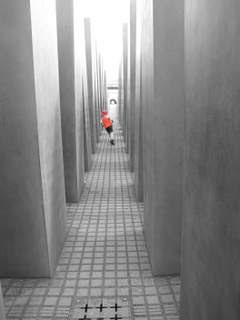