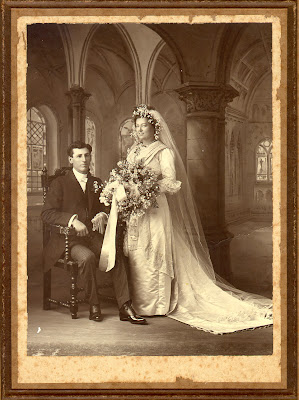 I am surrounded by reminders of my mortality. I decide to visit Sydney to track down some family sites which I hope will help me fill in some gaps in the family saga. I call my cousin and suggest we spend a couple of days together exploring. The visit will coincide with an old friend's 60th birthday celebration.

I arrive three hours late after my flight out of Brisbane has been cancelled and a seat found for me on a later plane. Cousin Steve picks me up at the airport and we talk about the state of the nation and his state of health. The economy is pretty shaky and Steve's year hasn't been much better. He's had a hip operation and then a strange virus which doctors couldn't identify but which attacked his heart. He makes light of it but later his wife tells me he's definitely not running on all four cylinders. This is ironic for a man with a passion for cars. He has a 1950 something MG TF convertible in his garage which he has done up and in which he goes touring. He and the car both look pretty good but they are, to be honest, both getting on.

Steve and I spend a day mooching around inner city Leichhardt uncovering a series of Italian and Irish connections. Leichhardt was, and is, Sydney's 'Little Italy' and was the first port of call for many migrants looking for affordable housing. The Fruit and Vegetable shop from 1910 has gone but a few locals tell us there was still a fruit and vege business on the corner of Paramatta Rd and Norton Street until the recent past.

The Kilcoyne family (two Kilcoyne girls married two Capelin boys) had settled in Leichhardt in the early 1880s, about the same time Lorenzo, the original Italian connection, was disembarking from his disastrous venture to the Pacific with 200 other Italians. Their house is still there and the woman living there is home and shows us through. We are following a warm trail. We visit the local Catholic Church, St Fiacres, where the weddings took place and confirm that the wedding photos were definitely taken in front of a backdrop featuring fake pillars. I check out St Mary's Cathedral the next day hoping to find the very pillars there - but am again disappointed. We track down two other houses built by various members of the family and have a coffee at Bar Sport, a place that my Sydney friends tell me later is an icon of Norton Street. The coffee is good.

The next day I am at my friend Mark's house in Glebe, having slept on the floor overnight. He's the one turning 60. His family have arrived from Rockhampton and Perth and we are 11 in the house over three days. Well, most of them have. His sister in law can't make it as she is nursing her sister who is seriously unwell. I also learn that a cousin of Mark's wife has been knocked down by a car and taken to hospital the day before. She's from Israel and looked left instead of right as she went to jog across the road on her morning run. Her partner was well in front of her and didn't know she'd been hit, only that she never arrived back from the run. Sydney's like that. People disappear all the time. After a series of frantic phone calls they track her down. She's okay. It was only a glancing blow.

Around mid morning a call comes from another relative apologising that they won't be able to make the party. The husband has just been taken to hospital having suffered a heart attack. It's turning out to be quite a weekend.

Understandably the conversation for the remaining two days often revolves around health. The party goes well. No one is taken to hospital, though a few are going home a bit worse for wear thanks to Mark's generous bar tab.

I visit the Police Museum and am disappointed to find I don't have a National Security file - I was always too afraid to really stick my head up too high during the Vietnam protest years.

Next day Cousin Steve and I drive to Woollongong to visit our only remaining uncle on the Capelin side. Cyril is 83 and pretty unsteady on his feet but he has a memory of a teenager and tells us stories with people's names, dates and even the time of day. He swears his longevity is based around his heavy diet of dairy products and cream. 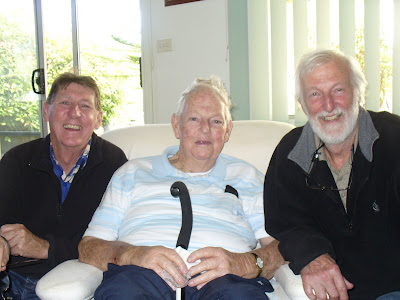 On the way back to Sydney for my flight home I get a text message from my wife, Andrea, telling me that my younger brother has completed his angiogram procedure and that they've inserted a stent into one of his major arteries. He's going to live. He retired three weeks ago and has been at the hospital every other day since then having tests after some chest pain. Can I pick him up from hospital the next day as his wife is on crutches after foot surgery and can't drive; Andrea isn't available as she'll be at work - its her third last week; she's been retrenched.

It seems I'm the only one left standing. I feel fine. But I do have strange thoughts as I swim my twenty laps of my local pool where I wonder how long it would take the other swimmers to notice my body on the bottom of the pool if I karked it mid swim.
Posted by little hat at 17:19

That did read like a disaster movie?! LOL. Glad you didn't kark before you finished typing it! Hehehe!

What a saga. Why do we leave it till our forties and beyond to explore our ancestry? I ask myself often.

We leave it till late in the piece when our bodies begin to fall apart and many of those a tad older are on their way our or have already gone.

But I trust you'll keep on standing tall.

I have noticed that men in particular get preoccupied with their health. I belong to group who meet on the last Weds of each month; I had to stop going every month - the conversation revolved around body part replacements, dodgy tickers, medication and funerals.

Good to read about the progress of your task!

Jinksy,
good to heqr from you. Yes it felt like a slow disaster movie unfolding around me. Of course artistic licence has played a part in heightening the effect.

Elisabeth,
it is interesting that we leave it so late. I guess we suddenly feel mortal as our oldies start to fade and some urgency kicks in.

Jane,
was it a group of men you were consorting with? and why do you think men become so obsessed? Maybe we start to see that our women won't necessarily be around or capable of looking after us? Or perhaps men pride themselves on being such physical specimens that the twinges of old age herald some loss of power and control?

Ah! It is all sixtieths and funerals from now on. And organ music.

I live in Annandale which is the suburb next to Leichhardt and was interested to hear of your family links to the area. I have recently started exploring my family tree back in Ireland and have foond a situation similar to yours where most of the family members I speak to are peoccupied with their health (and for good reason, most of the time.)

When I was in hospital recently it opened my eyes when I realised how many people similar in age to me (46) or slightly older were on a huge amount of medication or had a litany of physical copmplaints. I feel so grateful that I was in hospital as the result of an accident from which I will fully recover and not because of complications due to a chronic illness.

I am sure you'll remain standing for a long, long time.

Just a temporary setback, Steve. I am back cycling and swimming in the lake here today - mortality postponed for now!

I got to the end of this piece and I looked at the photo of the three of you and the word "gratitude" was what entered my head. Funny that Selma had a similar reaction to the post.

All any of us has is now. How lucky we are to have it. And we're lucky your sharing yours with us Steve.

Very interesting; I like the way you weave family and personal stories into a narrative of events. I resonate with this because I lived in Parramatta Road Petersham many years ago, when I was first married, and some of the beat you cover was my beat. I still yearn for Sydney, though I know I can't live there. Reading your story makes me realise how fortunate I am, though, in my health, and so far, the health of those I love.