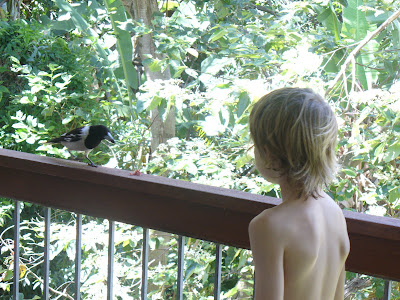 I've just spent a week watching a DVD of Bindi and the late Steve Irwin of Crocodile Hunter fame. I never was a fan but Bindi, age about 8 in the DVD, and Steve were quite a team. She's the mature straight man (if I can use that term) and he's the playful child messing with dangerous animals (and finally getting too close to one particular stingray).

I can remember where I was for a small number of major events in history as they unfolded over my lifetime.

I was walking past Our Lady of the Assumption Church, Norman Park, as a 13 year old when I learned about the assination of JFK from a passing motorist. (November 1963)

I was in the Music/Media Room under the University of Qld Refectory watching Neil Armstrong step on to the moon in the late 60s. (July 1969)

I watched the 9:11 drama unfold on my home TV screen early in the morning of that terrible day in 2001 and then watched it replayed hour after hour at work in my office at Indooroopilly. (September 2001) 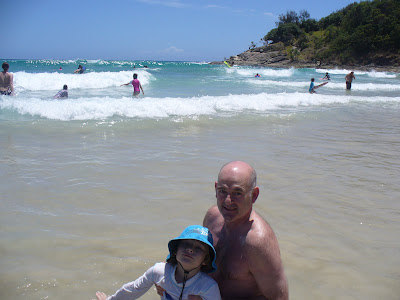 In 2006 I was camped in remote Central Australia at Kings Canyon having a glass of wine in a camp chair watching the sunset when news swept the campground that Steve Irwin had died. there was no TV, no radio, no media. Someone had picked up the news via their CB Radio. The camp ground was stunned. (September 2006).

For a period Steve sat beside JFK, Neil Armstrong and the 9:11 event as a moment of international significance. How do you figure that? They all occured in the second half of their respective years; Steve and 9:11 both in September. It's not a hugh step to develop a conspiracy theory around those facts.

No I haven't gone potty - just the price of a visit from 7 year old nephew Harry all the way from London.

Brisbane born and London raised he has an unusual take on his birth country - this last week we had daily visits from wallabies grazing in the backyard of the house we were renting on Stradbroke Island (plus families of kookas and butcherbirds which we fed from the verandah). 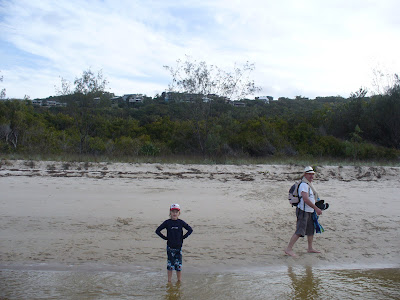 As far as Harry's concerned it's true, we have kangaroos bounding down our main streets in Australia. And Bindi is set to become the second female Prime Minister with young Harry as her consort.

Now what to buy harry for Christmas? A date with Bindi?
Posted by little hat at 11:45

Hey Steve thanks for the visit - unfortunately I'm working Wednesday night so I'll miss that one. WHen would you like the photos taken? I'm happy to do it if I have time...
By the way... that Bindi is a bit weird, don't you reckon?

I did a post once on where I was when such and such happened ... I didn't include Steves death but I remember I was in a pub with some Aussies nearby, an irishman turned to them and said "I'm sorry fellas, he was your Princess Di wasn't he?"

Anyway I had never seen his daughter before - so I googled her and realise I must seem very ignorant ...

Awwww!
Was just thinking of yous out there this morning.

Hello Harry and Jo and Richard.

I won't be there either. It's all Courier mail photographers. Not as good as ypours and other locals in West end pages.

Re photos. I'm away all January. I could do a list for you before I go and you could do the photos over that period OR I could take you on a drive in early Feb and do it as e go.

The deadline for the final content (words and images) is end of Feb.