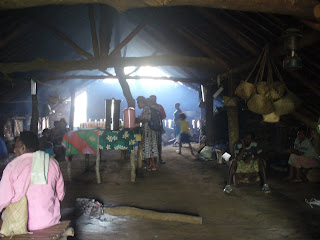 Our plans for the week have been thrown into some confusion as the mother of the project coordinator has passed away. She died as we traversed the blue Pacific. We unpack our bags and create a rudimentary sense of home in our concrete floored room. We don't have any family photos to hang on the wall but with a rearrangement of chairs and the rough bush-built side table it feels pretty good; despite the fact that our tent style mosquito-proof beds dominate the room. It feels like we should be outside under the stars with these contraptions but, as the area has a reputation for sudden heavy downpours, the locals advise against it.

Our colleagues ask us to follow them to the Nakamal. The village has been summoned by a series of simple strokes on a slit drum, a hollowed out log with a lengthwise cut in the top to create resonance. The length and diameter of the log determine the pitch. Our coordinator's mother lies in Port Vila but there will be a Kastom mourning ceremony here this afternoon as a mark of respect for this well known old woman. She was a Pentecost woman (woman blong Pentecost). I am 'man blong Australia' - 'man Australia' for short.

As we approach the entrance to the large unlit building we are greeted by a wailing and crying which sets my teeth on edge. Our group enters quietly with Paul and I at the rear watching for cues as to what is expected. We join most of the group sitting on a bamboo bench sited along the side of the building. As I take my seat, two or three of my colleagues join the mourning with such intensity and suddenness that I am taken by surprise. A moment ago I had been in conversation with them seeking a little advice as to where I should stand, what was the local custom re head-cover etc.

I can remember being intimidated at large Catholic funerals by rows of elderly women, the stalwarts of the church, chanting the Mysteries of the Rosary from the Sorrowful through the Glorious to the Joyful, from beginning to end, for over forty minutes in the lead-in to the funeral of a local 'big man' of the community. But this was beyond that. Their chanting was just a mumble, a burble compared to this. 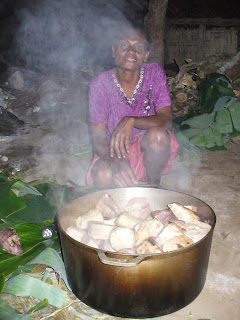 I see a woman rocking back and forth and swaying as she sobs and presses a handkerchief to her reddening eyes. One of my colleagues is transformed, transported into another state. Other women, and men, close relatives, are also sobbing and convulsing in a deep and shuddering tribute to the deceased. It is an odd feeling. I am a stranger. I have no real emotional connection. I am intent on being respectful, but at the same time I am a curious bystander.

As the keening settles our host Chief John, invites Paul and I to follow him. He leads us through the mourners to a small slightly built woman standing alone. She looks to be in her eighties. Her eyes meet mine. They carry a deep sadness in their brown and still gaze. She extends her hand. John introduces her as the sister of the deceased and she clasps my hand above the wrist and gently holds on. I know this is a moment of introduction and of expressing condolences but we have no shared language. My rudimentary Bislama deserts me. Sori, I say, and wait until I feel her grip relax and we softly let go, our hands sliding apart, the touch exchanging a kindness that my words are not capable of.

John then directs Paul and I to a rough bench-top table occupying the centre of the upper half, the women's half, of the Nakamal. Paul and I have missed the traditional welcome ceremony earlier in the day and this is our combined welcome, introduction and expression of condolence. We are being invited to share this food first. I feel humbled. I should not be given this status, especially given the circumstances, but John is clear. We must eat. I select something from two dishes. On one side of my plate I place a piece of chicken, on the other a rectangle of lap lap, a ground tuber (manioc or yam or taro) mixed with coconut milk, formed into a slab and baked in coals. It's soft and mild, not beyond my Western palate, but an acquired taste nevertheless. The chicken, highly prized I expect, is bony and chewy. In my stay in this and other traditional locations I will never see chicken breast - I wonder if the nation has a population of wingless chickens, chickens whose wings miraculously grow back, as this is the c 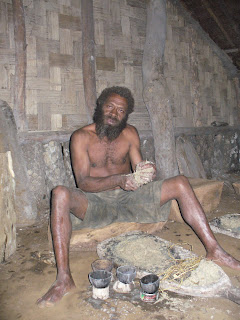 hicken piece served consistently with rice and in other dishes.

I eat respectfully. I eat everything. After a period people begin to drift out of the Nakamal leaving a team of men sitting on the dirt floor hard at work grinding kava roots to prepare kava for later consumption. Kava is a mild relaxant and hallucinogen, a drink consumed by the men as a sunset ritual. The women exit from the top of the building, the women's end ; the men from the bottom, the kava end.

Outside I learn that the older woman I have met is, in fact, Chief John's mother. John expresses his deep and sincere thanks for observing the traditional customs of the village. I also know that kava drinking is part of traditional culture and I will be faced with a decision about participating in this men's business before the end of the evening. I am conscious of being under observation. It's four thirty.
Posted by little hat at 14:33

A great series, Mr Hat. Thanks for sharing this experience.

Lots of moments wonderfully expressed here Steve. The colleagues suddenly joining in the mourning, the communication through hands, and another cliffhanger - to kava or not to kava? Love the last line as finish!